Pune-based entrepreneurs Chetan and Aditi Walunj's idea to manufacture diesel-dispensing bowsers for doorstep delivery to commercial buyers of the fuel has clicked in a big way.  It also saw Ratan Tata invest in the potential of the company. 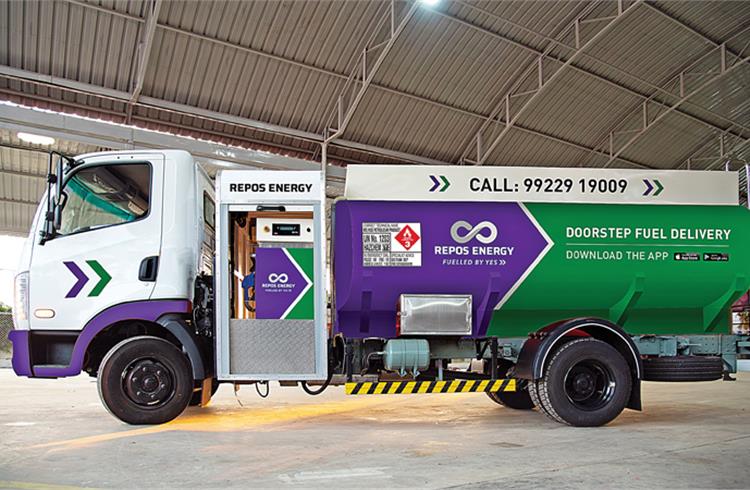 In addition to supplying the bowsers to OMCs — Indian Oil Corp, Bharat Petroleum and Hindustan Petroleum — Repos Energy is also partnering other fuel station owners to introduce on-demand fuel delivery in their operations.

Every once in a while, a new technology, an old problem, and a big idea turn into innovation," said Dean Kamen, the American engineer, businessman and inventor of the Segway. A quote that not only describes his passion and belief but, perhaps, the reality of many a successful entrepreneur.

In today's fast-paced world, investing heavily only in digitalisation does not change ground reality or solve the problem. A unique, relevant solution can also change the dynamics of the game, without necessarily increasing costs.

For Chetan and Aditi Walunj, the young Pune-based entrepreneurs and founders of Repos Energy, the thought of running a successful start-up backed by no less than Ratan Tata, Chairman Emeritus of Tata Sons, was an unimagined dream come true. After four years of immense hard work, brainstorming and developing a robust IoT system, their project has started getting recognition, having begun operations only recently.

Birth of a start-up
Chetan's journey in the world of automotive fuels began in 2011, when he joined the family business of a fuel station in MIDC, Pune. For over five years, he interacted closely with both retail as well as commercial customers who tanked up at the station. Understanding the challenges, operational difficulties as well as being asked often if there was a way fuel could be made available in bulk for industrial/commercial purposes at site is what gave birth to the germ of an entrepreneurial idea — Repos Energy. 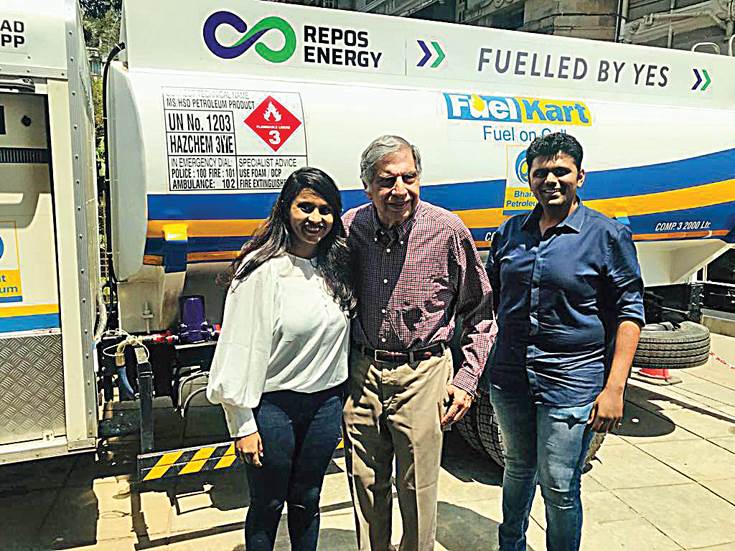 Ratan Tata, Chairman Emeritus of the Tata Group, with the founders of Repos Energy — Aditi and Chetan Walunj

In 2015, along with Aditi Bhosale, a forensics and international relations student (who he wed in 2016), the idea took shape. Aditi shares a similar passion for solving societal issues and for making fuel available in remote parts of India. With this vision in place, along with a strategy to develop realated infrastructure to achieve speedy progress, the couple began exploring the idea of mobile fuel dispensers.

Speaking to Autocar Professional, Aditi Walunj says, "Initially, since there were no vehicles available that would have a dispenser like the ones you see at any fuel station, it was difficult to provide the exact amount of fuel required at a retail level."

Thus was born Repos, which stands for 'relentlessly positive'. While the partners had no clear idea how to take things forward, they began a pilot project by delivering diesel in small quantities to hotels and companies. However, since the governmental policy then did not allow mobile sale of diesel, the company stopped the process, which meant customers continued to travel all the way to the fuel station to tank up.

In March 2017, the Walunjs reached out to the Ministry of Petroleum and Natural Gas, asking for support to introduce policies allowing mobile tankers (bowsers) to legally deliver fuel to commercial customers. According to Aditi, "Around 85 percent of diesel sales in the country come from bulk customers (sale of 50 litres and above). Having a mobile dispenser available for this type of customer can not only reduce costs but also speed up the pace of the project."

Getting dealers on board
In 2017, a Bangalore-based start-up, 'Mypetrolpump', began an on-demand fuel delivery business, which garnered a lot of interest but had to stop operations due to the lack of a sustainable business policy. "For us, this was key learning and hence we reached out to the petroleum minister to solve this issue," says Aditi. 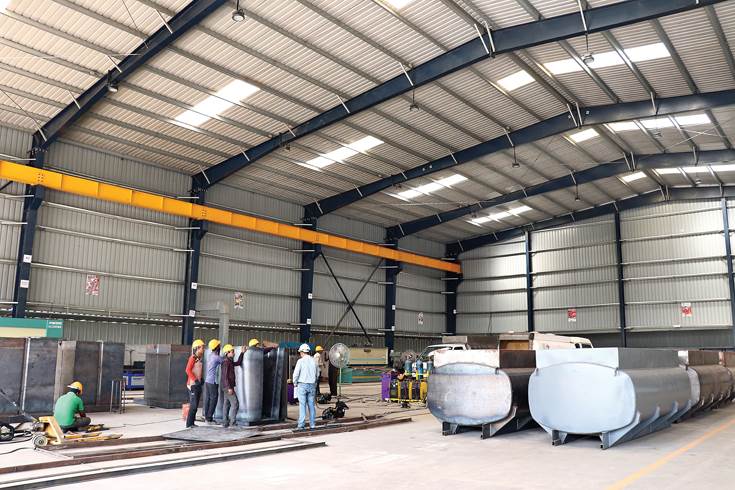 It was not long before Repos Energy started approaching petroleum dealers for their response to their diesel-on-site delivery business as well as their willingness to be part of an on-demand fuel delivery system.

"At the time, while there were no vehicles available that could replicate traditional fuel dispensers, the ones that were available (used at airports to refuel aircraft) took 90 days to manufacture by the local OEM. Also, the cost was quite high to be adopted on a mass scale by fuel retailers. There are around 66,000 fuel stations in India; if each ordered a fuel dispenser, imagine how long it would have taken," remarks Aditi.

Also, since each vehicle needs to comply with the Petroleum and Explosives Safety Organisation (PESO) standard to ensure the fuel is kept in optimum safe condition, it meant a fuel dispensing vehicle had to be designed. It helped that Repos' founders had help at hand, in-house. Chetan's father, who has considerable experience in fabrication, offered to design the fuel dispensing vehicle. He also became the first investor for the company, when he gave a piece of land to set up the small manufacturing unit spread across 2,000 square feet in Pune.

Interestingly, Repos has also begun working on the ecosystem required and IoT (Internet of Things). At present, the company develops and manufactures the tank, automation, sensors and controllers to ensure quality, quantity and real-time data availability. The company says it has applied for patents for its indigenously developed quantity sensors. 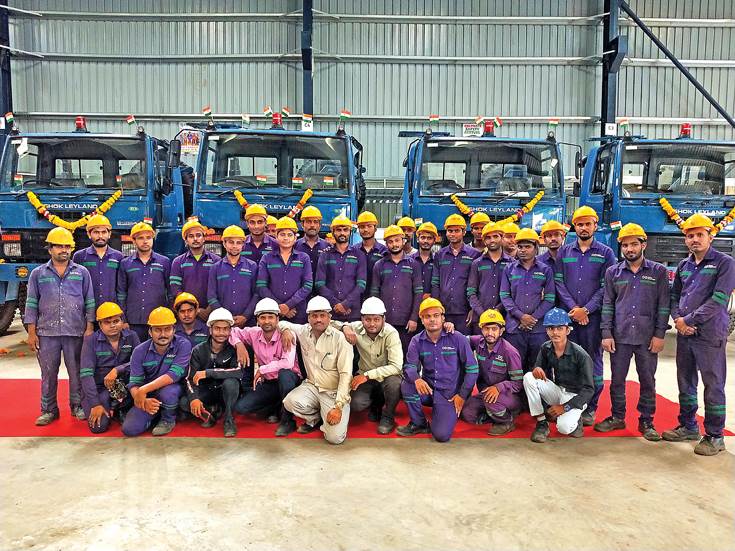 The Repos Energy team with the mobile fuel dispensers ordered by the Indian armed forces.

In March 2018, the government of India invited stakeholders for a pilot project for doorstep delivery of fuels. The participants of the project included OMCs, PESO, start-ups and the government. Repos was among the start-ups invited to participate. "While other start-ups were talking about concepts, we had actually developed the ecosystem that includes the software and the hardware part. As a result, of the 51 projects spread across 32 cities, we have delivered vehicles for 49 projects," says Aditi.

"It is important when you deliver the fuel (diesel) to the customer, he should be able to check that the quality (density) is not poor. Since we had a fair idea of what we wanted to do, we reached out to Mr Ratan Tata to help us take this idea forward," reveals Aditi.

From investor to mentor
According to Aditi, when she and Chetan were in the process of setting up Repos, they had initially approached Tata Motors but never imagined that Ratan Tata, one of India's best-known industrialists, investor, philanthropist, and a former chairman of Tata Sons, would invest in their company and also turn mentor.

Aditi recalls October 1, 2018 as a day they will never forget. "That day, we were waiting outside Mr Tata's house for several hours. However, since we did not have an appointment, we couldn't get to meet him and so left a letter for him."

As it happened, Mr Tata spoke to the Walunjs and asked them to meet him the very next day. Among the things the avid automobilist asked was, "How are you planning to change India for good?," reminisces Aditi. That moment sealed the deal for Repos Energy, the discussions having convinced Mr Tata, following which he asked the management at Tata Motors to support the entrepreneurs in their business activity.

"After that, the management of Tata Motors visited our small 2,000 square-feet facility in Pune. The Tata Motors team assured us that they will help us build the chassis and take care of the safety aspect," says Aditi.

Fast forward to present day. The company, now with the support of partners and customers, has seen high demand, which led to it expanding the manufacturing facility to 185,000 square feet. Due to the initial demand the company saw for its mobile-fuel pumps, Repos is now working with Tata Motors, Ashok Leyland and Mahindra Trucks & Buses.

The cost of the fuel dispenser, including the truck on which it is installed, ranges between Rs 13 lakh to Rs 21 lakh, depending on the fuel capacity and model. "We wanted to keep the cost as low as possible, and hence we are providing the IoT and smart app services free of cost. The customer only pays for the vehicle and the special body built on the truck."

Aditi says Repos is set to deliver 75 Repos mobile  fuel stations in the next 45 days, which includes delivering 30 units this month. In fact, apart from orders from fuel station owners, the company is also making special fuel dispensing vehicles for the Indian Army. What's interesting to note is that the company, which was started by the couple, now has an employee strength of 175 staffers.

The company claims it has been able to increase sales of diesel by around 150,000 kilolitres per month for each fuel station partner. In terms of profitability, the company has two group companies, Repos Industries, which handles the manufacturing of the bowser that has reported revenues of Rs 5-6 crore in a short span of three months and is expected to breakeven by FY2020-21. The second is Repos Energy, which is engaged in the business of partnering and bringing doorstep-delivery of fuel to customers. It aims to be sustainable and reach out to more partners and cities, that will contribute towards speedier development of infrastructure and cutting down of energy consumption costs.

Future growth outlook
The company says it will build 720 Repos diesel pumps (bowsers) this financial year and the target is to scale it up to 32,000 units in the next five years.

Responding to a query whether the company is looking to replicate its success of doorstep delivery of diesel for petrol and, in the future, diversifying into business for EVs, Aditi says:"Petrol is not viable because of its high flammability. Also, our primary aim is to serve commercial customers,
who account for 85 percent of the diesel consumers in the country. In terms of electric vehicles, we are already looking into its prospects for our company. We are a total energy solutions company, not just bringing doorstep delivery of diesel," asserts a confident Aditi.

(This article was first featured in the August 15, 2019 issue of Autocar Professional)