Evonik keen to cater to CBG plants in India

German speciality chemicals major is in talks with at least 20 companies which are setting up Compressed Biogas plants in India. 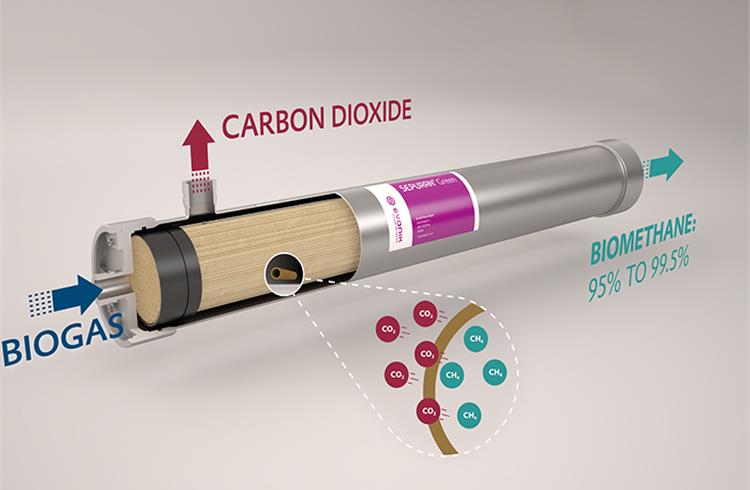 Among the eco-friendly fuels being pushed for motoring in India is compressed biogas (CBG). Now German speciality chemicals major Evonik Industries is bullish on catering to such CBG plants in India.

According to Vinod Paremal, Regional President for Evonik in the Indian subcontinent, the CBG production capacity of these plants is between 7-12 tonnes per day (TPD). Globally, the company has more than 500 CBG production plants running with its Sepuran Green brand of technology. The automotive sector is one of the biggest customers for Evonik. Various business lines in Evonik (India) supply material to Tier 2 or Tier 3 companies in the automotive industry value chain.

Paremal, in an interaction with Autocar Professional, claimed that the company's polymer-based membrane technology  involves customisation of hollow fibre membranes for efficient gas separation  offering highest CO2/CH4 selectivity and are therefore a superior technology for upgrading biogas. “The patented three-step membrane-based gas separation process significantly increases the recovery of biomethane, which has a corresponding effect on the profitability of biogas processing plants, hence making the upgrading process as efficient and economical as possible ” said Paremal.
CBG, which is purified and compressed biogas, is produced through a process of anaerobic decomposition from various waste/ biomass sources like agriculture residue, cattle dung, sugarcane press mud and spent wash of distilleries, sewage water, municipal solid waste (MSW), biodegradable fractions of industrial waste amongst others. Research suggests that CBG, though similar to CNG, offers better calorific value and can be used as green fuel in automotive, industrial and commercial sectors. The government has offered a procurement price of Rs 46 per unit till 2024 with take-off assurance of 10 years plus GST. The Indian government launched the National Biofuels Policy 2018 and Sustainable Alternative Towards Affordable Transportation (SATAT) initiative to promote CBG as an alternative, green fuel. Under SATAT, 5,000 CBG plants are expected to be rolled out across India in a phased manner and produce 15 million tonnes of CBG per annum, which is about 40 percent of current CNG consumption, generating direct employment for 75,000 people and producing 50 million tonnes of bio-manure.
India imports more than 84 percent of its fossil fuel needs. Further, with India committed to reduce its GHG emissions by 30-35 percent by 2030, it has become imperative to commercialise alternative indigenous energy sources derived from advanced biofuels tech.

Biofuels like CBG produced from agricultural crop waste is also an alternative to the burning agri residue.
Rival Praj Industries, had in November 2020 demonstrated a CBG production plant that utilises a proprietary microbial consortium made from feedstock such as agri residues and press mud.

This feature was first published in Autocar Professional's April 1, 2021 issue.