EV Power suppliers in India gear up to be in charge 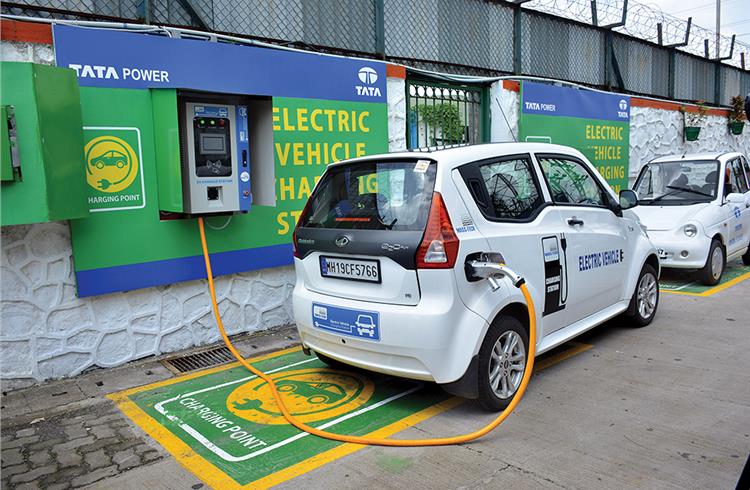 If electric mobility is to pick up pace in India, a key enabler will be a widespread network of reliable and efficient charging stations. Sensing a new business opportunity, Tata Power, Exicom Power Solutions and Delta Electronics India have plugged in for a first-mover advantage.

One of the biggest impediments to increased adoption of electric vehicles (EVs) in India has been the abject lack of charging infrastructure. Conveniently located charging facilities, ease of use and affordability have proven to be enablers of electric mobility in developed markets. With the Indian government’s push for vehicle electrification, a few organisations in the private sector have sensed a business opportunity in setting up charging stations.

Slow pace of EV adoption in India
India, the world’s fourth-largest automobile market, has witnessed a very slow pace of adoption of EVs. In 2016-17, barely 13,957 electric two- and four- wheelers were sold. In 2017-18, as per estimates, there was growth of around 200 percent which translates to around 60,000 units (55,000 two-wheelers and 5,000 passenger vehicles). While this is a result of the government’s thrust towards e-mobility, new players and new products, the fact of the matter is that EVs currently constitute a minuscule 0.26 percent of the 22.74 million Indian automobile market (April-February 2018). 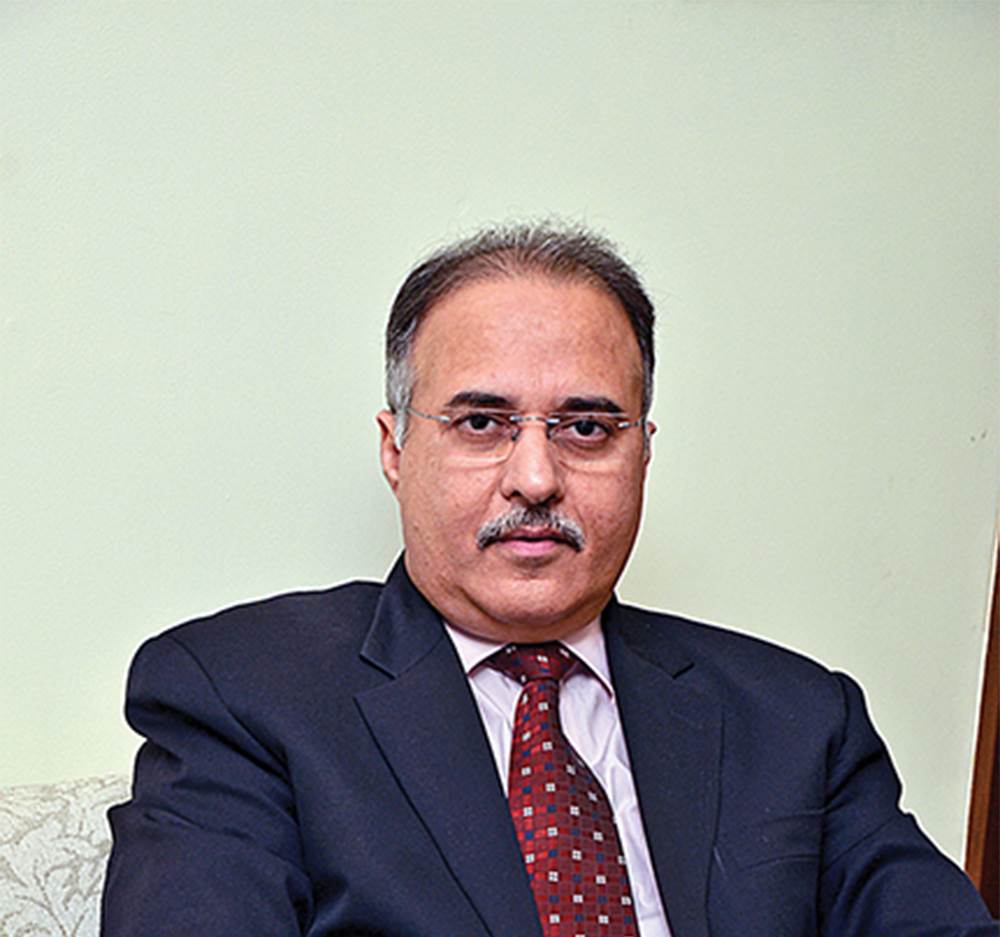 Tata Power's Anil Sardana: “Adoption of EVs in India will be driven by two major factors — policy direction and economic benefit achieved in total cost of ownership of EVs over vehicles with internal combustion engines."

According to Tata Power’s Anil Sardana, globally the pace of adoption of EVs is just taking off. In a similar manner, EV adoption in India will be driven by two major factors – policy direction and economic benefits in terms of TCO for EVs compared to ICE vehicles. Sardana says he foresees a faster pace of adoption in the two- and three-wheeler, bus and fleet taxi segments.

An optimistic Delta Electronics India’s Dalip Sharma says that with the government committed to e-mobility with its initial order of 10,000 EVs (via EESL), a further boost will be seen when basic issues are addressed and in turn drive double-digit growth for the segment by 2020. He says, “Cost of the EVs and batteries is one of the most prohibitive factors, followed by charging infrastructure. Once the two challenges are addressed, electric vehicle adoption will take off in India.”

Meanwhile, Exicom Power Solutions’ Anant Nahata believes that with the government’s EV drive, he “sees a lot of progress in the EV industry and foresees good growth in the coming years as well.”

Lack of a common standard
Another obstacle for speedier adoption of EVs globally has been the absence of a common charging standard that not only facilitates deployment of charging infrastructure but also helps consumers benefit from the charging network. India, which is yet to formalise a defined charging standard, is said to be working closely with industry to come out with a sustainable approach. The three EV charging firms covered here believe that once the new standard is implemented, EV adoption should see a smart uptick.

On the investment front, Tata Motors and Exicom did not reveal the level of investment already done but said they would continue to invest in new technologies, R&D, and in expanding their network. Delta Electronics says it plans to invest around $500 million (Rs 3,158 crore) over the next 10 years across segments, including EV charging solutions.

Scouting for partners
The demand for any service or product determines its supply. As the demand for EVs in India is still in a nascent stage, these three EV charging station firms are working on partnering with various stakeholders. Tata Power's Sardana says, “We are looking at setting up charging stations at various locations in Mumbai and other potential markets, and are in discussions with various stakeholders." 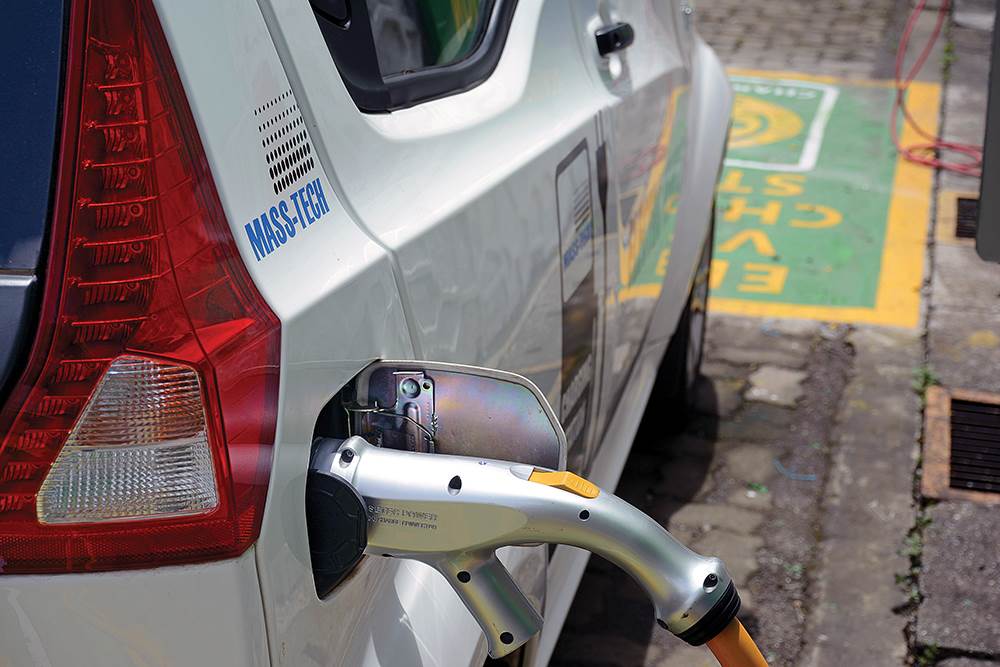 In FY2018, an estimated  60,000 electric two- and four-wheelers were sold in India, compared to around 25 million conventional vehicles.

For Delta Electronics India's Sharma, the key objective in India is to partner with the government for driving the vision of an all-EV nation at the earliest. It is also currently working on two projects including one with a public sector company and another with a European EV charging-infra company to ship around 50 charging units by end-March 2018.

Exicom Power Solutions' Nahata says, talks with both Central and State governments are underway. He claims to have partnered with auto OEMs for charging stations, apart from being the winning bidder for the first tender of supplying 125 chargers in Delhi NCR (AC and DC), to Energy Efficiency Services (EESL).

As in any business, the first entrants get to shape the market. Tata Power says it will work on building a network, along with working with its partners and stakeholders for developing future opportunities.

Exicom, which claims to be one of the leading suppliers to the telecom industry for its DC chargers and lithium-ion batteries for stationary applications, is banking on its R&D capabilities to continuously deliver innovative and reliable products, along with its wide service network.

On the other hand, Delta Electronics, which does not directly set up EV charging stations but works on supplying the technology to charging infra companies, says it works directly with OEMs, PSUs and EV infra companies. It is a leader in Europe, America and China in the segment and will leverage this learning to establish its reach in India. Furthermore, it is leveraging its global R&D to develop India-specific solutions. 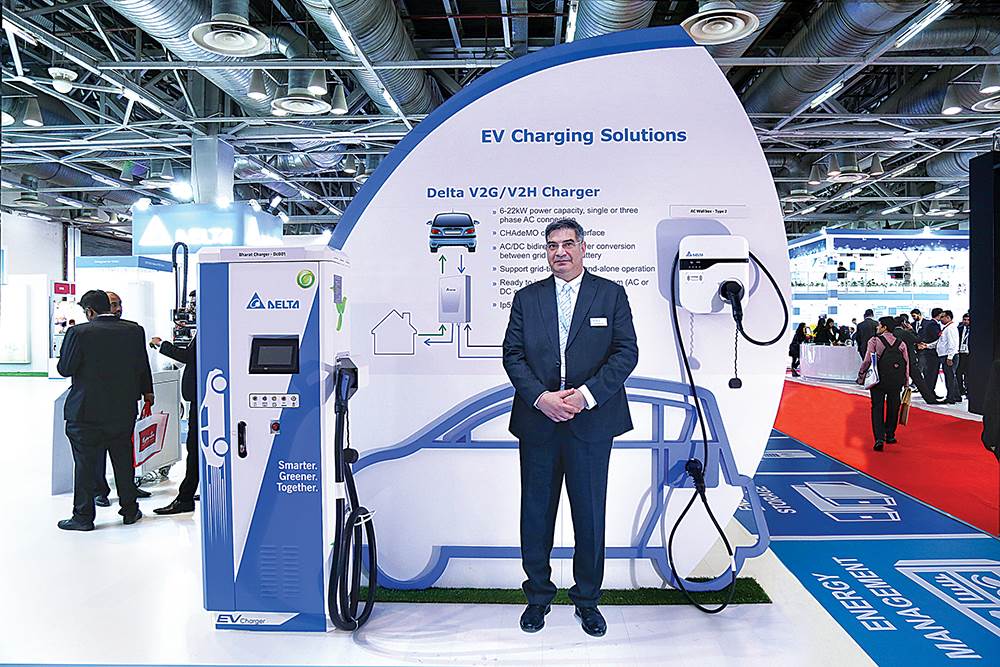 Delta Electronics India's Dalip Sharma: "We are already in talks with some private players to form a consortium to drive EV adoption in India."

Globally, OEMs, Tier 1 suppliers and ancillary units have started joining forces to tackle the disruptive evolution facing the industry. India, home to the world’s largest component industry, is also seeing a wave of partnerships and JVs to ride the wave of e-mobility.

Tata Power’s Sardana has confirmed the company is in talks with multiple players in the EV charging segment and sees potential for a feasible business model to evolve.

Delta Electronics India’s Sharma says, “We work with all the players who have the need for EV infrastructure; without a consortium, it would not be possible for the government’s vision to be alive. We are already in conversation with some private players in the segment to form a consortium to drive the adoption of EVs in India. We expect the EV business to contribute around 5 percent (Rs 185 crore) in our overall revenue by 2023.”

Exicom’s Nahata says that as the e-mobility market expands, it would look forward to bring new products and solutions for the Indian market, for which the company is open to new or disruptive ideas, partnership for the mutual benefit of both the partners.

With the Indian market being one of the world’s most cost-sensitive markets, mass-scale adoption of EVs is some time away. According to the three majors, the cost of a charging station can vary between Rs 100,000 to Rs 20 lakh, depending on various factors – real estate cost, type of charger, backend power and electricity supply cost – all of which play a big role in influencing the final cost of setting up the EV charging unit. 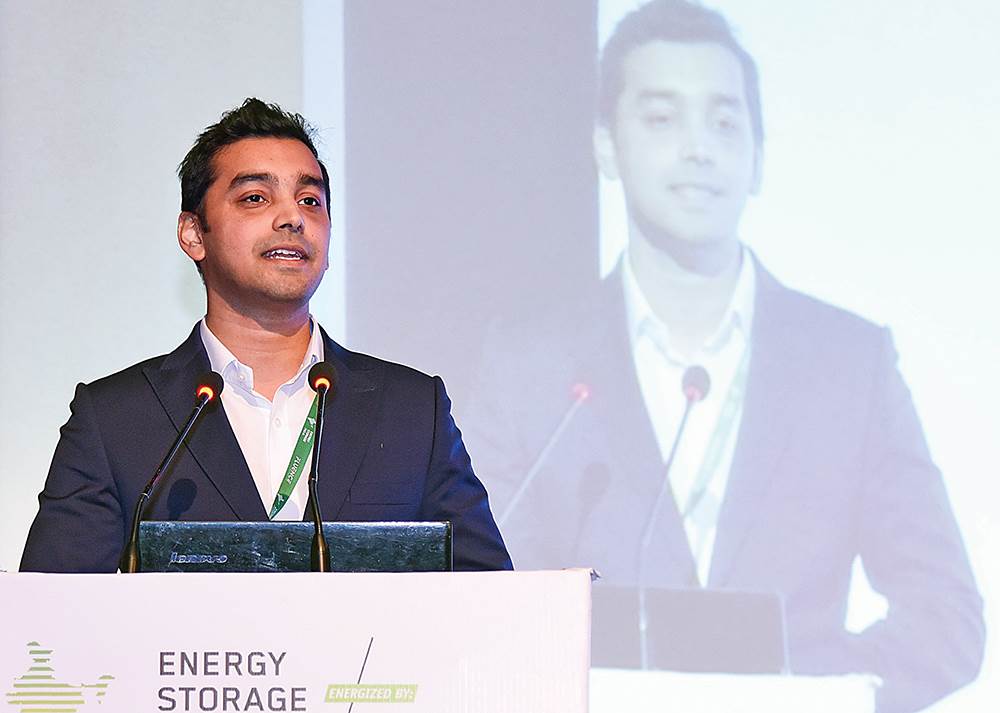 Exicom Power Solutions' Anant Nahata: "India should adopt one of the existing standards (with modifications) for more than 100V vehicles so that the deployment of charging infrastructure is not delayed due to delay in readying new standards, which would be re-inventing the wheel."

In such a scenario, Tata Power’s Sardana says, “OMCs with their inherent access to key locations across the country have an important role to play in creating EV charging infrastructure. This is also recognised by policymakers who, through various EV policies, have already clarified that petrol stations will be actively considered for setting up charging stations.” He adds that the company will explore collaborative opportunities, given the huge scale of opportunity.

Exicom’s Nahata believes that for the major oil marketing companies which have been in the fuel retail business for decades, EV charging will undoubtedly become an important part of their business in future. In fact, it will give Exicom an opportunity to work with OMCs.

Delta’s Sharma is confident that its investment in R&D will help the company to be competitive, not just with the OMCs but with other competitors in the EV charging station business. 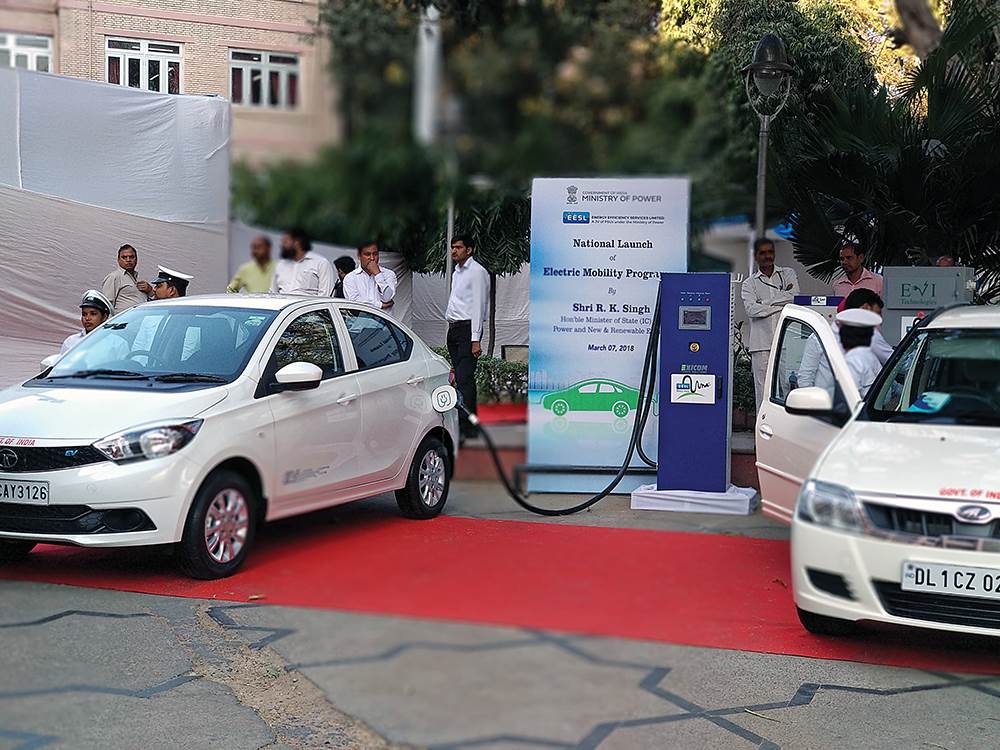 The cost of a charging station can vary between Rs 100,000 to Rs 20 lakh, depending on real estate cost, type of charger, backend power and electricity supply cost.

Tata Power believes that the government is working towards both creating market demand as well as building awareness around e-vehicles, and the company has designed a robust outreach program, which incorporates both a marketing as well as a  communications strategy, to build awareness around the need to adopt EVs.

Delta says that with the government’s push, millennials or the Gen-Ys on back of their social choices, will drive the EV adoption momentum and it will work on launching faster and more convenient solutions that address EV infrastructure-related challenges that the industry and consumers face at present. Sharma believes that companies will also need to look at technologies which can enable full charge in 10-15 minutes. This would include innovation in the battery and in the charging infrastructure, along with also the need to bolster the grid for handling the load that mass-scale EV charging would place on it.