Electric bike that thinks it's petrol-powered

The electric bike, Emula is said to recreate the exact engine, exhaust and mechanical sounds that a regular motorcycle would produce. 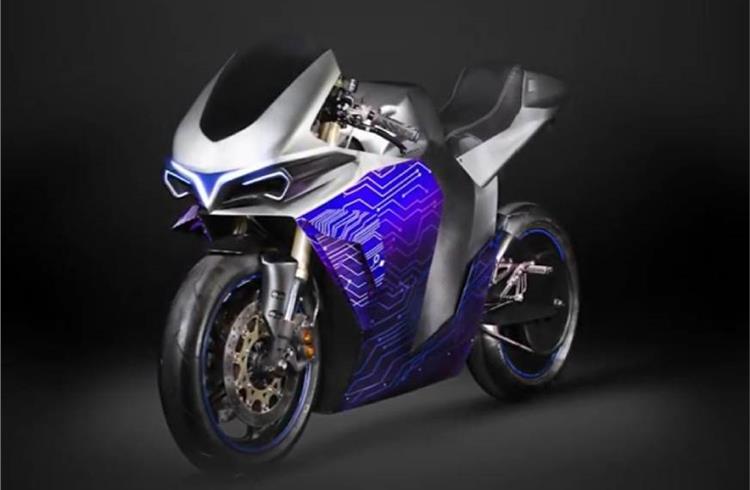 Electric vehicles have no sound, no vibration and no feedback, and as a result, almost no emotion. There's just the whine of an electric motor and the accompanying wind noise. And let's be honest, with the steady proliferation of electric motorcycles, most of us will miss the pure joy of the sounds and sensations that an internal combustion engine (ICE) motorcycle produce. Feel the sense of nostalgia creeping in already?

However, we're still at very early days and the beauty with EVs is that the possibilities are almost limitless. The Italian motorcycle you're reading about here is something that works hard to keep the special emotions of motorcycling intact, and perhaps even elevate it. Its party trick is the capability of emulating the sound and feel of a petrol-powered motorcycle, and not just one or two of these aspects. It's called the Emula.

The Emula is the brainchild of 2electron, an electric motorcycle manufacturer, based in Naples, Italy. The concept electric motorcycle debuted at EICMA 2019 and grabbed attention for its promise of being able to emulate the sounds of a regular, combustion-engined motorcycle. Which is why it is aptly called the Emula.

The Emula's concept is pretty simple. Using 2electron's proprietary McFly (a name most likely taken from the Back to Future series of movies) technology, the Emula can recreate the sound of different types of motorcycles. Some of the preset effects include a 1989 250cc, two-stroke twin; a 1999, 600cc, four-stroke inline-four; and a 2004, 800cc, four-stroke twin. While the promotional video only showcases these three effects, we expect the company to incorporate the sound and characteristics of a lot more motorcycles in the future. After all, with the hardware in place, it's just a matter of creating the software.

The McFly system plays the sounds through speakers located behind the fairing (for the engine notes) and in the rear cowl (for the exhaust notes). There's a sub-woofer under the faux fuel tank, for added effect. Together, these speakers claim to produce the exact engine, exhaust and mechanical sounds that a regular motorcycle would produce. The Revolt RV 400 does a similar trick, but for the McFly system to be taken seriously, it'll have to perform a lot better than the Revolt.

However, that's not all. The company has also installed a virtual clutch and gear simulator, actuated by using a physical clutch and gear lever. It's replete with the satisfying click as you engage another gear. In a video Emula, revealed of the prototype on the test bench, it certainly appears to sound and feel like an ICE motorcycle, accompanied by a slight jerk as the rider bangs up or down the virtual gearbox. The system can also create mild vibrations in the handlebar, footpegs and seat, taking the experience as close to the real deal.

All these features are controlled via an 8.0-inch, touchscreen display/instrument panel. The Emula also has Wifi and Bluetooth connectivity, which enables the rider to listen to the sounds using a Bluetooth helmet.

While that was all about the virtual aspects of the Emula, in reality, it is a proper electric motorcycle.

The design is quite sporty and so is the riding position, with low-set clip-ons and rear-set footpegs.

There is no information about the chassis, except the adjustable USD fork and monoshock that's visible in the images and the promotional video.

The bike is powered by an 'MK1' prototype electric motor that is said to produce 250Nm of peak torque. That's a huge number, which means this will be a very high performance machine. Power is sent to the rear wheel though a direct, single-speed transmission, because let's face it, with this much torque, it really doesn't need real gears. There is no information about battery capacity or charging times, both of which are expected to be revealed at a later stage.

Will the Emula Concept make it to production?

Well, that's an answer that only time will tell. It's one thing to create a concept, and a whole other to produce and retail it. As a concept, the Emula is intriguing as it promises to address many of the issues we have with EVs. The future of the world is growing more and more digital. If the motorcycles of the future cannot create the analogue feelings motorcyclists love, then a digital recreation would be the next best thing. The Emula currently looks to be leading the charge in this regard.