Two years after driving into the Indian market, Daimler India Commercial Vehicles has built an aftersales service network that is ready to cater seamlessly to current and future customers. Kiran Bajad reports. Two years after driving into the Indian market, Daimler India Commercial Vehicles has built an aftersales service network that is ready to cater seamlessly to current and future customers.
Kiran Bajad reports.

Daimler India Commercial Vehicles (DICV), the 100 percent subsidiary of Daimler AG, drove into India’s truck market with the BharatBenz brand two years ago. Moving forward, the German truck maker is trying to put in place a reliable and efficient aftersales network. With over 12,000 BharatBenz trucks now on Indian roads, DICV believes that it has the critical mass to both strengthen its sales network and set the bar high as well.

Given the country’s size and its network of roads of varying quality, establishing an extensive network and service back-up is a colossal task. Nevertheless, DICV is carefully equipping itself to address the challenge through a structured plan that involves quality infrastructure and trained manpower.

As part of the strategy, over the past two years, DICV has introduced its products in select applications alone. Fuel efficiency being the biggest differentiator, the company wanted the customer to realise the full benefit and has introduced haulage trucks for longer distances. Targeting institutional customers, the first truck was given to customers in 2012 before even the start of full production.

Speaking to Autocar Professional, R Ramesh, vice-president, head (aftersales and export), DICV, shares details on how his team is working to address these challenges. “Aftersales for me is not really sales but it comes much before than the actual sale happens. In India, truck usage is different as loads are not fixed and this presents a variety of challenges. While one cannot design a vehicle for every application, we can do certain things to reduce the efforts later.” 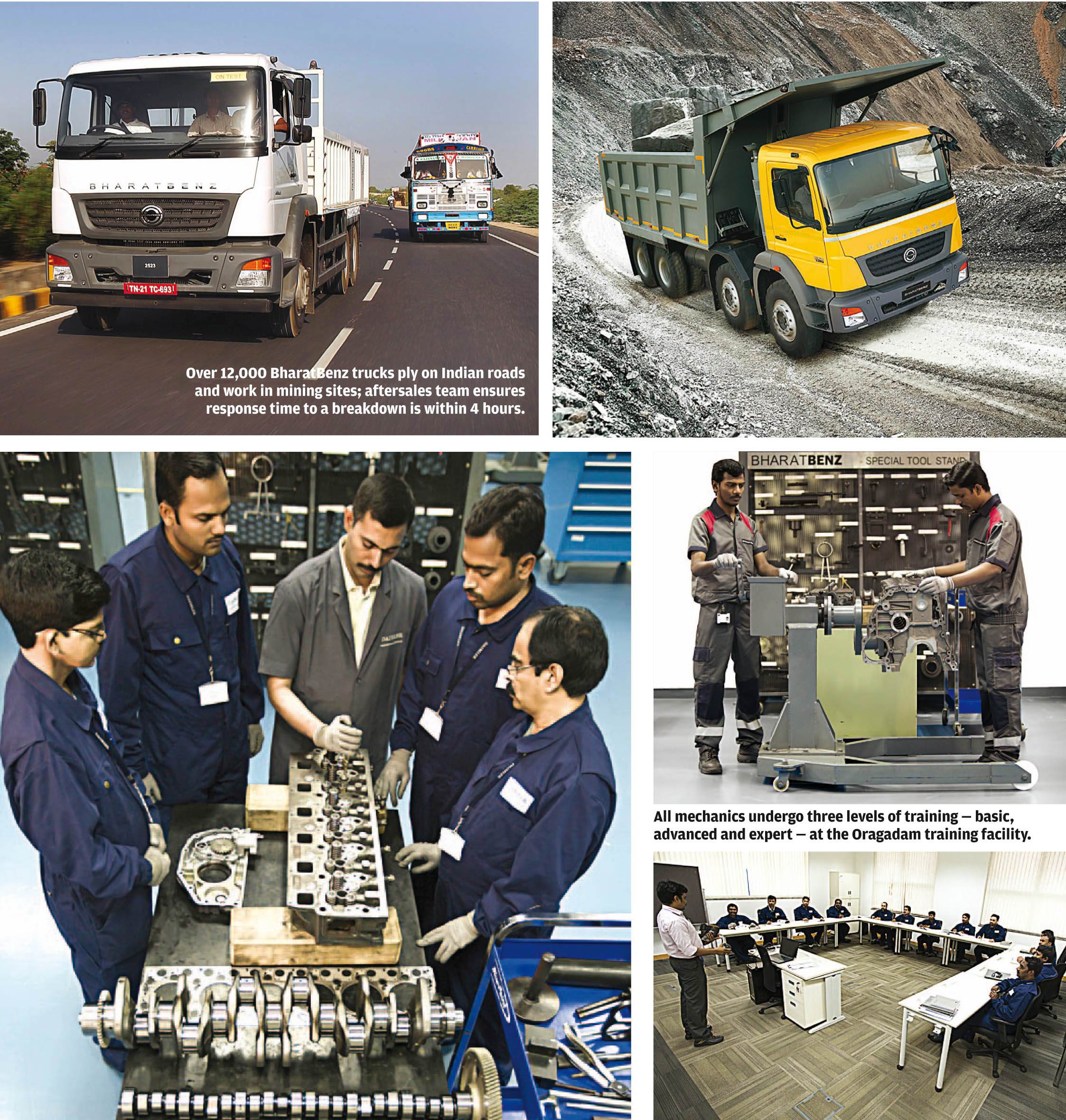 To offer faster turnaround time, DICV for the first time has set up a branded aftersales organisation called Proserv, which is designed to help customers save time, money and resources. Banking on strong aggregates and globally proven engines, the company has extended the maintenance interval of BharatBenz trucks to 50,000km and its multiples resulting in fewer visits to the workshop and increasing uptime of the vehicle.

Moreover, the focus is on to ensure that aggregates such as engines, gearboxes and transmissions don’t need any overhaul for the first 4 to 5 years. This translates into 90 percent of vehicles passing 600,000km and thus gives more resale value to customers. Ramesh says, “We are confident about this because this is proven in test and track with customers having completed 300,000km without any issue.”

Moreover, to reduce downtime and make the vehicle easy to repair with minimal costs and parts availability, the company has set a certain timeframe for repairs as well as developed special tools and equipment to handle trucks. To make the truck sales experience a seamless one and guarantee high-quality service, DICV has 73 dealerships functioning with sales, service and parts that cover 85 percent of the market. It has six 2S points equipped with service and parts. Every BharatBenz dealership has been given the company’s architectural build and layout as well as identical workflow patterns. This standardisation means that customers feel at home whenever they enter a dealership anywhere.

DICV’s dealers are classified in three categories depending upon the number of service bays and vehicle population. Ramesh says the company has been able to ramp up dealers in record time, given that the first dealer was operational in end-2011. Every dealer is equipped with a mobile service van, service bays to handle accident repairs, and express service bays. Dealers are also equipped with the Dealer Management System software that connects them with other outlets and helps coordinate the sourcing of spares.

On the staffing front, all mechanics have to undergo three levels of training classified as basic, advanced and expert. So far, 1,700 mechanics have been trained for medium and heavy duty trucks at the Oragadam training facility. Every dealership has an online technical information platform called Aftersales Central (ASCENT) which is a touch-enabled, animated, multi-lingual single interface system that provides information on all aggregates used in BharatBenz trucks. The advanced diagnostics system not helps advance diagnosis of a problem but also gives information on problems that may arise in the future.

“We have a mobile service workshop which involves an investment of Rs 25 lakh including the vehicle price. Each dealership is equipped with genuine parts, lubes, float aggregates and tools that can handle most breakdowns. These workshops are connected with customer support via GPS so that customers can be reached in four hours,” says Ramesh. These 24x7 call centres provide services in eight regional languages.

On the operations front, DICV has 27-30 dealers in all, handling 100 dealership locations with every dealer managing 3-4 locations. This helps the dealer in two ways: to get a bigger territory with more numbers to sell, and the service business helps him achieve breakeven faster.

Addressing a breakdown and getting the truck back on the road is the most important requirement for an OEM so that the operator does not lose business. To ensure this can be done efficiently, DICV has mapped the entire country in terms of highways and set up dealerships and service network in such a manner that no location is farther than 250km from one another and the response time to any breakdown is possible within four hours.

With a mobile workshop and tracking, DICV claims its record has gone up to 77 percent as against 60-65 percent for the industry in terms of putting a vehicle back on road within 24 hours of a problem being reported. The target is to take this to 85 percent.

DICV has also achieved an 84 percent record when it comes to putting vehicles back on the road within four hours and has handled 100-150 cases in two years. “We track every vehicle seriously and know every single part moved. A report reaches me every single day,” says Ramesh.

As regards accident repair and insurance claims, DICV says it has reduced downtime significantly – up to 22 days as against the industry norm of 35-42 days. The BharatBenz insurance package for its trucks comes with cashless facility, zero depreciation and towing facility.

The company also tracks individual cases with insurance companies in order to get claims approved and settled faster. According to Ramesh, in May 2014, DICV got 37 percent repeat sales and this, he says, underscores the increasing confidence of customers in BharatBenz trucks. It can be argued that DICV can offer effective aftersales service due to relatively lower vehicle numbers on Indian roads but will this advantage last as the numbers go up? Ramesh says economies of scale bring in two challenges: firstly, the overall vehicle numbers and availability of spares and parts. He seems confident of dealing with this, given that his team has already been handling parts and servicing business for Mercedes-Benz Actros trucks since 2010. Nearly 1,500 of these heavy-duty trucks operate in tough and demanding conditions in deep-mining areas where providing service and maintenance is a challenging affair. DICV says it has been able to do this successfully and operators have been able to utilise their fleet to the maximum.

So far, DICV has launched 14 models that involve 7,500 part numbers; with 8-10 model additions, this figure could go up to 12,500. Ramesh is confident that he can handle scalability largely because of the experience of handling Actros operations as well as learnings on the field. He is confident the company can handle increased truck volumes and will ramp up service accordingly. His confidence stems from BharatBenz trucks which are built to tackle Indian conditions and have undergone arduous testing.

Globally, Daimler AG has 27 plants and a central warehouse in Germany. For BharatBenz trucks, the central parts logistics centre and warehouse are located within the Oragadam plant.

A 150-member team handles aftersales of BharatBenz trucks and Mercedes buses in India. It  also handles the export of Fuso-branded trucks. “We import parts for Mercedes buses and trucks and source parts from 240 local suppliers. The team sends parts to 73 locations and another 40 mining locations in addition to exports to various countries. Handling this complexity and diversity, volumes, scale and Actros truck operations has helped us understand consumption patterns and understand inventories,” says Ramesh. Clearly, DICV’s aftermarket operation smells like team spirit.