Big can also be clean. That’s what commercial vehicle majors tried to convey with their varied exhibits, many of them employing green and alternate fuel technologies. 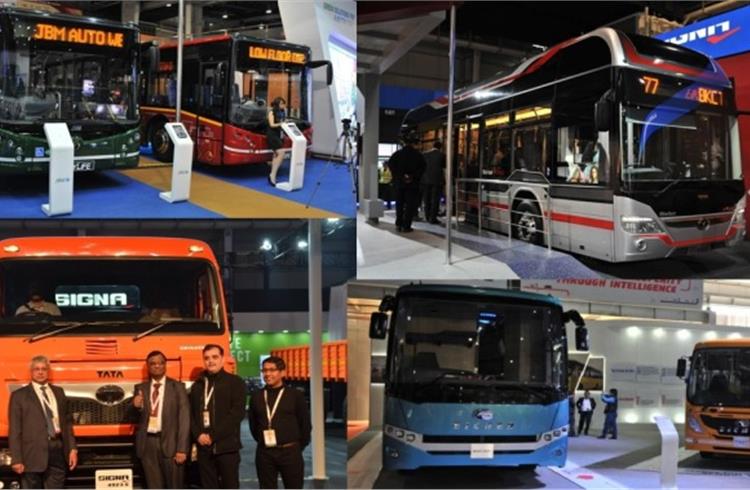 As India has decided to leapfrog to BS VI emission norms by 2020, vehicle manufacturers, particularly commercial vehicle OEMs, are already gearing up to be compliant before the regulatory changes kick in. Their green initiative was reflected in the many alternate fuel-powered products showcased at the Auto Expo. While there was no wow quotient in terms of really spectacular products, companies have tried to bring in newer and advanced technologies in their offerings.

Tata Motors under the theme of ‘Create, Connect and Care’ focuses on its brand value. Underlining its commitment towards greener and cleaner vehicles and displaying its technological capabilities, the company displayed its first full electric bus developed in-house, the Ultra Electric. 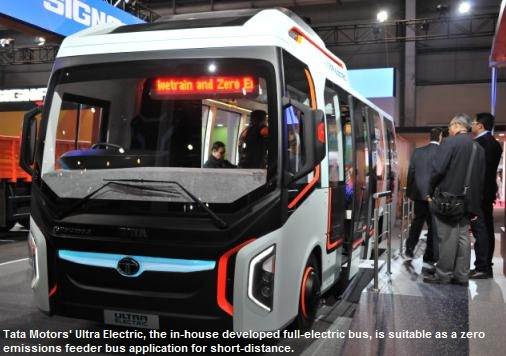 “We are able to do this because the government is providing some subsidies but for an operator to see commercial viability, a number of issues need to be addressed. We have the technological capabilities and we are showcasing them here,” said R Ramakrishnan, senior vice-president, Commercial Vehicles, Product Strategy and Planning and Customer Value Creation.

The company also revealed the Starbus Hybrid, a BS VI, commercially ready CNG hybrid bus using electric and CNG modes as fuel. On the small commercial vehicle side, there was the Magic Iris Ziva concept which is a gearless, clutchless vehicle with futuristic hydrogen fuel cell technology for zero emissions.

Another highlight was Tata Motors unveiling its all-new Signa range of M&HCVs.

The new Signa trucks will replace the existing range of mass market products and will roll out over the next 12 months. At the expo, there were three variants from the Signa range – the Signa 4923.S tractor, the Signa 3118.T multi-axle truck and the Signa 2518.K tipper. The range will extend to other segments as the company introduces more products in various configurations. 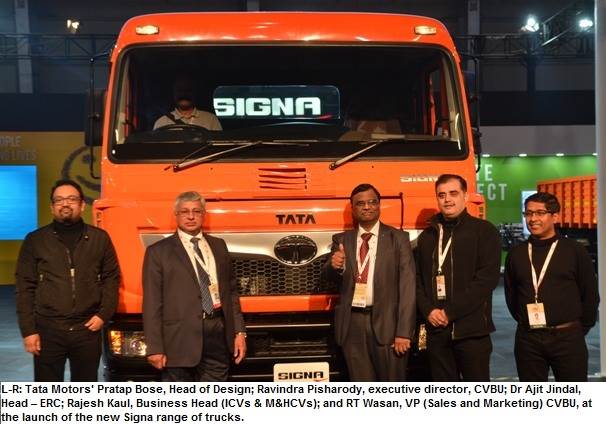 Unlike the traditional mass market products which see a cowl body in the haulage segment, Signa will have a newly designed cabin with proven Tata Motors aggregates aimed at delivering a world-class trucking experience.

Importantly, Signa also tries to address driver concerns with improved standard cabins, better ergonomics, and completely redone interiors. “We have taken all the steps to take care of the driver, both while driving as well as when he is resting,” says Ramakrishnan.

With its smartly designed cabin space, improved ergonomics and NVH levels, the Signa range of cabins is built to offer a superior in-cab experience, enabling drivers to operate fatigue-free over long hauls, which in turn offers significant improvement in productivity. With an inbuilt telematics system, by Tata Fleetman, the new Signa range empowers fleet operators with a more connected experience to better manage their transport business through optimum driver, vehicle and fuel management.

Ashok Leyland showcased its first non-plug-in hybrid bus called Hybus claimed to offer major operating cost benefits. Focused on urban transport application with start-stop cycles, ultracapacitors provide the diesel motor the necessary power for movement. “This is a completely in-house development with less than 10 percent imported content. Unlike pure electric which we displayed last year, hybrid buses are relevant for India. Hybus is safe, cost effective and offers an over 20 percent improvement in fuel technology. It is the right product for a city like Delhi,” says T Venkataraman, senior vice-president – buses, Ashok Leyland. 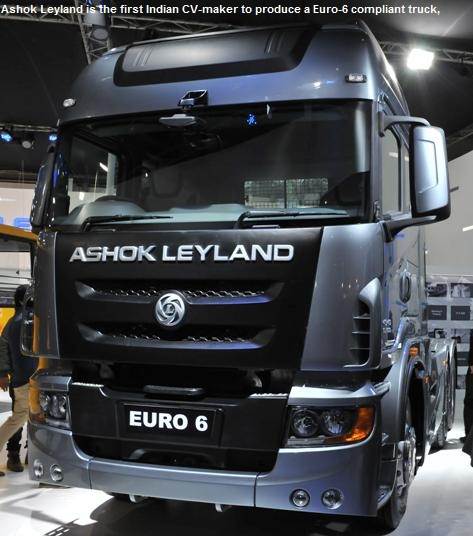 Demonstrating its commitment to the Make-In-India campaign, Ashok Leyland unveiled its first indigenously developed Euro 6-compliant truck – the 4940 – indicating it is ready for India’s imminent greener future in 2020. This is a complete in-house development carried out by the local R&D team. Euro 6 norms demand a dramatic reduction in NOx and particulate matter. Achieving these norms require high lead in technological capabilities. The company says its 4940 trucks use Indian innovation to offer world-class norms at Indian costs.

Dr N Saravanan, senior vice-president, Product Development, Ashok Leyland, while elaborating on the importance of this in-house development, says: “As an Indian CV maker, we are capable of developing next-generation technologies required to meet emission levels. This is the start of a long journey but we are on the right track as to where we want to be for Euro 6 vehicles.”

VECV GOES ON A HYBRID DRIVE

The bus is equipped with a hybrid system that combines a conventional IC engine with an electric propulsion system which helps reduce emissions and offers better fuel efficiency. “As pollution across cities is on the rise, the need of the hour is to provide cleaner vehicles. With our hybrid bus, we are offering a soft hybrid; this is the way to go in the future which offers a combined hybrid with better fuel economy,” says R Ravishankar, executive vice-president – Sales, Marketing & Aftermarket. 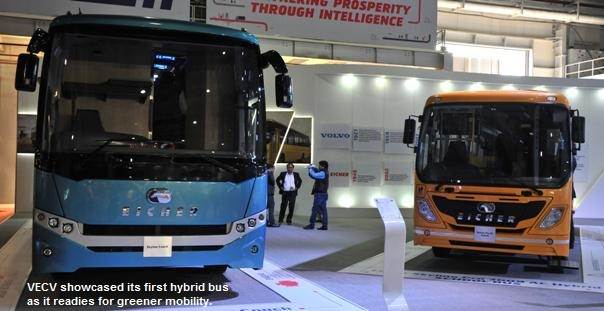 Further extending its range, VECV also ventured into the 37-tonne rigid category by introducing the Pro 6037 haulage truck. Of late, this category has seen good sales as operators actively take a good look at high-tonnage rigid vehicles. Eicher plans to commercially launch this truck later this year. The company also unveiled its smallest vehicle, the Pro 1049 LMD truck, for select applications in inter- and intra-city operations.

Yet another alternate fueled highlight of the show came from JBM Auto which unveiled its locally produced full electric bus, the Ecolife. JBM has developed this green bus in partnership with European bus manufacturer Solaris Bus & Coach SA. 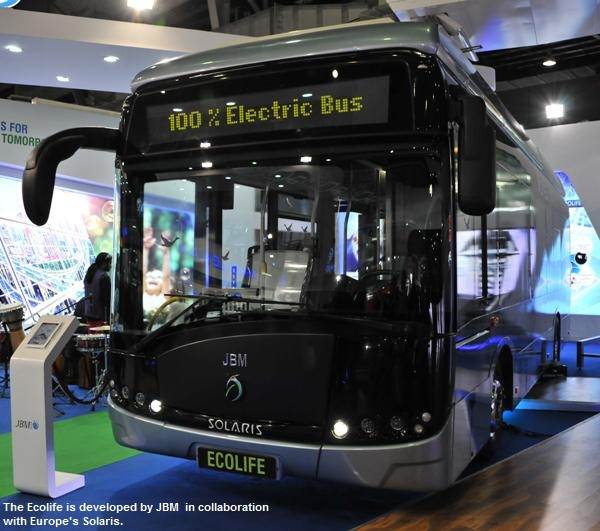 Nishant Arya, executive director, JBM Group, said, “Pollution being an increasingly serious health concern in metropolises, it has become imperative to shift our mass public transport system from fossil fuels to non-fossil fuels.  We believe that the electric bus would be an apt solution that we could offer.”

Ecolife has a corrosion-resistant monocoque structure and is a zero emission vehicle as it is powered by lithium batteries, which are fast-charged through a pantograph. The company claims it can run 150-200km in 10-15 hours of city bus operation. The bus can also run on plug-in charging. The electric bus technology is adaptable to the city bus operation depending on demographic and geographic conditions. The bus will be offered in two variants of 9 metres and 12 metres’ length.

Once in commercial production, the Ecolife will be the second indigenous mass public transport product from the JBM Group, which had introduced the Citylife at Auto Expo 2014.

Scania India Commercial Vehicles, the local arm of the Swedish truck major, displayed Citywide, the first of its kind bus in India which is powered by biofuel. The low-floor and low-entry bus is compatible with all commercially available eco-friendly biofuels and complies with Bharat Stage IV, and Euro 5 and Euro 6 emission norms.  The company is targeting municipal bodies for this bus; a company official told Autocar Professional that the bus is generating quite a bit of interest among State Transport Undertakings. 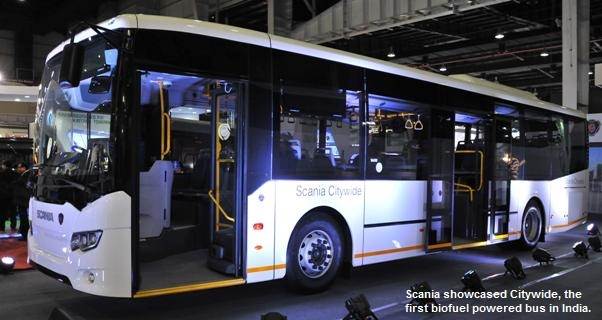 Scania Commercial Vehicles India is to remain firmly entrenched in the Indian premium truck and bus market with niche applications. The company, which is known globally for its high-powered trucks, is keen to bring in its high-end products to the Indian market and make them suitable for Indian conditions.

Speaking to Autocar Professional at the Auto Expo, Mikael Benje, managing director, Scania Commercial Vehicles India, who recently took over the India operations, said: “We are not looking for the mass market in India. Scania globally cater to the premium segments and we will continue to do the same here. India is a challenging and cost-conscious market but we are making efforts to provide the right products for the right applications.”

According to Benje, Scania’s Metrolink buses are gaining ground in the Indian premium bus segment. Along with private operators, a number of State Transport Undertakings (STUs) are buying these buses. At present, around 280 Metrolink buses ply on Indian roads. Following their introduction in the southern and western regions of the country, the company will launch them in phases in the north and east.