The French brand is not quite famous in India, but there’s a customer base of old Citroen models here which the brand wants to tap on for a successful Indian foray. 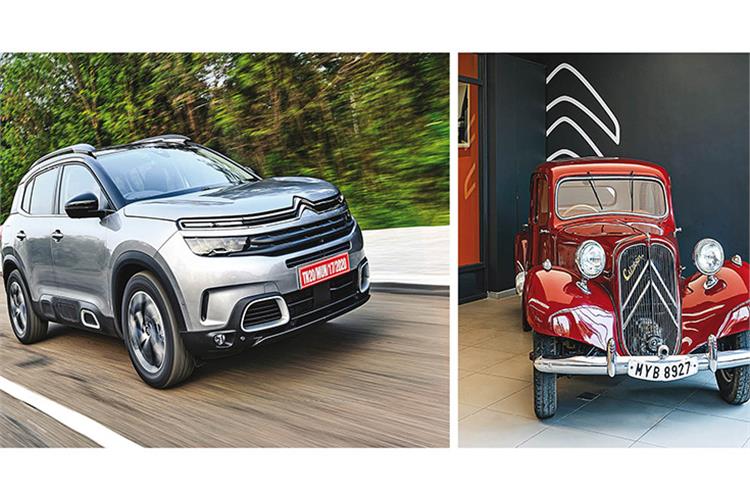 André Citroen, French industrialist, and founder of carmaker Citroen is believed to have said that he would like ‘Citroen’ to be the third word that every child in France speaks (after mama, papa). Not quite sure if that happened but Citroen has established itself as a household name in France. In India, the latest market that the now-global brand enters this month, it is far from being a familiar name.

However, there is a population of Citroen models in certain parts of India, which the French brand wants to tap to build the bridge for a successful drive in India. The brand’s first model in India, the C5 Aircross SUV, is scheduled for launch on April 7. “We’ll have a vintage heritage Citroen in every dealership. It’s part of the new brand launch,” Saurabh Vatsa, chief of Citroen India’s marketing operations, tells Autocar Professional.

According to Vatsa, in the past one year “a lot of people” have reached out to the company to inform that they have a Citroen. Some of these have been inherited from earlier generations. “So, suddenly, they are pulling out all their Citroens from wherever they were, because till now, in terms of value, Citroen was pretty low because the brand wasn’t there in the country,” he says. While the 2CV is the most popular among vintage Citroens, the company was also surprised to find a Type H vintage van in India. The owner of a Traction Avant, a premium Citroen sedan in its time, also came forward to let Citroen India know about his prized possession. Apparently, the proud owner has also bought a 2CV recently and it is undergoing restoration in Kerala. Vatsa says there’s also a private museum in Coimbatore with 6-7 Citroens in it. Some of the customers, or inheritors, of the vintage Citroens have offered to give their cars for display in Citroen India’s showrooms.

Tapping history to connect with the present, Citroen’s flagship model, the C5 Aircross SUV will build the road for the future. Expected to sport an entry price tag of around Rs 30 lakh, the 4.5-metre-long SUV is powered by a 2.0-litre diesel engine offering 177 PS of power, and 400 Nm of torque. The 8-speed automatic gearbox adds to the SUV’s comfort pitch. The furniture-inspired seats are designed to add an extra comfort. Given the vehicle’s size, it’s quite easy to drive in city traffic too, with the light steering providing support. The C5 Aircross will compete in the premium SUV segment against the likes of Hyundai Tucson, Volkswagen Tiguan Allspace. It is imported through the CKD route and assembled in the 50,000 units capacity Thiruvallur plant of the CK Birla-PSA Group (now Stellantis) joint venture. The engine is also locally assembled.

Focus on sustainable, scalable business model
While gaining acceptance in the Indian market is key for Citroen, it says it is in no hurry to gain market share. The most important job now for the leadership team is to build the brand, through its products and dealership experience. “It’s not important to only strike a deal. It has to be sustainable, scalabale,” Eric Apode, senior VP, PCA Motors, the JV entity, tells Autocar Professional.

He stresses that it’s “very important” to grow gradually, “like farming”. That maybe so, but Apode, along with his colleagues, is quite busy preparing the line of products that will follow the C5 Aircross. In Citroen’s top-down approach for the India, the models that will follow the OEM’s flagship SUV will be the ones that will get the volumes.

Based on the C-Cube platform that’s currently under development in India, one of them is expected to be a sub-4 metre SUV. “There will be different models, different shapes. Some of them could be SUVs. What we refuse to do in India is to say, ‘all the Citroens are SUVs’ because this is not our legacy,” says Apode.

Legacy and DNA are factors that Citroen is quite sensitive about. Apode says, “The next generation of Citroen which will be created here needs to be true and consistent with the C5 Aircross, with the history of the brand, with the 2CV. You cannot say one value today, another value tomorrow. It never works.” The brand DNA, which the engineers working on the C-Cube platform are also being sensitised about are ‘comfort’, ‘peace of mind’, ‘easy to use’.  However, what may not be common is the technology, as different segments may have different cost-value equations.  in different segments. Apode adds that technology will also be offered only to offer value. “We are not doing technology for the image or for being proud of the technology. No, we are doing technology for the well being of the customer, always,” he says. With these principles, Citroen plans to offer one new model a year in India.

Though Citroen will not divulge the details, what it is clear about is that the A segment is not in its radar unlike fellow French peer Renault. The plan is to play where the “heart of the market” is in India — the B-segment. With the
launch announcement, Citroen connected with the hearts of owners of its vintage models. The job of the new-generation Citroens, starting with the C5 Aircross, will now be to start a new, long-standing love affair with the Indian customer.

This feature was first published in Autocar Professional's April 1, 2021 issue.