China has now reached a point where it has to transform itself to be a global powerhouse. Sumantra B Barooah finds out how industry leaders are planning to grow further and tap global business opportunities. 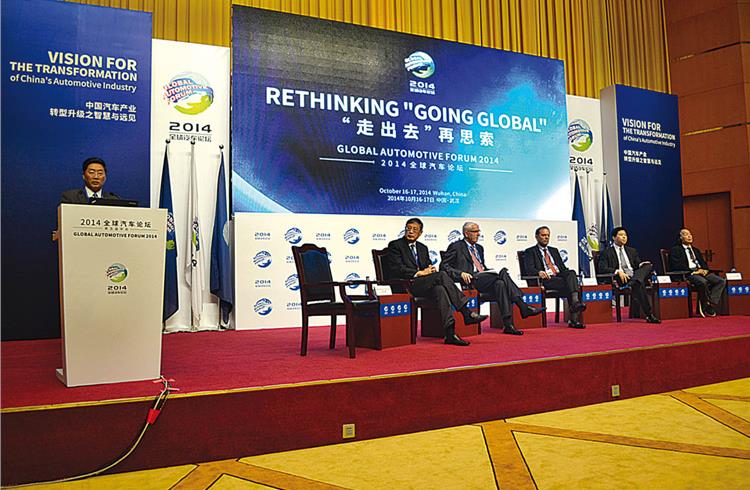 China has topped the global automotive sales charts five years in a row now. Industry players are happy with China’s status as the world’s largest market and producer of cars. But they, especially the local companies, are also a worried lot. Looming environment concerns, a fall in market share of local brands, and the lack of strong local technology capabilities to grow globally are some factors that
worry them.

On the first day of the two-day fifth Annual Global Automotive Forum (GAF) in Wuhan, China on the theme of ‘The Transformation of China’s Automotive Industry’ held in October, the backdrop for the discussion was the global economic environment and the ever-changing challenges in the automotive industry worldwide.

The forum provides a platform for industry leaders, experts, financiers, analysts and media to exchange their opinions and share their knowledge to better anticipate the development of China’s automotive industry.

As a key industry in China, the current output value of the automotive industry contributes 6 trillion yuan (Rs 6,018,000 crore) each year to the Chinese economy, the production and sales volume ranked first among the world. China accounts for about a quarter of the world’s automotive market, making it a veritable automobile manufacturing and selling power.

Making the opening remarks, Wang Ruixiang, chairman of China Machinery Industry Federation, said transforming the focus from volume production to quality production is critical. He said, “China’s automotive industry has entered into a critical period where it is facing comprehensive transformation and upgrading from a focus on producing volume to producing quality.” China should avoid blind acceleration and a GDP ranking-oriented target and should consider structural adjustments which can be achieved by accelerating mergers and acquisitions and increasing innovation.

Meanwhile, Wang Xia, chairman of the China Council for the Promotion of International Trade (CCPIT), Automotive Committee, China, felt the only way forward for the conventional automotive industry is a comprehensive transformation. “There is a huge contrast between the Chinese automotive market volume and the relatively weak position of the Chinese brand and technology,” he said.

Product positioning and pricing of Chinese brands versus international brands overlap on a large scale and there is now fierce competition, speedy inclusion of the Internet and mobile networking technology and large data processing technology into the passenger car industry.

Wang Xia said, “Our traditional auto industry and businesses have to make tough choices, and comprehensive transformation is the only way forward. At last year’s forum, we reached many constructive conclusions, a consensus built upon the many years of experience of the industry leaders and experts in attendance. It was agreed that during the strengthening of China’s economic re-structuring and upgrading, the transformation of China’s automobile had entered a critical period.”

Wang went on to say that: “I strongly believe in the next five to 10 years, disruptive changes in the automotive industry will go beyond our imagination.”

GLOBAL PERSPECTIVE
The Global Automotive Forum provides a highly international perspective and attracts the attention of global automotive leaders. The attendees at the opening of the forum included: Wang Ruixiang, chairman of China Machinery Industry Federation, Chen Lin , commercial counsellor, Department of Outward Investment and Economic Cooperation, Wang Xia, chairman of the Automotive Committee of the China Council for the Promotion of International Trade, Ruan Chengfa, vice-secretary of Hubei Province Party Committee and secretary of Wuhan Municipal Party Committee, Tang Liangzhi, mayor of Wuhan Municipal Government as well as around 1,000 delegates from domestic and foreign OEMs, component suppliers and other automotive industry or industry related companies.

THRUST ON NEW ENERGY, TECHNOLOGY
china’s car market is cooling down, with the growth rate of only 3 percent in September reportedly being the slowest in 19 months. But OEMs are betting on the market. That’s because car penetration of 100 cars per 1000 population in the country is still far behind the Western matured markets.

There’s scope to grow, but a good part of the new growth could be through new technologies and new energy, because even at current levels the automobile population in China is putting a pressure on energy conservation. 60 percent of the oil imported by China is used for transportation — 87 percent of petrol and 45 percent of the diesel is consumed by automobiles. In such a scenario, the Chinese government’s focus on new energy vehicles is but obvious. “It’s more urgent for China than any other country to develop new energy vehicles. There’s energy shortage here,” says Wang Chuanfu, chairman, BYD. Chuanfu also highlights the potential problem that China will face if every household owns a car. Currently, one out of four households in China owns a car.

Vehicles with various stages of electrification and autonomous vehicles top the priorities for companies in China. These will help tackle the energy issue and the high number of fatalities on Chinese roads. It is estimated that road accidents cause 100,000 deaths every year in China.

Industry experts feel that connected cars are at a 'tipping point' in China and that the country can take a lead in autonomous driving cars in a few years from now. Patrick Gardiner, president, global automotive, Nielsen, says China is a unique marketplace for the connected car. He shared survey reports that to support his statement. “42 percent of car owners in China stated they have telematics in their car and more than 50 percent Chinese consumers want smartphone connections to act as a wi-fi hotspot,” says Gardiner. Contrary to what one may think, entertainment does not feature in the top 10 reasons for connectivity.

Feng Xingya, executive deputy GM, GAC Group, says, "Convergence of internet and vehicles bring new opportunities. We are also developing autonomous vehicle technology.” He also mentioned that the GAC Group will also launch a 4WD hybrid and a full electric vehicle in the future. One of the EVs could also have a driving range of up to 600 kilometres.

From the various deliberations at the fifth Global Automotive Forum, it was clear that the automotive industry is working on a serious transition, because of which it is also “experiencing pains of restructuring”. Dae-Sung Yoon, executive MD, Korea Automobile Importers and Distributors Association, Korea, says: “Anywhere in the world we can’t live a day without a Chinese product.” He also points out that in the 60 years of the Chinese auto industry, there has been no global player or brand from the country. So, there could be a paradigm change in the coming years in the world’s largest car market and manufacturing hub. And there could be lessons here for many other countries which are emerging as strong automotive hubs. 