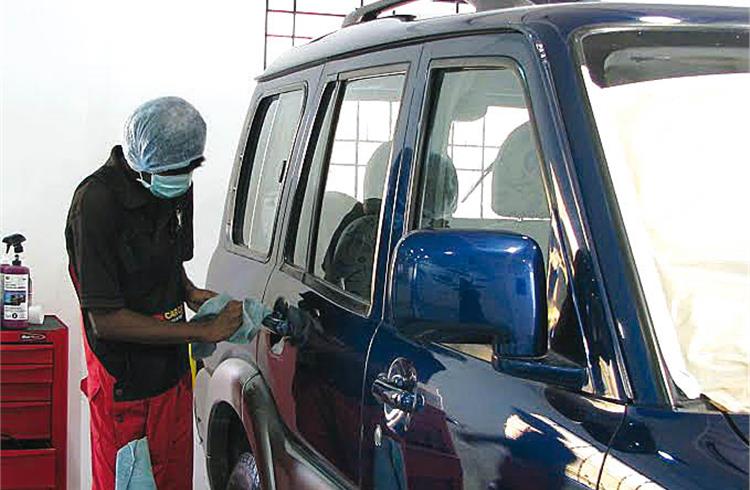 India’s car detailing space, currently growing in popularity, is set to become a lucrative business as car owners begin to take pride in the ownership of their passenger vehicles. One company that aims to leverage this potential is 3M Car Care.

Having started its car care vertical (or car detailing arm) in 2002, the company established its first standalone outlet in Bangalore in 2010. For eight years, it was known to car dealerships and service centres as a provider of car detailing products. These include polishes, cleaners, wash shampoos, rubbing compounds, dressers and many others.

Ninad Gadgil, general manager, automotive aftermarkets division, 3M India, says, “Until 2008-2009, the awareness about 3M as a brand was nearly non-existent as we operated through usual car dealerships in the organised sector.”

According to Gadgil, all major OEMs source their car care products from 3M Car Care, hence defining a wide array of customers across the country for this Bangalore-based firm. The company is an independent arm of 3M India, a subsidiary of the Minnesota-based 3M Corporation, a $ 30 billion company with operations in over 70 countries.

Car detailing covers two aspects – interior enrichment and surface refinement – for new and old cars. “At our outlets, our services for a new car (0-3 months of purchase date) include anti-corrosion treatments with multiple warranties (underbody and other areas), paint protection treatments (launched a year ago) and others for the exterior side. Interior enrichment includes programmes for germ clean treatment (also recently launched) and many others, for older cars (older than three months of purchase), surface refinement treatments and other similar services,” he elaborates.

The facilities provided at 3M’s service outlets primarily differ from an OEM-specific service centre. The focus is on appearance and hygiene (such as car AC cleaning treatments) of a car. “The profile of customers driving into our standalone outlets varies from small car owners to luxury cars. A true car enthusiast understands the worth of his vehicle and he is our target. This trend will only grow given the fact that we are working on innovative services and programmes,” adds Gadgil.

“While the business coming from the OEM-specific car service centres is bigger than the business coming from standalone outlets currently, we are absolutely bullish about this space to grow in future. The market potential can be estimated from the fact that only 10 percent of all cars at car service centres opt for car detailing jobs,” concludes Gadgil.

According to a recent market research study conducted jointly by the 3M Car Care along with AC Nielsen, 60 percent of all car owners in metropolitan and Tier 2 cities are aware of 3M’s brand name today. “We get roughly 300-400 cars at each of our outlets per month which adds to over 10,000 cars turning up at 3M Car Care outlets across all locations per month currently. Nearly 25 percent business comes from repeat customers,” he says.

Gadgil estimates the annual market size of car detailing at around Rs 375 crore.  3M Car Care claims a 50 percent share and hopes to grow by 25-30 percent year-on-year. The unorganised market is the single largest competitor for 3M Car Care in India. It is, therefore, a challenge for an organised player like 3M Car Care to break into such territory.

3M Care Care also provides similar products for two-wheelers but the numbers are small. Operating on the same format as cars, two-wheeler OEMs such as Suzuki Motorcycle India, India Yamaha Motor, Bajaj Auto and others source 3M products for dealerships and service centres. Nevertheless, none of the existing 3M’s own outlets service two-wheelers currently as the company fears the dilution of car-specific service provider’s image in the market. But Gadgil says the two-wheeler space is also set to grow in this niche area.

Setting up an independent outlet, says Gadgil, can cost between Rs 50 lakh-Rs 1 crore (including the deposit for rent depending on the location). Another substantial investment is manpower training, he adds. 3M Car Care which has 29 standalone outlets operates through a direct team of 90 people and indirect chain of 7,000-8,000 people (employed by the 3M’s franchises and OEM distributors across India). The top team comprises six product developers, four technical service engineers and seven regional technical traders.