A brief report on IRCOBI, the three-day conference organised by JP Research in Lonavala, that handles various aspects of road safety and the latest technologies used in crash investigation. 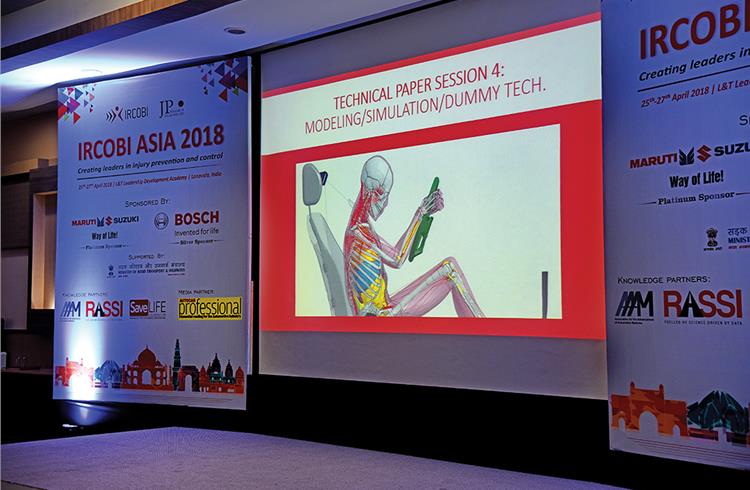 The three-day conference was attended by about 100 participants, which included a mix of students, faculties, engineers working with companies, representatives from vehicle manufacturers, component suppliers, research organisations, tyre manufacturers, insurance companies and others. The young engineers appeared passionate about the topic of road safety in India.

Giving a brief about IRCOBI and its global position, Jeya Padmanaban, president and founder, JP Research India (JPRI), said, “IRCOBI is one prestigious organisation in the field of biomechanical injury analysis. JPRI has been presenting papers at IRCOBI for many years now. They have been focused on Europe all these years and with increasing vehicle population in Asia, they now plan to study the Asian markets too. The intent of organising the IRCOBI conference in India was to educate the attendees about the concept of biomechanical injury analysis, child safety and others. There are a bunch of topics that are very important for the automotive safety engineering group.” 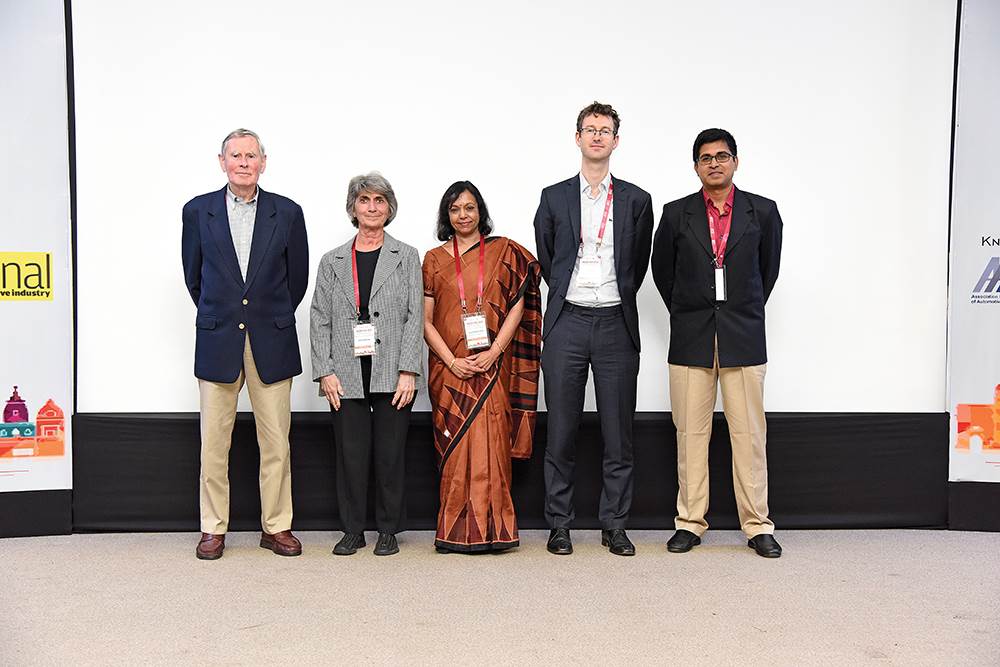 The IRCOBI council consists of road safety experts from all over the world as members and elected on their individual merits and not as representatives of specific countries, corporations, academic institutions or government bodies. Interestingly, there are only two council members elected from India – Dr Sudipto Mukherjee of IIT Delhi and Ravishankar Rajaraman of JPRI.

Later speaking to Autocar Professional, Rajaraman explained, “We looked at educating the attendees about the basics required to lay down the foundation from where the research starts. The intent was to make them understand this research and why it is important to study the real-world crashes. Computational modelling and simulation based on the data from other countries are not enough. You have to start with looking at the real crashes in your own country, in your local area, and then build up from there.” 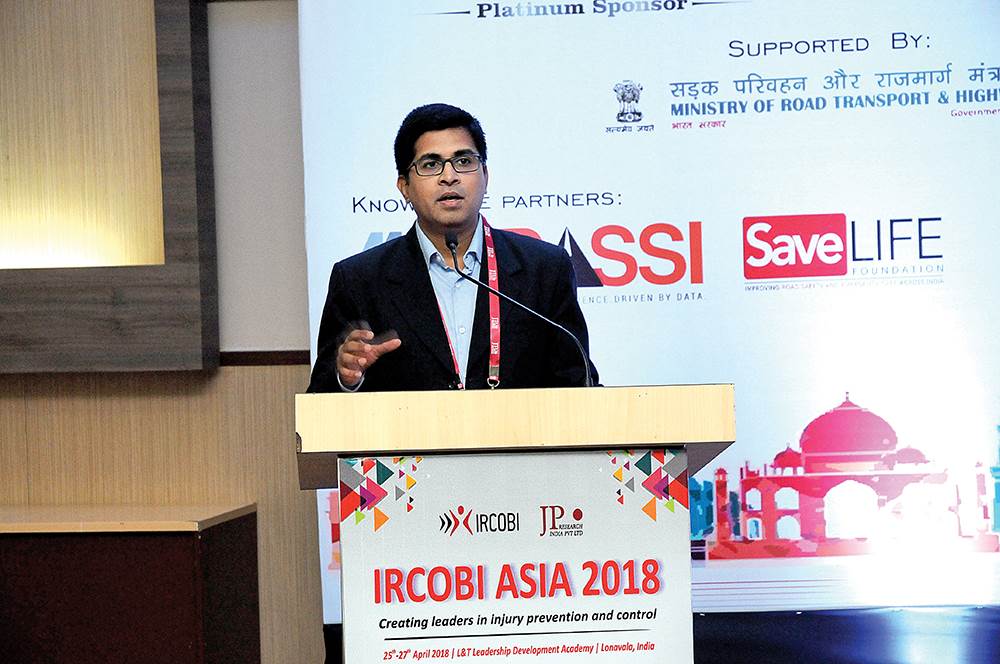 JPRI's R Rajaraman: "You have to start looking at the real crashes in your own country and build up."

The IRCOBI Asia conference, which followed themes around fundamentals of crash research, vulnerable road users and modelling, simulation and dummy technology, started off with a session on Injury Biomechanics by Dr Kai-Uwe Schmitt, secretary, IRCOBI and Dr Ciaran Simms, president, IRCOBI. The session focused on the aspects of impact forces, how much can a human body tolerate, how force is measured and other parameters involved in biomechanics. Dr Ciaran Simms: "The sheer scale of preventable road deaths in India means this is the beginning of a journey."

The day also had a workshop on AIS, called as the abbreviated injury scale, by Kathy Cookman. The AIS coding is developed by the US-based Association for the Advancement of Automotive Medicine (AAAM), a global multi-disciplinary professional organisation. AAAM is dedicated to saving lives and eliminating road traffic injuries through scientific research, educational programs, public policy recommendations, and AIS coding, training and certification. 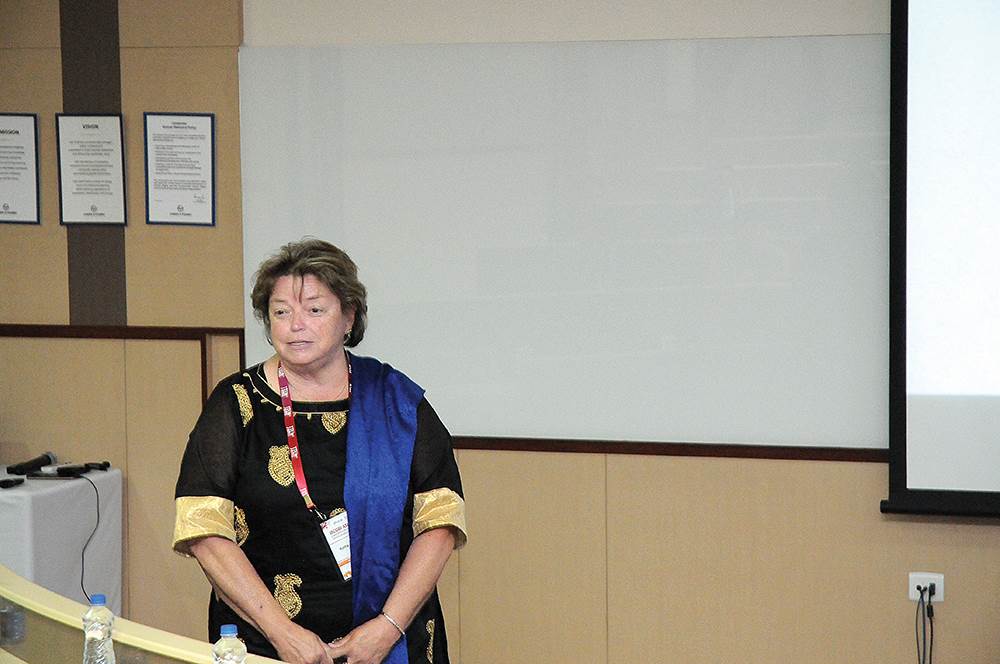 Kathy Cookman took the audience through a workshop on AIS or abbreviated injury scale.

“This was the first time that AAAM came to India to talk about the AIS coding. Automotive medicine is a domain wherein the engineers and doctors work together in the West. AAAM and IRCOBI work in tandem in different continents. The injury severity scale was developed by AAAM and is adopted worldwide,” pointed out Padmanaban, who is associated with AAAM for several years now.

“How do you look at an injury caused by a road accident to figure what kind of injury it is? Whether it is a severe head injury or a minor head injury? Such kind of courses were never offered in India. We, as part of the IRCOBI conference, offered that training to the whole bunch of people who attended for the first time,” she explained. 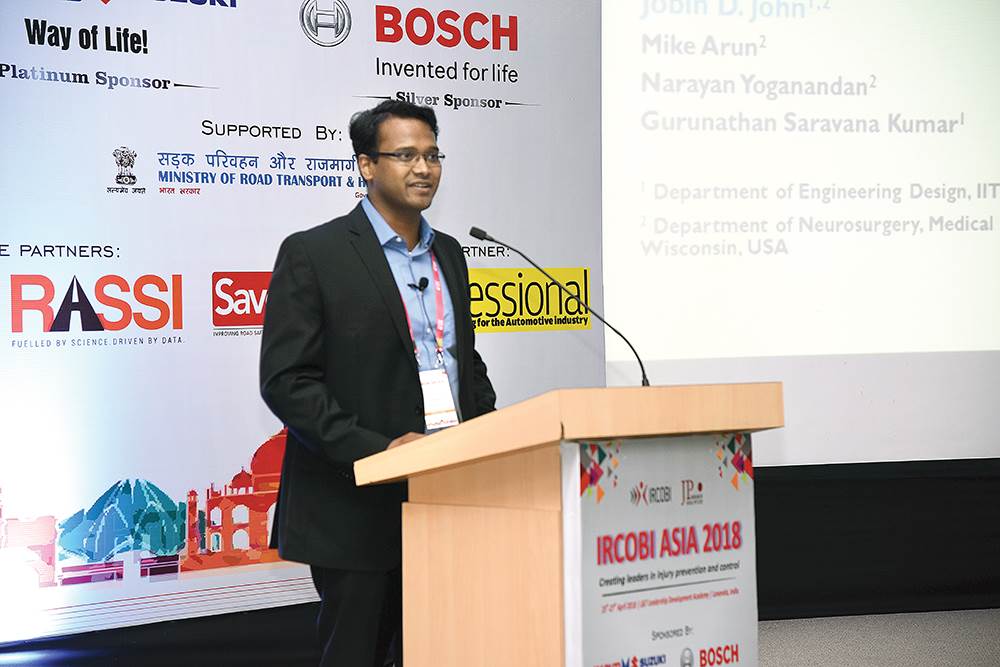 Jobin John from IIT Madras and his team won the Young Researcher Award for their tech paper on the cervical spine.

The AAAM workshop included exercises on identifying injuries using real-time Indian case studies from RASSI data. “In a way, the mechanical engineers were taught how to read medical injury reports and draw severity levels in each of the cases,” pointed out Rajaraman.

The highlights of the second day included the keynote by Professor Hermann Steffan, who is one of the founders of PC Crash software. He spoke about the latest technologies used in accident reconstruction such as laser scanning, which can scan the entire accident area and can create a digital 3D image to study the same. 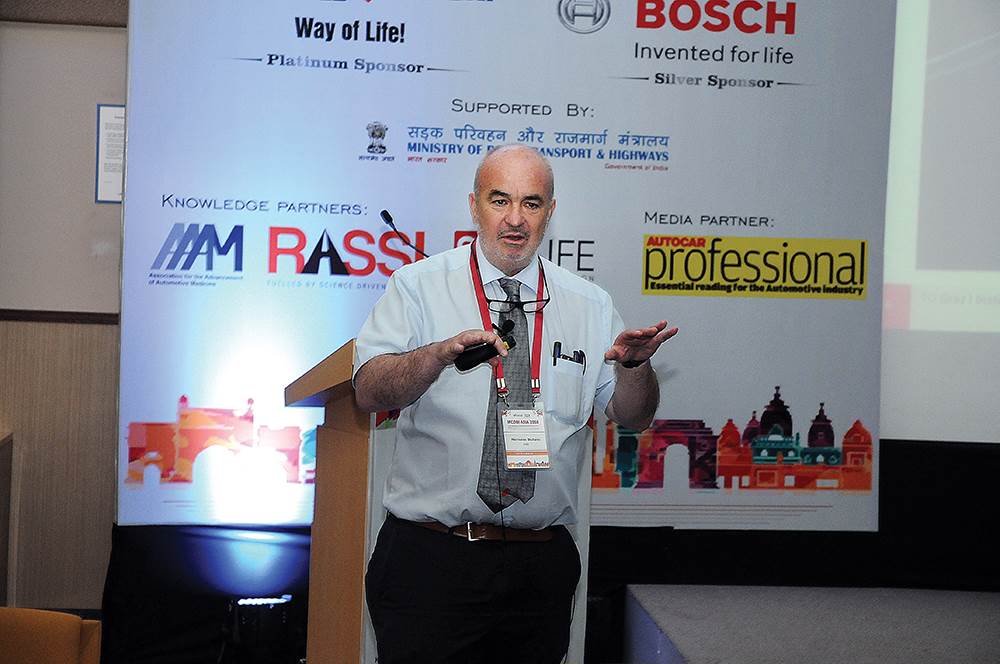 Professor Hermann Steffan spoke on the latest technologies used in accident reconstruction such as laser scanning, which can scan the entire accident area and create a digital 3D image.

A session on paediatric biomechanics and child safety was organised on day two by Dr Aditya Belwadi and Dr Farid Bendjellal. Dr Belwadi works with the Children’s Hospital of Philadelphia, which is well known for all the child safety studies. Dr Bendjellal is technical director at Britax, a global manufacturer of childcare products including child seats for passenger cars.

They spoke about Isofix car seat fittings. To facilitate the demo, Maruti Suzuki had provided two cars that had four child seats in the rear. The demo session educated the attendees about Isofix and how another Isofix child seat can be easily bolted on the rear seat. The Isofix system is now commonly found in many cars sold in India. 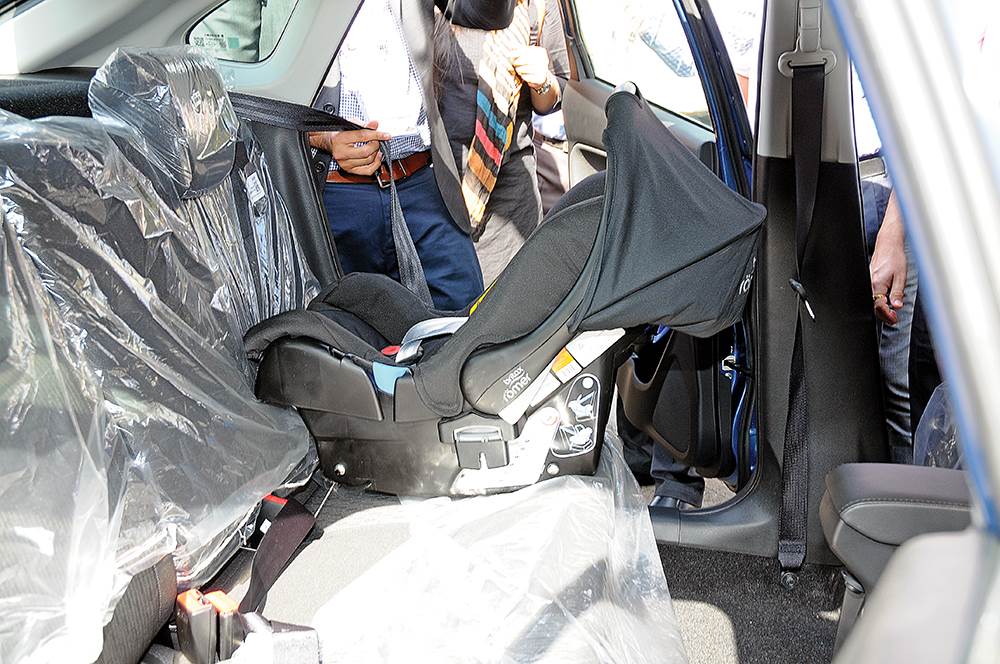 The demo session educated the attendees about Isofix and how an Isofix child seat can be easily bolted on the rear seat. The Isofix system is now available on a number of Indian cars.

JPRI had also organised two accident research competitions on the sidelines of the event. They provided two years of RASSI data collected on the Pune-Mumbai Expressway inviting participants last year so that they can prepare their respective presentations for IRCOBI Asia 2018.

“We had received about 200 entries and 25 papers were submitted. Of these nine papers were shortlisted and they made presentations. Out of those, three were selected as the best papers. The winners included young engineers from Bosch, and ARAI. The third one was The Urban Lab from Ahmedabad, who interestingly used the RASSI data to find out the infrastructure issues on the Mumbai-Pune Expressway,” Rajaraman told this publication. 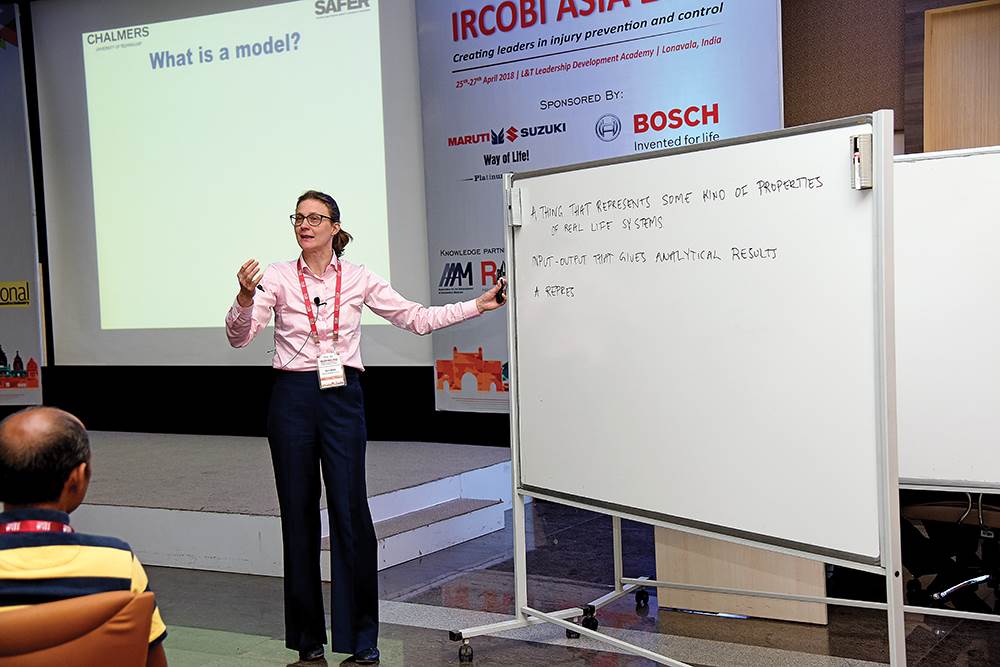 Dr Karin Brolin from Sweden is an IRCOBI Council member. She spoke on human body modelling.

The 'Best Paper' award went to Bo Sui (dangerous car-to-two-wheeler scenarios in China) and N Yoganandan and his team (human cervical spine responses under vertical dynamic loading). Jobin John from IIT Madras and his team won the 'Young Researcher' award (under 30 years) for presenting a technical paper on cervical spine. 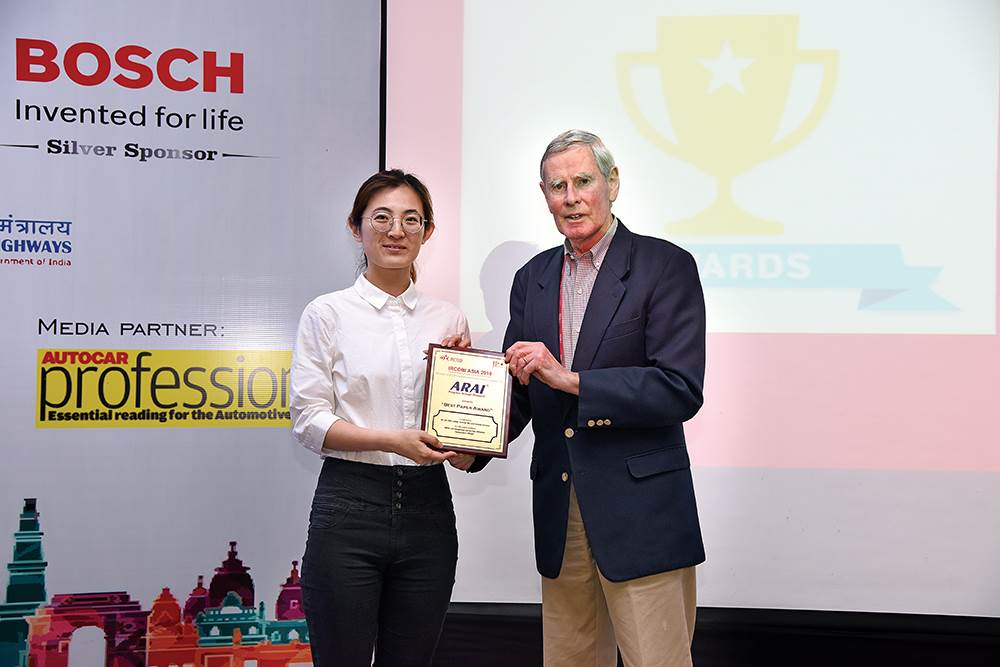 The 'Best Paper' award at IRCOBI Asia 2018 went to Bo Sui of China for her presentation on dangerous car-to-two-wheeler scenarios in China.

Summing up the conference, Simms said, “The 2018 IRCOBI conference is a landmark achievement in our aim to strengthen the understanding of injury biomechanics in world regions with particular road safety challenges. The sheer scale of preventable road deaths in India means that this is the beginning of a journey rather than an end in itself.”