The Anand Group with five manufacturing plants has spearheaded development in the verdant town of Parwanoo in Himachal Pradesh. Shobha Mathur reports. 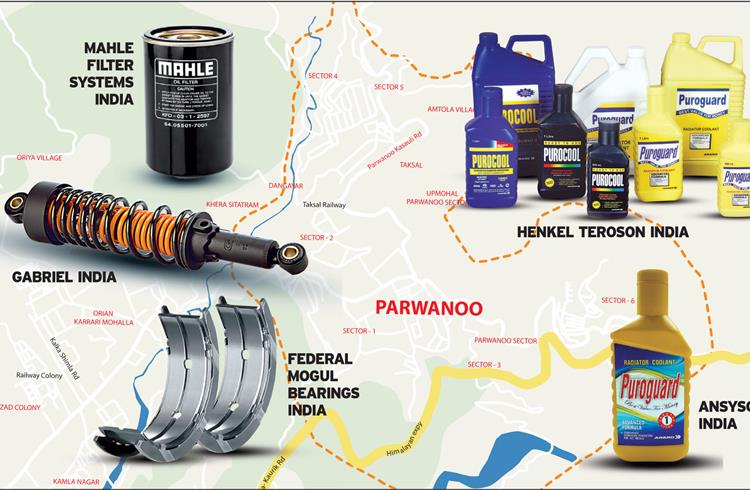 The Anand Group with five manufacturing plants has spearheaded development in the verdant town of Parwanoo in Himachal Pradesh. Shobha Mathur reports.

When the Anand Group first established itself at Parwanoo, in the Solan district of Himachal Pradesh in the mid-1970s, it was just another Indian village.

Today, 40-odd years later, this bastion of the Anand Group reveals a picturesque town thriving and a world away from its early days. The stamp of the Group is everywhere including the Anand municipal park it developed. Parwanoo is a thriving industrial town and an important hub for the Anand Group with five sister concerns having their facilities there.

The Group’s strategy behind this development is to benefit from economies of scale and increased productivity and had its origins in Himachal Pradesh’s tax-free regime. Incidentally, the latest exemption policy of the state government ended in March 2013 but these benefits continue to accrue to all those units established over the last decade.

The supplier base at Parwanoo for parts that are supplied to Anand companies for product manufacturing is also comparatively large. Almost 65 suppliers of Mahle Filter Systems India (MFSI) are based here with it buying 85 percent of parts locally. Similarly, about 5-6 suppliers exist for each of the other companies – Henkel Teroson India, Ansysco India and Anchemco as well as Gabriel India and Federal Mogul Bearings India. 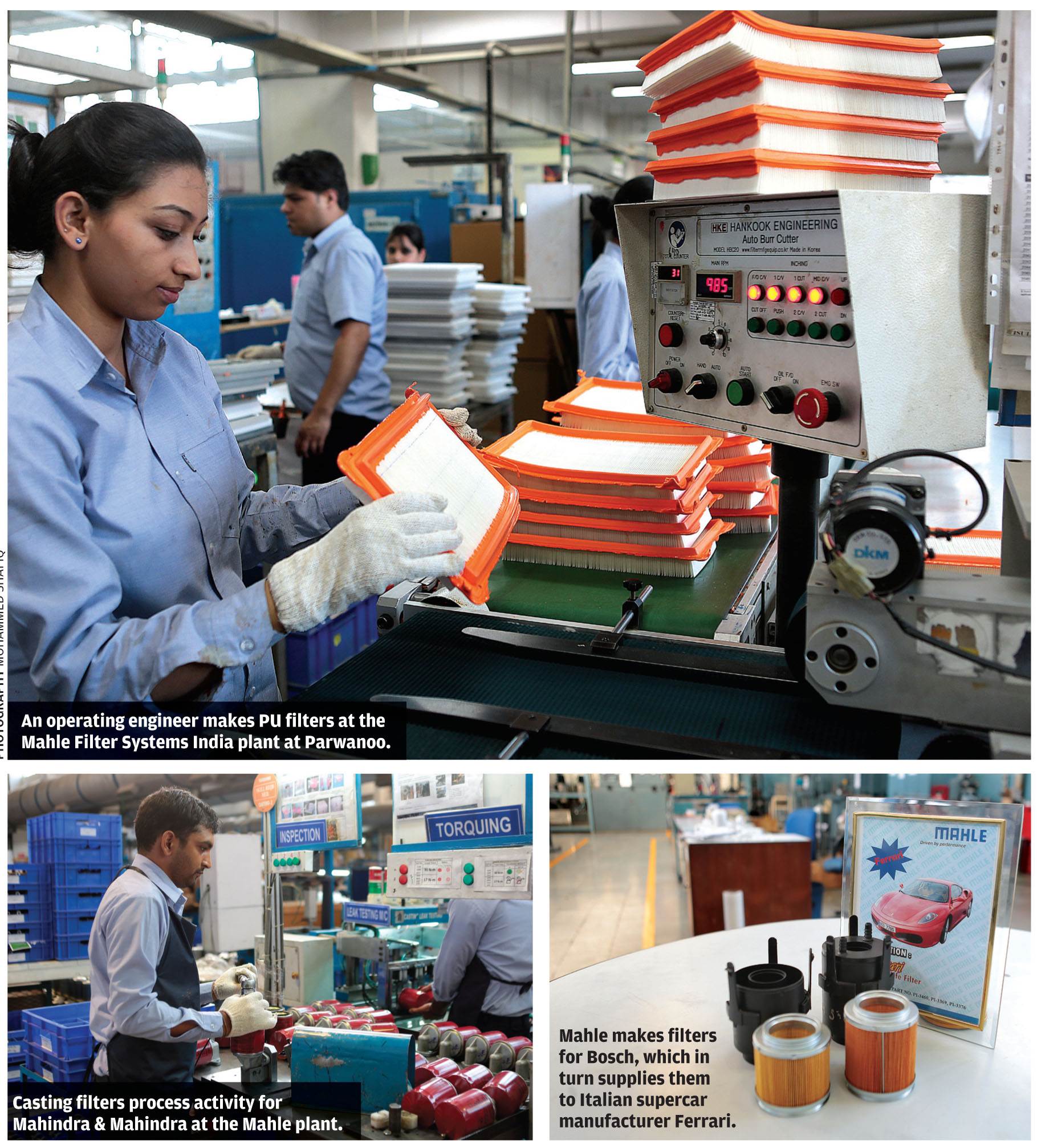 Kamaljit Singh Bhullar, president (HR), Anand Group, says: “In 1974, this place with 5,000 people was declared a backward area by the government and got incentives for industry to grow.  We were one of the first companies to set up base there, starting with Purolator (now MFSI), then Gabriel Engine Bearings (now Federal Mogul Bearings India) with Eicher following soon after. From the business perspective, we looked at establishing a good supplier base for which we motivated a lot of our Delhi suppliers to move to Parwanoo.”

The Himachal Pradesh government not only gave the Anand Group a plot to build the factory but was making industrial sheds for SSIs. In the early ’70s the Japanese ‘just-in-time’ concept had not arrived to keep inventories down. “The company was also able to develop a township for its senior personnel to stay and so a personnel committee was set up with very senior people on board who decided the policies that became a benchmark for other industries that moved there,” adds Bhullar.

At present, about 700-1,000 employees work here with about 18 percent of them being women. A highlight of the Anand Group is most workers on the assembly lines are diploma engineers with Mahle and other companies having in-house trainings. Women are an integral part of the assembly workforce. The Anand Group held recruitment camps in every district of Himachal Pradesh, even bringing a lot of ex-servicemen in the 35-40-year age group as well as skilled people.  At present, 3,000-4,000 persons are employed with suppliers.

Further, manufacturing overheads in this apple-growing belt are about 10-15 percent lower than in other parts of the country, say Pune or in Delhi-NCR. Importantly, to woo industry, Himachal Pradesh had offered a conducive investment climate till March 2013 that included a 100 percent income tax exemption for the first five years of establishing a new plant and a 30 percent exemption for the next five. A 15 percent additional incentive in terms of capital subsidy on a minimum investment of Rs 2 crore in the state is given by the government. This will amount to Rs 30 lakh for a Rs 2 crore investment.

Himachal Pradesh’s 100 percent excise exemption in vogue for a 10-year period from the inception of the unit was another boost to industry which helped grow the infrastructure here. And while most incentives have ended, Himachal Pradesh will continue the 15 percent capital subsidy for another five years.

Capitalising on this incentives policy, Mahle Filter Systems India established its manufacturing base in the region first. In a bid to further extend these incentives with the tax-free regime drawing to a close, a second facility was established in 2010 that will encash the spin-offs of the 10-year tax exemptions. At present, MFSI is now moving some of the aftermarket products produced in plant 1 to plant 2.

“It will create brand value with customers. After the year 2020, the second unit will also go into excise.  The plant makes a lot more aftermarket products and spare parts while the first facility is mainly for supply of filters to OEMs,” explains Puneet Kumar Gupta, Location Head (north), MFSI.

However, with the curtains down on most of the incentives, there is speculation in industry that some companies may leave the area. Realty prices and rentals are expected to fall as well.

But Parwanoo is steadily becoming important for MFSI as a new investment of Rs 11 crore has just flowed into a second assembly line. The new plant will make 40 filters per minute or 16,000 filters per shift, running three shifts. A high point will be its production of spin-on category of filters that will not be produced at any other facility with those made at Gurgaon and Pune slated to be shifted here.

Some key customers for MFSI at Parwanoo are Bosch for which it is a Tier 2 vendor. As a Tier 1 player, it supplies to Mahindra & Mahindra and Tata Motors in Uttarakhand that has a similar excise regime. The exemptions are mainly for aftermarket  and spare parts and not for OEM products.

MFSI supplies gasoline (petrol) filters to Italian supercar manufacturer Ferrari through Bosch from its Parwanoo plant. These are harnessed for a different application from that used in India at present. The product constitutes an in-tank filter, specially mounted inside the fuel tank and having a pump, which pumps the fuel from tank to the engine inside the filter itself. Mahle says it has the smallest pump in the world, made by Bosch Czechoslovakia, and assembled by the German component major after the filter is supplied by MFSI. This unit has been supplied to maximum models of Ferrari except its racing cars. The petrol filters are also supplied to Bosch Spain, which also makes the housings and does the final assembly. The business that started with supplies of one container a month since 1995-96 is now slowing down as new and more advanced technologies are coming in cars wherein third-generation filters have water separation devices. Bosch, it is believed, sources the filters from Mahle in India as they are cost competitive and of good quality compared to European filters.

Gabriel India is still under the excise exemption umbrella till 2017and provides shock absorbers to Tata Motors at Pantnagar and TVS Motor in Baddi from Parwanoo. It also makes struts and front forks. Henkel makes sealants, structural adhesives and NVH parts on the other hand and is predominantly OEM-based and does not reap exemption benefits as supplies to OEMs do not draw any excise exemptions.

Ansysco that produces PVC self-adhesives, radiator coolants, dgx cartridges and glazing adhesives is again predominantly OEM while Anchemco continues to get a 10-year exemption as it caters to both OEMs and the aftermarket. The biggest buyer of adhesives from Henkel though is Mahle. For Federal Mogul’s bearings, the biggest customer is Tata Motors and it is also a large supplier to its overseas plants. Even Federal Mogul Bearings India does not reap the benefit of exemptions as its products go directly into vehicles and are not designed for the aftermarket. 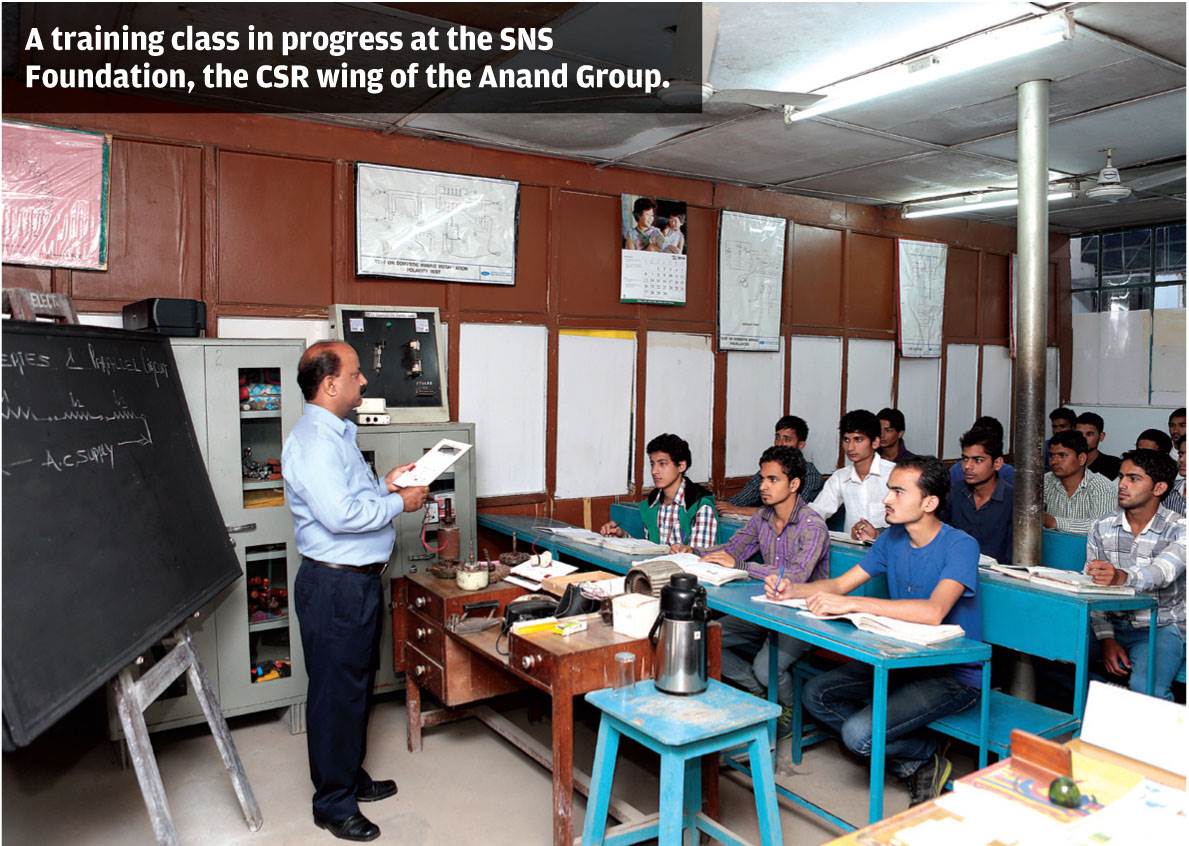 Like MFSI, Gabriel has indicated plans to bring all its aftermarket products from different locations and consolidate over 75 percent of the productline at Parwanoo. “We make products for two-wheelers, three-wheelers and four-wheelers, both for the aftermarket and OEMs, with key customers being Tata Motors at Pantnagar and TVS Nalagarh besides M&M Haridwar. The monthly production capacity at this plant is 215,000 shock absorbers, 40,000 struts,
and 13,000-14,000 front fork vehicle sets,” says R Vasudevan, plant manager of Gabriel India.

The plant makes 60 percent for the aftermarket and 40 percent for OEMs and is the youngest plant in Gabriel with an average worker age of 21-22 years. The idea is that with new vehicles going out of warranty within two years, spare parts would then be sourced from the aftermarket. Four specially challenged students, who received electrical training in the SNS Foundation, the welfare arm of the Anand Group, work at the packaging operations.

Last month, the Himachal Pradesh government announced that at least one percent of all workforce in the state should have differently-abled people deployed in industry. Vasudevan says Gabriel has taken a lead with already over one percent of the 200 workforce hailing from this category.  This plant has 50 percent women on the shopfloor.

We took a look at Anchemco’s new facility under construction while touring Henkel and Ansysco’s plants located adjacently. Anchemco’s new building will be ready next year. It is a sister concern of Ansysco and holds the distinction of having the maximum number of women on the shopfloor, at 75 percent, of the total 50 employees currently deployed. An investment of Rs 2.5 crore has gone into establishing the new setup.

Mahle with its two plants posted sales worth Rs 240 crore and Gabriel, Rs 150 crore in CY 2013. Henkel accounted for Rs 40 crore in CY’13 with Ansysco chipping in with Rs 25 crore in FY’14 while Federal Mogul Bearings India accounted for Rs 86 crore in CY 2013 at Parwanoo. Around Rs 541 crore revenue was generated at Parwanoo during CY’13 for the Anand Group’s business. During the same period, the Group notched a turnover of over Rs 6,000 crore. 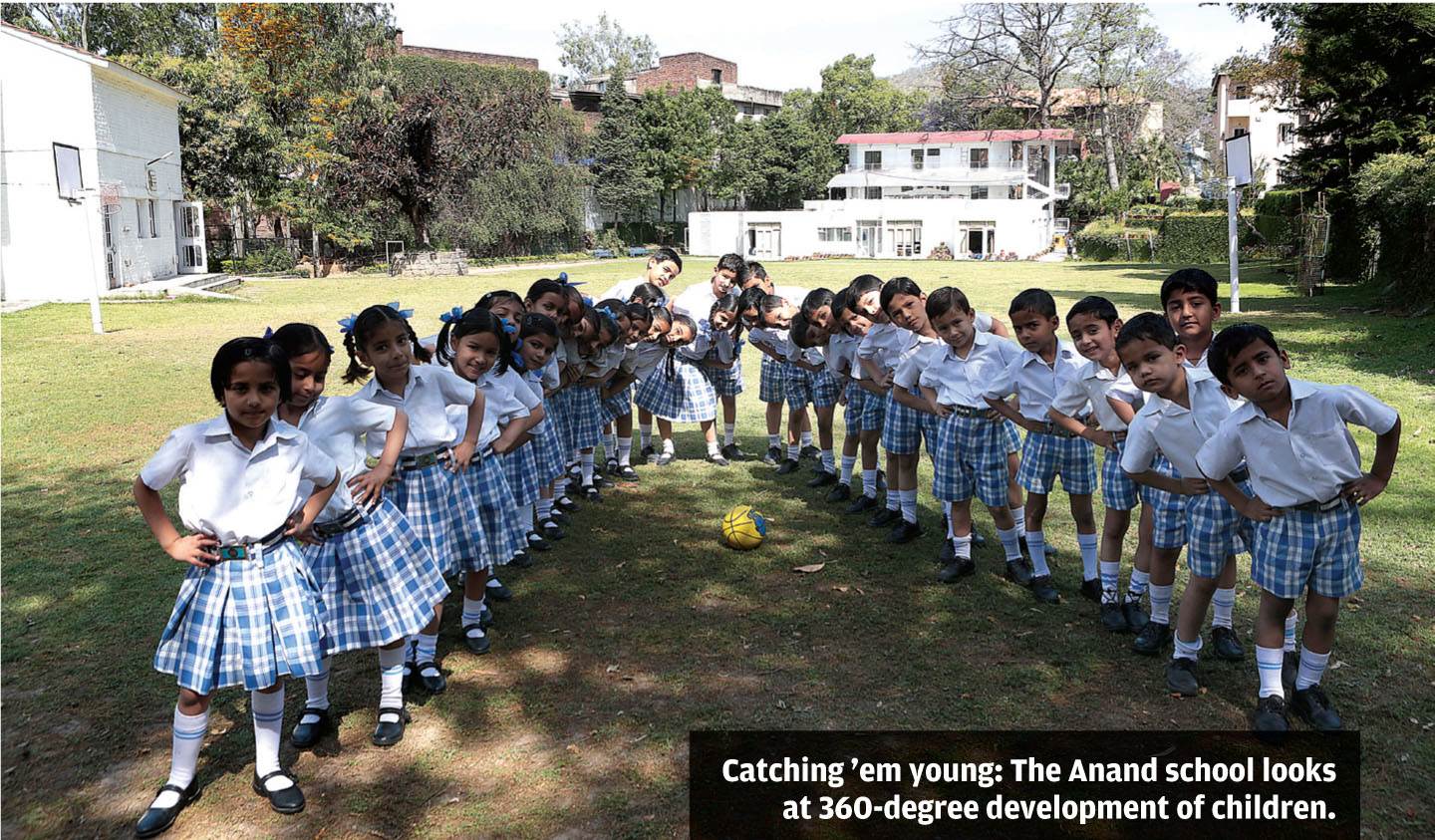 no kidding, school is serious business

Meanwhile, the Anand School now extends to Class 7 and may well become a high school later, with new classes being added yearly. However, finding good talent remains a challenge here given the limited options for a life after work.  Adequate infrastructure and proper town planning are still lacking. The state government though has been trying to provide training and even the Anand University, which originated in Parwanoo, provides technical and non-technical training. Every employee in Anand has to go through 40 hours of training in a year with every factory having a training centre.

Seen overall, it is consolidation time at this Anand Group hub. There is still space for further expansion at existing company premises. As Anand weaves the town's growth culture around itself, Parwanoo is all set to contribute its bit to the Anand Group’s long-term target of achieving a
Rs 10,000 crore topline by 2016.