Industry leader Hero MotoCorp pulls up overall industry growth in June 2017, stands out as the largest volume gainer during the month. 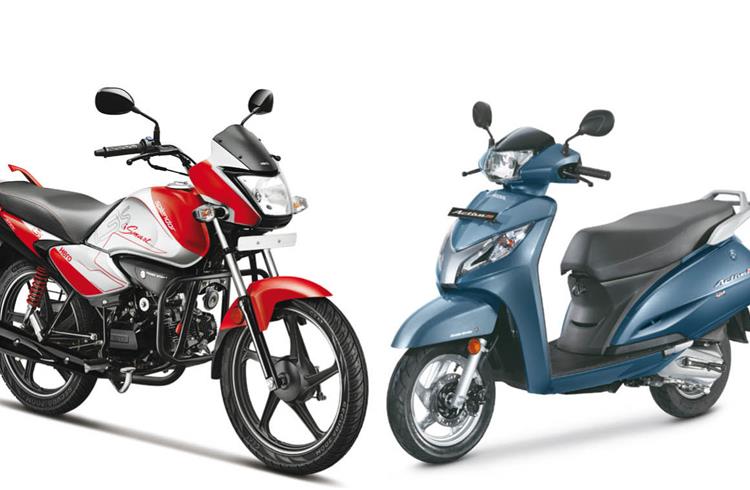 According to an official company release, Hero registered robust growth on the back of solid performances by both – scooters as well as motorcycles. The company sold 547,185 motorcycles (up by 13 percent YoY) and 77,000 scooters, up by 22 percent YoY.

While demand, according to the company, is up for its commuter bikes that include the Splendor, Passion, HF Deluxe, Glamour and Achiever, scooter volumes appear to have gained from its marketing activities during the previous month. “Scooters have gained volumes driven by the very effective ‘360 degree’ Go-To-Market programs along-with the introduction of new upgrades and refreshes earlier in the quarter,” quotes the company release.

Like other OEMs – both in the two-wheeler and four-wheeler space – Hero MotoCorp has begun passing on GST benefits to vehicle buyers, the quantum of reduction ranging from Rs 400 to Rs 1800 on mass-selling models.

Honda’s recently launched 110cc scooter Cliq, which has become India’s most affordable scooter in the 100cc and above categories, is expected to soon start contributing substantially to its monthly volumes. The company is working to make the model available across India in a phased manner.

Bajaj Auto has reported a decline of 35.89 percent YoY in its June 2017 sales. It sold 108,109 units last month as against 168,625 units sold in June 2016. The company has just rolled out the Pulsar NS160 in the premium commuter motorcycle segment in an attempt to boost its sales. The model will compete with Honda’s 160cc Unicorn models, Suzuki’s 155cc Gixxer family and TVS Motor’s Apache RTR 160.

Suzuki Motorcycle India has registered sales of 33,573 units in June 2017, up by an impressive growth of 58.59 percent YoY. Suzuki’s 125cc Access 125 scooter continues to drive its monthly volumes in the domestic market. It is estimated that the Access 125 is the largest selling model for Suzuki in Asia, including its volumes from India and Asian countries.

According to an official note from Suzuki, the company’s total sales stood at 38,454 units (in June 2017) as against 30,188 units in June 2016. “This is the fifth consecutive month in which Suzuki has witnessed double-digit growth in its total sales, inclusive of exports,” quotes the document.

With monsoons picking up, along with the GST momentum, it is expected that the market has no reason to not perform well in the coming months.