One of the main reasons contributing to falling demand for diesel-engined cars is the diminishing differential between the retail price of petrol and diesel. 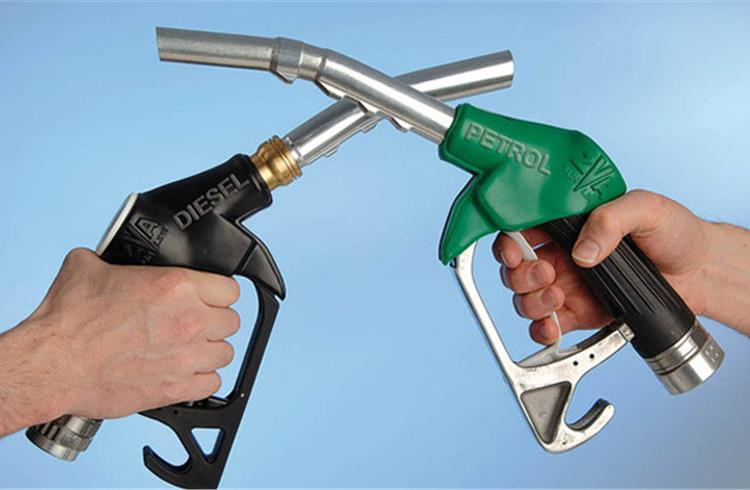 Businesses need to recognise change and be nimble-footed in implementing the same. History is replete with examples where organisations which have been slow in recognising market change have fallen behind. A transformation seems to be gradually sweeping the Indian passenger vehicle (PV) industry, more so in the diesel vehicle segment which has compelled many OEMs to take notice.

Traditionally, the domestic market share for diesel vehicles in the overall PV market has had a decent share but has been on a downward spiral since the past few years due to various factors. From a high of 58 percent in FY2013, diesel PV market share has plummeted to 38 percent in FY2018 and is expected to further decline to 35-36 percent in FY2019. Ultimately, it will fall to below 25 percent levels over the next four years.

One of the main reasons contributing to falling demand is the diminishing differential between the retail price of petrol and diesel. Since January 2013, regular increases in the retail price of diesel in small doses every month have vastly narrowed down the price differential between the two fuels, thereby making the current cost economics of owning a diesel PV relatively less favourable compared to the past.

Typically, the petrol and diesel price gap displays a high degree of correlation (price difference per litre of fuel) with diesel vehicle demand; therefore, the lower fuel price gap has resulted in customer preference shifting away from diesel vehicles. Many OEMs with diesel-heavy portfolios have had to bear the brunt as their market shares were negatively impacted due to shifting consumer preferences. Gradually, OEMs have adapted to change and only recently have launched petrol SUV models. Further, to optimally utilise resources, they are investing in flexible engine assembly lines instead of dedicated assembly lines for diesel or petrol engines. And incremental investments in diesel engine capacity have taken a backseat, thereby limiting additional diesel engine capacity.

BS VI to hit diesel vehicle demand even more
A big blow to diesel vehicle demand is expected to come from BS VI norms, effective April 2020. The norms will require OEMs to effect significant changes/addition in the after-treatment component which is bound to raise the price of a diesel car by about Rs 75,000 a car as compared to around Rs 20,000 for a petrol car. Currently, the cost of a diesel PV is about Rs 90,000–100,000 higher than its petrol sibling but with the advent of Euro 6 norms, this gap will widen to Rs 150,000–175,000, consequently further reducing the advantage of higher fuel efficiency.

For small car buyers, this will be an uneconomical proposition as their break-even will increase. SUVs too will be impacted as their market share is expected to decline from over 80 percent at present to sub-60 percent level over the next four years albeit they will continue to dominate the market.

Increased hybridisation will also make diesel cars unattractive for OEMs. One of the primary reasons for the diesel push by OEMs at present is lower CO2 emission compared to petrol cars. However, hybrid cars not only provide lower CO2 emission per litre of fuel consumption, but petrol along with an EV powertrain can also offset the fuel efficiency advantage of a diesel vehicle. In the event hybridisation gains momentum, diesel powertrains will lose their attractiveness amongst OEMs as well. Currently, the prohibitive tax structure on hybrid cars is a deterrent for OEMs to price their products competitively as compared to their diesel counterparts. However, this could change in the long term due to an increase in prices of diesel vehicles after BS VI norms kick in as well as a possible tax rebate on hybrid cars complying with stricter emission norms.

The Indian market has followed European emission norms for diesel vehicles. In line with the trend in Europe, petrol is taxed heavily in India as compared to diesel, resulting in the fuel price gap. India has traditionally followed Europe because of similar emission norms and tax policy on fuel (petrol taxed heavier than diesel). Over the past few years, stricter regulations coupled with environmental concerns have resulted in a steady decline in diesel car sales.

Prior to 2013, technological advancements had resulted in significant improvement in performance of diesel cars which coupled with lower prices on diesel (as compared to petrol), superior fuel efficiency and favourable regulatory norms supported steady increase in diesel vehicle share in the overall new vehicle registration. However, this changed since 2013 after various European governments realised the impact of harmful NOx and PM emissions. Changes in tax structure and narrowed price differential between petrol and diesel coupled with diesel scrappage policies, customer incentives to swap diesel vehicle with electric or hybrid vehicles have deterred diesel sales. Consequently, its share has declined in almost all key European markets, from 53 percent in CY2014 to 44 percent in CY2017.

So how is the current Indian scenario likely to evolve?

At present, the small car segment is largely petrol-driven while the UV segment is diesel-driven. As for the executive and the luxury segments, the sales mix is tilted in favour of diesel cars. In the passenger car segment, the share of diesel cars remains low at ~23 percent and will drop below 12 percent. The share of diesel vehicles, which were relatively higher at 80 percent in the UV segment, will gradually reduce to sub-60 percent levels over the next four years.

Over the last two fiscals, the strong double-digit growth in the diesel-heavy UV segment had softened the impact of declining diesel share in the passenger car segment. It is forecasted that though the improved traction of the petrol engine, especially in the compact UV segment, will result in dilution of the diesel share in the UV segment over the medium term, the share of UVs in overall domestic PV sales is expected to increase to 35 percent over the next four years (vs 28% in FY2018) which will provide some support to diesel’s share. Nonetheless, the overall share of diesel vehicles in India is likely to decline to 35-36 percent in FY2019 and eventually below 25 percent when BS VI norms come into play in April 2020.