Swift, Baleno and Dzire save the blushes for Maruti Suzuki in July 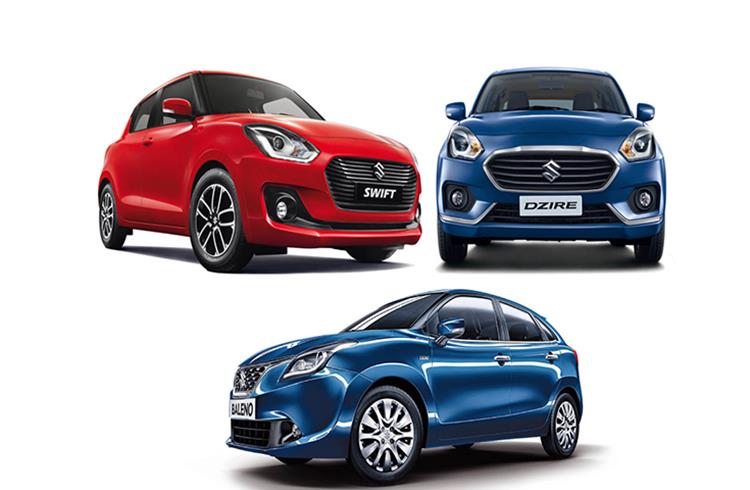 Maruti Suzuki India, the country’s leading carmaker, has announced its sales results for July 2018 –  a total of 154,150 passenger vehicles in the domestic market.

While the numbers are praiseworthy by industry standards – an average of 4,972 cars each day last month, the near-flat performance comes on the back of a high year-ago base, when sales in July 2017 soared by 22 percent to 153,298 units, owing to the immediate tax relief following the implementation of the GST regime.

Maruti’s range of compact cars remains the key volumes drivers, with the Maruti Swift and the Dzire running away in their respective segments. With the Ignis, Celerio and the Baleno included, the collective sales of these five models stood at 74,373 units last month, a notable jump of 17.8 percent over the year-ago sales of 63,116 units. Clearly, the Swift hatchback is the one to be leading the pack, recently surpassing the 100,000 sales milestone on June 13. Meanwhile, the Baleno drove past the 400,000 mark within 32 months of getting introduced into the Indian market. The Dzire compact sedan too has been in the front row, what being the best-selling car for the company, clocking 18,758 units in June alone.

While the Swift and the Dzire continue to sway Indian buyers, the story remains worrisome for Maruti’s entry-level Alto and the Wagon R mass-market offerings, whose sales have fallen by a substantial 10.9 percent, their combined sales standing at 37,710 units (July 2017: 42,310). Another concern has been the continuously falling sales of the premium Ciaz sedan, whose numbers have dropped by almost 100 percent to a mere 48 units last month (July 2017: 6,377). While the decline in Ciaz sales has been consistent, the sharper drop in the past few months is because Maruti Suzuki is all set to introduce the facelift version of the car later this month on August 20.

The updated Ciaz is expected to come with styling tweaks including a revised LED headlamp setup, a new grille, updated alloy wheels, and the most pertinent aspect – a brand new 1.5-litre petrol motor with the company’s SHVS mild-hybrid technology – upgraded from the 1.4-litre unit doing duty on the outgoing car. With the newer avatar, Maruti will aim to make its comeback into the competition with the Honda City, Hyundai Verna, and the Toyota Yaris as well.

UV sales drop by 5 percent in July
July also saw Maruti’s sale of utility vehicles take a hit. The company’s UV portfolio, which comprises the quartet of the Gypsy, Ertiga, Vitara Brezza and the S-Cross, sold a total of 24,505 units (July 2017: 25,781), indicating at a likely production shift to better manage the strong initial demand for the new Swift, and also a stability in the sales, especially the Vitara Brezza, which contributes to over 60 percent of the company’s total UV volumes.

Its two vans, the Omni and the Eeco sold 15,791 units, flat growth of 0.5 percent (July 2017: 15,714). While Maruti Suzuki still remains the king of the Indian PV market, its growth being driven by a handful of models out of an expansive line-up could be a cause of some serious concern over the longer term. Stay tuned as we will monitor this trend in the coming months. 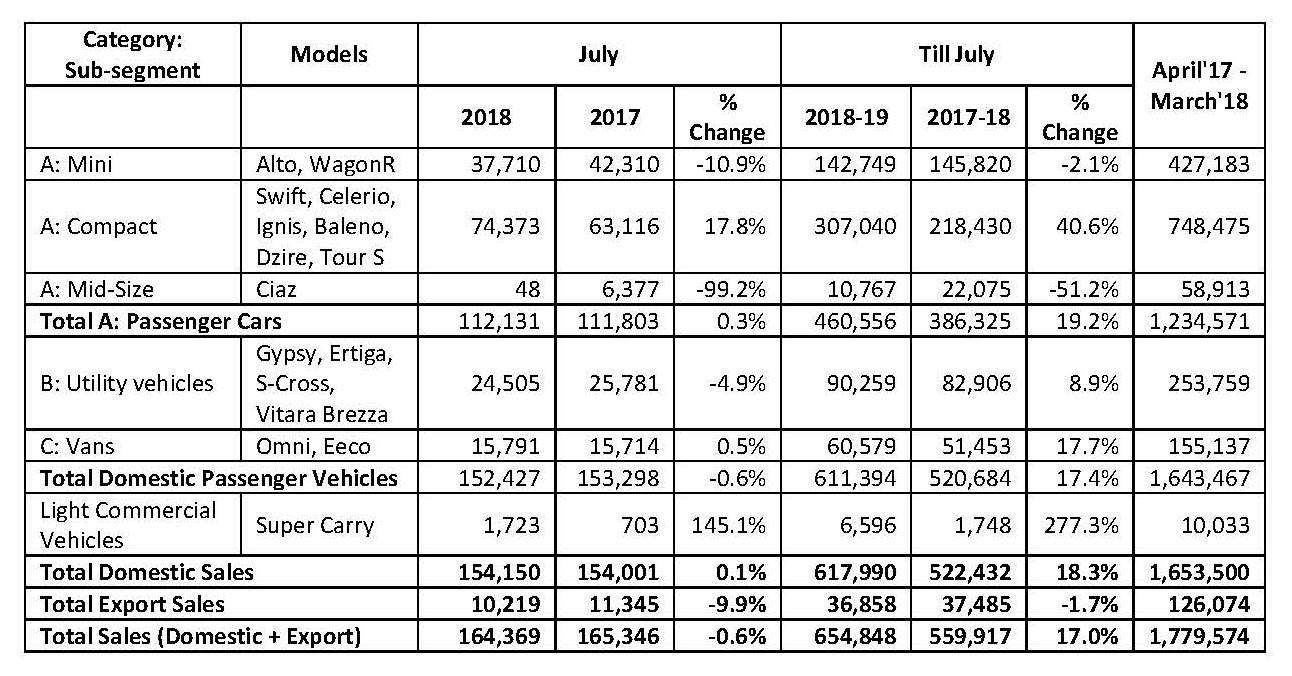