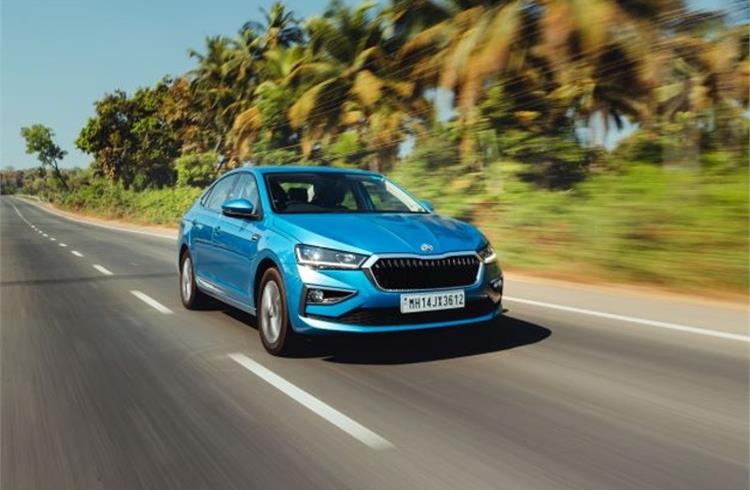 Skoda Auto India has launched the Slavia midsize sedan at prices ranging from Rs 10.69 lakh to Rs 15.39 lakh, ex-showroom. The company has announced prices for the 1.0 TSI petrol engine versions of the Slavia, with the bigger-displacement 1.5 TSI petrol unit set to see a price announcement on March 3.

The Slavia in its 115hp, 1.0-litre, three-cylinder engine form commands over 90 percent localisation which makes this offering competitive in the midsize sedan segment which is ruled by the Honda City, and also receives formidable competition from the Hyundai Verna and Maruti Ciaz.

The 1.0-litre engine comes mated to a six-speed manual or a 6-speed torque-convertor automatic transmission. ARAI-certified fuel efficiency figures for the Slavia 1.0 TSI are pegged at 18.07kpl for the manual and 19.47kpl for automatic transmission versions. While the Slavia is being offered in three trim levels - Active, Ambition and Style - the 150hp, 1.5-litre, four-cylinder engine is only being locally assembled in India, and will be available only in the top-end Style variant, both with manual as well as automatic drivetrain options.

The carmaker had launched a refreshed Kodiaq SUV in January, the first of six  launches planned for this calendar. It has indicated that the Kushaq and Slavia could sell 2,500 units a piece, thereby making the two models its biggest contributors at 60,000 units in this calendar. The company which clocked sales of 23,858 vehicles in 2021, has set a target of growing three times to over 71,000 units in the current year, and further scaling up to 100,000 units by 2025.

The Slavia gets features like LED headlamps with integrated DRLs, 16-inch alloy wheels, sunroof and 521 litres of boot capacity. It also boasts a segment-best wheelbase of 2,651mm by virtue of the underlying Volkswagen MQB-A0-IN platform. The cabin features a dual-tone colour upholstery, a 10-inch infotainment, as well as an 8-inch digital instrument cluster. It gets ventilated front seats, a feather-touch panel for the climate control system, and an eight-speaker audio setup with an additional subwoofer in the boot. Skoda is offering top-notch safety kit in the Slavia, with features such as six airbags, multi-collision braking, an electronic differential system and ESC.