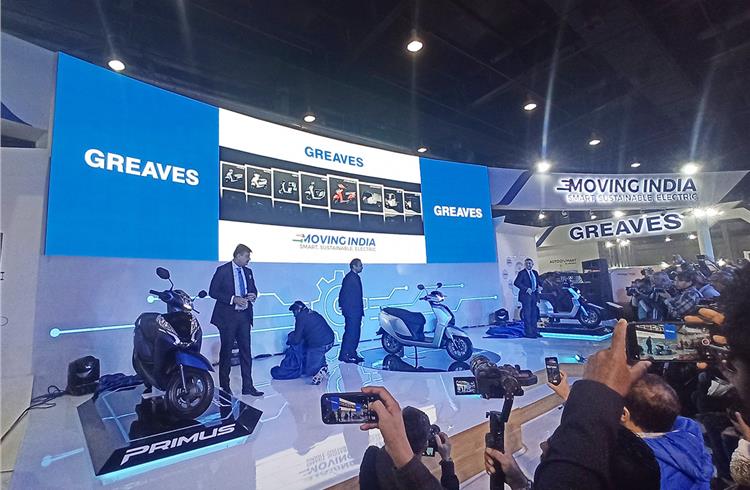 Greaves Cotton, the diversified engineering company and well-known manufacturer of powertrain solutions in CNG, petrol and diesel engine applications in India, aims to become a full-service electric mobility player. The company is already present in the e-mobility market with a number of products.

The genesis for the company’s future growth strategy seems to stem from its confidence in its in-house capabilities and its reluctance to outsource and face supply chain uncertainties. The 163-year-old Greaves Cotton has announced plans for backward integration with powertrain manufacturing and is in talks with several global component makers. According to Greaves, this move will allow it to have better control of the supply chain. Greaves Electric Mobility (GEM) manufactures electric two-wheelers under the Ampere Vehicles brand name and e-three-wheelers (e-auto and e-rickshaw) under the brands Ele and Teja.

Greaves says its entry in the powertrain business with in-house manufacturing of batteries, motors, controllers and other critical EV parts will help bring down production costs of its products. Nagesh Basavanhalli, Vice-Chairman of Greaves Cotton, confirmed this development on the sidelines of the Auto Expo 2023 underway in New Delhi. The diesel engines-to-EV OEM today revealed six new models in its electric two- and three-wheeler portfolio at the show.

“Disruption is happening. New technology is coming in. Even as India is looking to target one million EVs, we plan to enter into powertrain manufacturing and critical components and ride on our legacy of being an OEM to various automakers to take away a significant chunk of the B2C market and B2B market,” Basavanhalli said.

Getting future-ready for an electrified future

According to Basavanhalli, Greaves Electric Mobility has invested in enhancing existing production capacity from a quarter-million units to half-a-million units. Now, given the EV industry’s growth potential in India, the company is looking to double capacity to hit the one-million-units mark. “Once the powertrain business takes off, economies of scale will kick in and thereby empower the company with double-engine growth with a pie in both the B2C and B2B markets,” he added.

“We are preparing a mobility business to go to the next level. Our electric powertrain side, which includes grid mortars, packs and controllers, will ensure full control of the supply chain as well as serve some other customers in the EV industry, who can look at our history of working with OEMs for their ongoing component needs as well,” said Basavanhalli. Work is already underway on this and “over the next few months, we will lay all of that out.”

Greaves has already designed the prototypes of e-motors and battery packs, something which it plans to discuss with other EV makers as well. “We see this as a huge opportunity with us being an engine supplier, understanding the volume production at scale and supply chains, and also the ability to deliver the right TCO. We believe in our long-term focus. As regards our powertrain, we transition all the core engine manufacturing data. We have a couple of opportunities wherein we are looking at making individual powertrains and developing homegrown technology partnerships around motors and controllers and battery packs as we have done with engines,” says Basavanhalli.

Greaves Electric Mobility, which has its two-wheeler manufacturing plant in Ranipet in Tamil Nadu and in Hyderabad for three-wheelers, received a new financial charge in June 2022 when it secured funding of $220 million (Rs 1,700 crore) from Abdul Latif Jameel, an independent, family-owned, diversified global investor and operator. GEM is to use the funds in new products, associated technologies, brand building and enhance manufacturing capacity.

The medium-term growth strategy envisages investing Rs 800 crore over the next five years, which will help Greaves double its electric two-wheeler manufacturing capacity. It also plans to move from mechatronics to an electronics design for which Rs 200 crore capex has been earmarked till end- FY2024.

“In 2016, 80 percent of our profits came from a single customer selling engines to Piaggio. Today, 65% of our revenue comes from the B2C side,” says Basavanhalli.

Meanwhile, the EV OEM is also scouting for the right technology partner which can incrementally add to technology and address the demanding duty cycle needs of new start-ups as well as established OEMs. Basavanhalli says the reason he is extremely bullish on Greaves Cotton’s future lies in his ability to sell the EVs to the Group's retail channels or service vehicles in the field service network and self-finance it to the largest extent. “We believe from an ecosystem perspective, looking at the value chain – we said here is where we can add value. So, the entire strategic mantra is to go from being an engine supplier to a full cycle value extractor.”

Does he plan to also look at other alternate chemistries in battery packs or get into cell manufacturing itself? “Battery chemistries may change from LFP to NMC or even sodium ion in the future for which we are looking to brace up. But we're not investing in cells,” he confirmed.

The Vice-Chairman of Greaves Cotton says that the company’s next five-year plan revolves right beyond the next three years. “I think we have plans to kind of begin at the right time,” he said.

Will the company exit the diesel engine business completely and focus only on EVs? According to Basavanhalli: “On the diesel engines, we were a majority player for all small three-wheelers through to the four-wheeler segment and it is one segment which will stay as ICE despite the transition to EV.”

Commenting on the prospect of launching an e-LCV, Basavanhalli said that for the moment the plan is to stick to two- and three-wheeled EVs but in the long term GEM will definitely move into that bigger vehicle category. “We are already seeing customers like Amazon or BigBasket when we  ask for volumes, new applications or a skateboard platform.

So, what's the immediate challenge now? Basavanhalli says: “I'm waiting to see how our customers evaluate what we have shown at the Auto Expo and pick up the business strands from there.”