'If India had a big push in EVs, the UCAL-Orbital influence would likely be a range extender.'

Terry Stinson, Orbital Corporation’s CEO & MD, speaks to Brian de Souza on the company’s expertise in fuel testing and emissions and the promise of its tie-up with UCAL Fuel Systems. 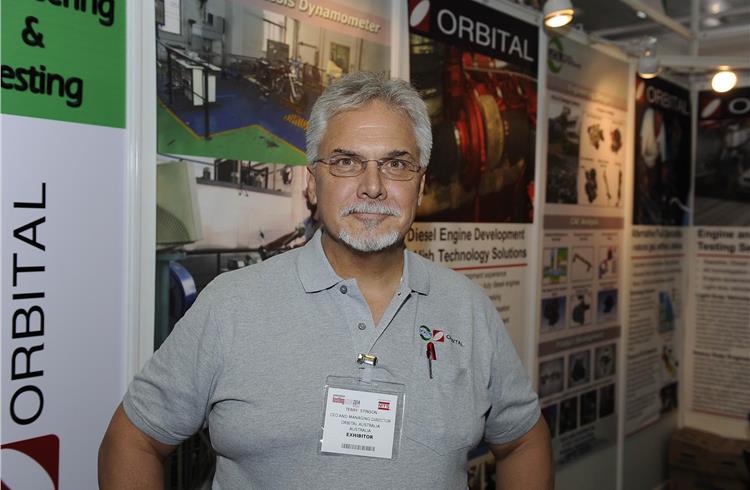 Terry Stinson, Orbital Corporation’s CEO & MD, speaks to Brian de Souza on the company’s expertise in fuel testing and emissions and the promise of its tie-up with Ucal Fuel Systems.

We have had a plan to alliance with UCAL and have worked on joint projects in India for many years now. We have done commercial projects. In fact, Ucal identified a gap of sorts in the market for engineering and testing. That there was no company that does what a company like Ricardo can do.

We do what a Ricardo does but on a very small scale. We cannot build scale like say AVL can or for that matter cater to India out of our base in Perth. So we have decided to a joint venture.

We bring our advanced technology and combine that into UCAL’s  R&D set-up here. They have dynamometers and have parts testing. But what they do not have is advanced combustion and direct injection work which is what we bring to the table. That is our expertise. So we take their low-cost base in Chennai and we bring in people from our facility and attempt to fill the gap in the market.

The JV will be UCAL-controlled and though the final equity stakes are not yet decided, it will probably be 60:40 for UCAL. We hope to do business as a local company would and leverage local talent in our niche area.

What are Orbital’s strengths?

Our foundation is direct injection. We are pioneers in this field. We have projects that go back to 1996, to the US, where we started out. But that was for the marine sector.

We have since done projects for Aprilia and Piaggio and so we have this base that we can share with UCAL. They have the infrastructure. Our USP is DI (direct injection) which we know well. It is the engine and the eco-system and the testing that is involved.

One example of a project that we done in fuel efficiency is an automotive one that we did with Chang’an in China. It involved a four-wheeler engine with a four-cylinder engine. It was a Camry-sized vehicle and we were able to achieve a 20 percent reduction in fuel consumption. We did this using Orbital technology and this is a benchmark.

As Orbital we bring both hardware and software. We will start out with engineering and testing and do that on a contract basis, and as we establish our base, we can move into systems. Our primary focus will be natural gas and it has huge scope. So too for India. We will offer testing and direct-injection based on natural gas. Orbital did a few projects a few years ago that got written about in an SAE research paper. We did a project with Renault. We took the DI technology to Renault and had it installed on an engine and were able to achieve significant improvements in power, performance and fuel efficiency.

There is a lot of natural gas in India but if you use petrol or diesel, and convert it to port-injected natural gas, it loses power. On an R&D basis we at Orbital have proved that we can achieve the same power.

So if we take a light vehicle and put it on gas, one can save money. The real challenge is that as you move up to more stringent emission norms, you have to be able to handle particulate emissions. So the filters required are very expensive, for example. With gas, this is not a problem and so represents the potential and promise that holds for India.

Will the joint venture with UCAL Systems involve staff training?

It will definitely involve training and our plans, details of which have not been fleshed out, is to rotate UCAL’s engineers in and out of our facility at Orbital. We will also have engineers stationed here to learn about Indian conditions, the culture and so on.

What are the trends seen in India or emerging markets as far as testing goes?

With regard to development and testing, there is a push in the direction of fuel efficiency in India, how do you reduce the overall cost per kilometre and therefore natural gas is key. One has to do advanced testing for particulates as well, which is not prevalent here.

In addition, one has to be able to precisely measure what you need to do for fuel economy improvement. We have done in-cylinder combustion pressure measurement, one of many variables that we do. That makes it worthwhile coming to India. We do a lot of research for Indian companies from our base in Australia but we can now do that right here.

We do have a few projects here that pertain to fuel efficiency and testing. We have alternative fuel projects among those. Our joint venture with Continental makes ECUs and fuel injection systems and ancillaries. Take the Indian two-wheeler market and that represents a huge opportunity. So if emissions norms change, like they did in Taiwan, it is a huge market opportunity, second only to China in the world. In India, you have foreign companies providing fuel systems and I want to see our UCAL’s name right ahead.

India is a keen challenge, especially when you look at the cost targets to be met.

Does Orbital have capabilities that can help the pure EV?

We have for hybrid not pure electric but that is not our focus. We have had small evaluation projects abroad but not in India. It’s a new area and but we have an interest but more from a propulsion side. If India had a big push in electric vehicles, the UCAL-Orbital influence would likely be seen in what is called a range extender.

Finally, which are the Indian companies that you admire?

I do admire a quite a few. I have been to India first in the late 1980s. Amongthose I admire are Tata Motors which has done incredible work with the Nano. Then there is Ashok Leyland, which I admire. There is a lot of technical capability that has not been used. We have worked with Bajaj Auto and its GDI has some of our technology. I saw the RE60 at the Auto Expo in Delhi and it's incredible. Another company I admire is Mahindra & Mahindra.