ARAI's Director on the changing landscape for automotive technologies, prospects for alternate fuels, new efforts at ARAI, and more 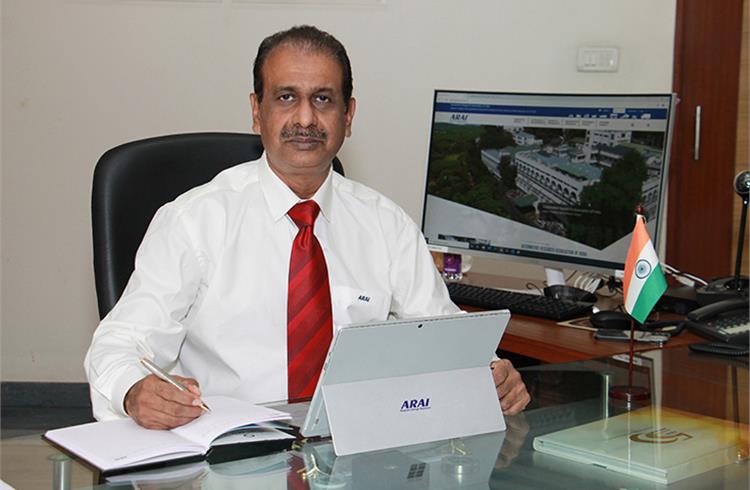 The Director, Automotive Research Association of India (ARAI), talks about the changing landscape for automotive technologies, prospects for alternate fuels, new
efforts at ARAI, and more, with Sumantra Bibhuti Barooah.

Ever since you took over your current role, what are the 2-3 key focus areas that have been occupying more mind space?
The first thing I wanted after taking over is to understand the industry need and how it is progressing. So, we had a lot of interaction with the industry — it is a continued process for us so that we can calibrate and equip ourselves in the right way.

We have also been focusing on research and development because we believe that innovation can only be the differential. That aspect needs to be built in and we need to have a real allocation for R&D. We have now allocated some clear-cut funds for that. Certain areas have been identified and each department told to think about research projects also along with the testing and evaluation aspects. We are also exploring new facilities particularly in upcoming technology areas, not only for what just meets our regulations but beyond that for developmental activities. We believe that we can collaborate with players with similar thoughts and plans, and I have been very happy with the industry in that front. Industry is already forthcoming with many ideas and how they can associate with us. This is an area we are really going to take a lead on.

Could you throw some more light on the new centres, or the technology areas like AI?
Electric vehicles is an emerging field and we are already ready for any evaluation related to that as well as any advanced evaluation.

The other is about connected vehicles and ADAS. We are thinking about putting tracks for that on land we have acquired. Then there is something on the areas of battery management system, indigenisation of thermal management. These are the areas we are very focused on.

As regards autonomous driving, there are institutes which have asked us to do the complete hardware while they develop their own software. We also have our own software. This is another area we believe where we can provide a lot of support and solutions.

ARAI has been in the lead with its knowhow of charging stations and have been making them. Charging station licenses have been sold to various people, who are putting up their prototypes, while we approve the final product. This indigenisation effort is also going up in a big way.

Is the charging station designed by ARAI ready for commercialisation?
Yes, one manufacturer has now got it approved. While that is a basic one, there are other versions to come up in due course of time.

You come from the oil industry background, with nearly 30 years there. What do you think about the prospects of hydrogen in the automotive industry? Hydrogen of late is re-emerging as a key topic of discussion in the industry.
You have rightly mentioned about it because recently in the Prime Minister’s address on 15th August, he put hydrogen in real focus. We are very focused on the hydrogen road map. The journey started way back, around 2005-06, when the National Hydrogen Board was set up and a corpus fund, from oil companies along with OIDB (Oil Industry Directorate Board), with Rs 100 crore for the R&D setup. Serious efforts were made at the time but initially to see whether it can be utilised as a blend as a fuel. The initial efforts (of blending) were made into CNG at that time. Certain companies and organisations took the neat hydrogen route, particularly for three-wheelers. But then there was a lull.

Around a couple of years ago, since the main issue was handling of neat hydrogen, the challenges were competency, technology and the hardware needed. My previous firm had converted CNG to H-CNG and no separate handling of hydrogen was needed. You can send in CNG and get out H-CNG with 18 percent (blend).

There are quite positive results. At the 2021 SIAM Convention, Mr Nitin Gadkari said that H-CNG can be a good fuel in the future. There is clearly a reduction in pollution, which has been noticed in the trials and tests. At ARAI, we have conducted some tests with H-CNG and certified that the evaluation results were provided to Indian Oil Corporation. We look forward for that . . . it will be a good change and a good step.

Carbon neutrality is the new global theme. Do you think industry can take a multi-pronged approach towards clean mobility and need not apply only a single technology like battery EVs?
Yes, because they have to co-exist as of now. There is not going to be one solution that is going to meet all — this is very clear. It has to be done in a phased manner.

The government is also very focused on carbon neutrality, which is why the scrappage and end of life vehicle policy was introduced. As the policy matures, there will be more built into it specifying what materials should go in when a vehicle is being built so that the end of life vehicle and the carbon neutrality will also be taken into consideration.

Coming to the fuel part, we need to address not only the fuel dispensing and the fuel carbon intensity but the energy production itself. The complete ‘well-to-wheel’ or ‘cradle-to-grave’ sort of a thing, to meet the complete requirement of net zero emission. I think that will be the next step because when the ecosystem starts developing you can always start addressing the other end also. A very focused approach to that also is happening on various fronts. Can existing coal can be used for some other source of fuel to be converted? There are studies underway.

Given conventional fossil fuels (diesel and petrol), battery electric, hydrogen or H-CNG, and maybe synthetic fuels too, what prospects you see for each of these?
It is not going to be an easy solution or an easy roadmap for vehicle manufacturers as of now. The struggle to achieve commercial viability in each of these can only be in a phased or step-wise manner because IC engines have existed for long. Over the years, the ICE ecosystem has grown in its efficiency — if it’s made technology agnostic, it can still give other fuels a fight.

So, I was very happy to hear industry (at the SIAM convention) speaking about that. Define the norms, then move ahead and see how we compete in pricing, availability et al. But the push that is coming and the government’s view and thought process are very clear — decarbonise the sector. Mr Gadkari was very outspoken in saying that OEMs should discourage diesel vehicle sales and focus on alternate fuels.

We need to adopt the new technologies that are coming in. The EV bucket is looking like the most readily available. The need of the hour is the coming together of corporates or organisations because you need economies of scale and synergy built in. Technology solutions are readily available. The only thing is the stakeholders need to come together.

The Ministry of Heavy Industries has recently given six of its agencies plans for start-up portals to be launched by them. Particularly for us (Technovus platform by ARAI) and one of our counterparts, they have told us to put on automotive- related areas. We have now made certain problem statements in areas like battery management systems and flex fuels — this is open for the next month. Those who have ideas on these fields can connect with us and we will do the handholding.

At SIAT 2021, which opens on September 29, redefining mobility is the theme. Do you foresee significant change or a lot of action happening over the next five years?
I am quite happy to say that we really have got a good response to SIAT. Initially, we were somewhat apprehensive about a complete virtual conference but we are almost full with the papers. There is a virtual expo being held concurrently.

When it comes to redefining mobility, it is the change happening particularly on the EV side. That is going to be maintained and it means growth is going to take place in a big way in this sector.

Meanwhile, the IC engine is not going to go down. You won’t see obsolescence so fast because our ecosystem is not ready to cater to the full need of EVs as of now. At least for the next decade, IC engine vehicles will still be predominant while EVs catch up. And then there’s the government’s push. It has been increasing the duration of the FAME scheme. How long the government does the handholding has to be seen. Likewise, many states have been incentivising EVs . . . how long they can continue doing so also remains to be seen.

So, clearly these are challenging times. Whoever gets onboard faster is going to reap much greater benefits. That is where the real drive is happening. We have seen that companies with a lot of agility and smaller players can respond much faster. Unknown names have cropped up and they have made a huge impact.