‘India’s rural markets are very important for the future.’ 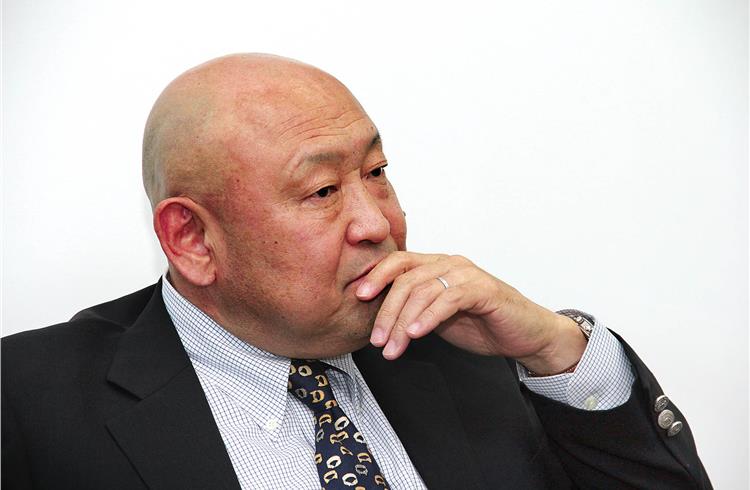 You came a year ago to India from an emerging market like Vietnam. How are you leveraging that experience for increasing Yamaha’s sales volumes in India? What are the synergies in these markets?
I was president of Yamaha Motor Vietnam from 2007 to 2012. Compared to the Indian market, the size and volume of motorcycles there is completely different; in Vietnam, the total two-wheeler market was 3 million at that time but in India it is now 15 million. Also in our 10-year history in Vietnam, Yamaha had already reached a nearly 30 percent market share.
When I came to India last
year, our market share was around 2.5-3 percent. Also, in Vietnam, our big competitors were Japanese makers like Honda and Suzuki so we were No. 2 there. But India has a huge two-wheeler market and our competitors are not only Japanese manufacturers but also very fantastic Indian bike makers. Customer usage and models are also completely different.
So even though I have experience in Vietnam and in Europe, in India I had to completely change my thinking first. I am watching the Indian market closely. Though the basic style of marketing is the same in both the geographies, the feel is completely different for which I have to first study the Indian market.
In terms of synergies, in Vietnam motorcycles are widely used for daily work and as a lifestyle product as are motorcycles and scooters in India. In Vietnam 110cc, 125cc scooters, step-throughs and commuter motorcycles are almost the same as those in Indonesia and Thailand. Similarly in India, there are street, commuter bikes and scooters but no step-throughs.

Central and South America are seeing considerable investment from companies like Hero MotoCorp. Does Yamaha plan to increase exports to these countries from India?
This year we have a target to export around 200,000 units and we already export to South America (Columbia and Argentina). We will increase volumes further if we have a request for it.

Hero MotoCorp is expanding its footprint in Latin America by setting up assembly plants there. Does Yamaha have similar plans?
Before I moved to Vietnam, I was staying in Japan at the time and was responsible for the Central and South American markets – mainly Brazil, Mexico, Argentina and Columbia – between 2003 and end-2006.
In South America, I noticed that some of the models that were being networked were of Bajaj and Hero but they were not so aggressive at that time. But now Hero and Bajaj are very aggressive in their exports to Central and South America.
In future the entire Africa market – not only south but central and west – will be very important for the motorcycle business, not only for Japanese manufacturers but also for Indian manufacturers.

Yamaha's new R&D centre in Chennai is slated to be operational next year. Will it cater to the company’s global requirements and does Yamaha have a plan to develop India as a low-cost hub for scooters for emerging markets?
Of course, Yamaha Motor Research & Development India (YMRI) and my company cooperate with each other but they are more focused on developing models and I am more focused on how to sell the models. We are contributing our inputs to the local R&D team in addition to what they are planning to develop themselves – but we need more commuter and scooter models and also big bikes for the future. The new models will depend on customer needs, so based on that they are also considering developing models for the future.
I don’t know about the R&D centre at Chennai but surely Chennai’s new factory will start production with current models. The Alpha scooter will be made at both Surajpur and Chennai and maybe the first motorcycle will be the FZ model.

We understand that Yamaha is looking at exporting scooters from Chennai…
Scooters will be concentrated in the domestic market but maybe exported to South America as well.

Is Yamaha looking to set up an all-women assembly line at the Chennai plant, similar to the one at Surajpur?
I think so but don’t know for sure. However, we have planned to employ some women at Chennai. We do hope and want an all-women line here but it is not yet fixed as manufacturing is taken up by a different company. But we are focused on women, so maybe the same concept will be followed at Chennai.

What are the challenges to growth in Southern India and what is your strategy to overcome them?
My concept is for India where our market share is under three percent. Of course, we want to sell more motorcycles and scooters here but we also want to approach the lack of awareness of the brand image. That is our strategy of introducing what the Yamaha brand is all over India to customers and increase the brand presence.

In 2013-14, Yamaha’s domestic sales totalled 484,492 units (up 33 percent) and exports 194,764 (up 46 percent). What are your expectations for 2014-15 especially as Yamaha is targeting 200,000 unit sales of the Alpha scooter and 100,000 units of the Ray and Ray Z cumulatively. Do you think you will be able to achieve this target?
I think this target is not so easy to achieve because we introduced the Ray and Ray Z in September 2012 and 2013 respectively and the Alpha this February. Even though Yamaha is present worldwide and is the global No. 2, in India we are No. 5 with a market share of 3 percent.
Frankly, in India, no one understands what Yamaha really is and what the Alpha scooter is, which is why we have benchmarked on how to increase sales but it is not so easy to achieve this. What is more important is how to approach the customer, how to sell the products and that is what I want to concentrate on, zone by zone.

Has Yamaha’s new mascot Zippy helped?
Yamaha is not such a famous brand in India. There are so many traffic accidents in India caused by bikes and scooters. Our policy is not only about selling bikes but also seeing that people use motorcycles and scooters for riding safely. The Indian user enjoys riding scooters but safety is also very important. Two years ago, we realised that women riding with kids was very dangerous, so we immediately considered safety riding. That is why we introduced Zippy.

Yamaha is looking, like Honda, to equal its sales contribution in India from its bike and scooter portfolio. Is this possible this year, and how?
Surely based on current demand, sales will definitely increase in the commuter bike and scooter segments. Yamaha has just entered the scooter segment in India, so we will have more increase in sales but how much is the question. Honda has a 10-year history in India while we have been here for just a short period.

Yamaha showcased the India-bound, liquid-cooled, parallel-twin, fuel-injected 250cc R25 at the Delhi Auto Expo. Given that Honda, Kawasaki, Royal Enfield and Harley-Davidson are already developing India-specific 250cc bikes, do you plan to introduce this 250cc bike faster into the Indian market?
We have a history of first introducing the R15, then the FZ 150, and then commuter bikes and scooters. So we are now concentrating on these categories. In future we can increase the 250cc, 500cc and 600cc premium category but I cannot forecast for the big-horsepower bikes because my focus is on selling the 150cc model.
Due to an increase in spending power, many customers want to buy higher-displacement bikes. We are looking at 600,000 units in the domestic market and should be somewhere close to it. About 200,000 to 225,000 units will come from exports. We are not present in the 100cc segment and deluxe constitutes 17-18 percent so we will maintain it or increase it.
We started at 4 percent in scooters last year and are now at 6 percent market share; we should maintain it and get an additional 1-2 percent. We are increasing our numbers in the categories we are present in and that will affect market share. Only one percent know the Yamaha brand in rural India.

Are you rejigging the focus on Tier 2 and Tier 3 cities?
Rural markets are very important for the future. For the Honda Activa, it is easy to enter rural markets because they are selling in A and B cities but for Yamaha how many people know it in A and B cities? So we have to first focus more on these cities.
We have also introduced our approach to people living in rural areas with the Alpha and FZ. We also have Yamaha Bike Corners in rural areas and will continue to expand them.

How do you view the proposals of the 2014-15 Union Budget?
Positive on sales, not only of bikes but also cars.