‘Consistent rise in GDP, a stable government and growth potential helped us decide to make in India.’ 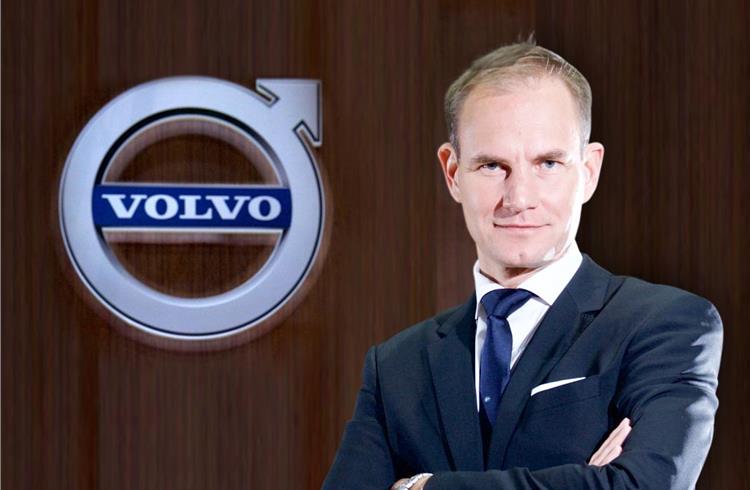 Volvo took almost 10 years to finally decide that it should start assembling its cars in India. What took Volvo so long?Yes, we have been in India since 2007.  We had a fair understanding that we needed to have local assembly operations in India for quite some time now because of the taxes. Additionally, Maharashtra and Gujarat have higher registration tax for CBU cars and, of course, there’s the drive by the government to push for local assembly, which is now stronger during the Narendra Modi period. So I believe the company has known this for quite some time.

Further, I think this also has to do with how we see volumes growing in future, how our business has been here throughout the years. The ultimate reason that we are now entering India is simply the way the government looks at the Indian economy, which is recording 7.5 percent growth in its GDP year-on-year. This growth has been consistent for some time now. There’s also the stability of the government, which is expected to serve another term at the Centre because it is so strong.

Volvo, which has brought in the XC90 SUV and S90 sedan, has registered good growth over the past two years. We are seeing good growth this year and probably also in the years to come. When we put all those factors together, I think, the management in Sweden felt comfortable about the growth prospects in India.

So political and economic stability played a key role in ensuring Volvo invests and assembles its cars in India?
We need to understand that the management is now confident about India. We believe that there is strong, sustainable growth. I think it’s very much a confidence-inspiring question for the local and global management (to set up assembly operations in India). We have the confidence in being able to grow in India.

India levies 120 percent import duty on CBU cars and roughly half of that (60 percent) on import of CKD cars. Have you figured the correction in the prices of the models to be locally assembled here?
We have had quite an aggressive pricing in the market, because we believe that there is no use of being in India and price our cars, let’s say, 20 percent above the competition. We have (priced and) sold our cars based on our international pricing strategy, which is to be on the same level as the German competition. That’s what we have done until now and that’s what we will continue to do also after this. We don’t plan to change the price of the XC90 when local assembly will begin (later this year).

Does this mean that Volvo has been absorbing the taxes earlier? Did the company make profits last year in India?
Last year we did not lose money, which of course is good news.

Volvo Auto India sold close to 1,600 cars in CY2016 and claims to have a 5 percent share in the premium car market. While you plan to double your market share by 2020, what are your projections for the premium car market size and Volvo’s annual sales target by then?
We sold 1,584 cars last year. I want to have a 10 percent share of this market in 2020, which I think is a fairly realistic target. Some people say that this is too easy. We are seeing a good response to the XC90 and S90. We plan to get the V90 Cross Country later this year, followed by the XC60 and some other nice cars after that too. So the product portfolio in India is going to be in very good shape.

This is aligned with our strategy of opening up new showrooms. We plan to have a total of 25 showrooms by the end of this year. This will be backed by our local assembly operations and some marketing strategies.

Forecasting the size of the premium car market in India is difficult. In the last 10 years (at Volvo), all forecasts about this segment have been wrong! I can only guess, and this is subject to change as per the market scenario. In in 2016, the premium car market was around 32,000- 35,000 units, it could get to 40,000 units this year and may be 50,000 units in 2020. By then, we could be selling around 5,000 cars. But all these calculations depend on macroeconomic factors;  for example, we had to deal with demonetisation recently.

Will the upcoming assembly line have enough capacity to cater to the company’s 2020 projections?
That’s the idea. The setup should help us double our market share in India.

What is the arrangement between Volvo Auto India and Volvo Trucks India when it comes to using the latter’s plant near Bangalore to assemble cars? Are there any synergies going forward?
Volvo Group and Volvo Car Corporation are two completely separate companies. Volvo Group is a Swedish company, which manufactures trucks, buses, construction equipment and marine engines. It is a listed company on Sweden’s stock exchange.

The Volvo Car Group is owned by Geely Holding of China. The only common link between the two companies is Volvo Trademark Holding AB, which manages the brand name in common. (Volvo Trademark Holding AB was established in 1999, after Geely acquired Volvo Cars, to deal with branding for both the companies.) This (alliance in India for car assembly) is actually the first alliance with them (globally) in so many years (after Geely’s acquisition of Volvo Cars.)

I will have to disappoint you as I can’t really disclose any details on the production side.

Will Volvo Auto India pay royalty to Volvo Trucks for using its plant to assemble cars?
There are two things here: firstly, we will have to ensure that the cars that come out of that plant are in line with our global quality benchmarks.

Secondly, it was known that we were looking for partners in India for contract manufacturing or a similar assembly setup. We just found out that Volvo Group India’s setup is very good for us. We are quite happy about the fact that we will be able to use their infrastructure and licenses they have. We think that with the current volume and with the projections that we have for the next few years, this is the best solution.

One in every four cars sold in India is an SUV. What is your outlook on the rising demand of this specific category, given that the first car you plan to assemble locally is also an SUV?

The craze for SUVs in India is good and it is proven. The XC90 was our best-selling model last year. This year it is going to compete neck-to-neck with the S90 in terms of sales for us. It (XC90) is from Volvo’s SPA platform. So it is quite natural that we start off (local assembly operations) with the most popular and latest car.

Is Volvo Auto India beginning to build its team and expand headcount to take on its assembly plans in Bangalore?
Our current office is based in Gurgaon and we do not have any plans of shifting our base. When it comes to the organisation down south in Bangalore, I can’t really comment on that. All I can say that we will ensure that the (locally assembled) cars match Volvo’s global quality standards.

How is the response to the S60 Polestar in India? How many units are you expecting to sell this year?
We have received a very good response to this model. The price is very aggressive, as we don’t want to have a performance car in a price range that nobody buys. It’s a performance car, which means that it is not for everybody. The initial reaction has been very good. We expect to sell 30 cars this year and our Bangalore and Chennai dealerships are very enthusiastic.

Dealers are closer to customers. What inputs do they give you?
The first time I set foot in India, the first question I was asked was when would Volvo start local assembly of its cars in India. I have been asked the same question very often and finally I have the answer.

It’s not that when you have a plan, you suddenly start selling a lot of cars. It’s more about the confidence with dealers, customers, authorities and with the press as well that we are here to stay. When you have an industrial footprint, it backs the confidence of the dealers who want to see the big investments in facilities and understand that the company is really backing them up.

Now they have the feeling that the global CEO has trust in India and has approved the local assembly operations. They feel very good about this.

Among other things they ask is to ensure that we build the brand in a structured manner with investments in marketing and simultaneously expand the retail network. They say that customers need to have the confidence that wherever they go, they get brand service and credibility around the country. Of course, they ask for bringing in the right products for India. I think, so far, we have managed to this quite well. We are launching all the new cars as soon as we can here.

So to summarise, they ask for local assembly, the right products, investments into marketing and a larger network. We plan to have close to 25 dealerships by the end of this year.

Car safety norms in India are all set to evolve very soon with well-defined benchmarks and star-ratings under Bharat NCAP. Given that Volvo cars are understood to be the safest cars in the world, and Indian buyers are increasingly becoming aware of safety features, how do you see the progress?
I think this progress in India goes very well with Volvo’s brand positioning and perception. The country has more than 150,000 road fatalities (every year), although not all are connected to car crashes. We would love to connect (and back) India’s push for safe infrastructure, road discipline and Volvo cars. If this together can push the road safety consciousness forward, then it is welcome.

It should be made sure that people understand that it is important to always wear seatbelts, even the rear passengers should, and many similar points. These things alone can save many lives. There is a lot that needs to be done. If we are of any help, we will be happy to do that. If we can learn something new, that will be welcome too.

The Central Government’s think-tank, Niti Aayog, has prepared a draft on India’s new mobility policy which sees a 15-year roadmap (2017-2032). The government is keenly backing the transition to electrification of vehicles during this period. What is your outlook on a clear mobility roadmap such as this?
The government’s push (for cleaner fuel and less polluting cars) is a good thing. I live in New Delhi and I am aware of the air pollution issues there. Any effort in the direction of reducing pollution or improving air quality is welcome. The ambition, I think, is really good.

From our side, we will have a hybrid version of all our vehicles to come, and in 2019 we will launch Volvo’s first fully electric car. By 2025, Volvo Cars aims to sell one million electric vehicles globally. I hope we can sell as many as possible of those cars in India too.