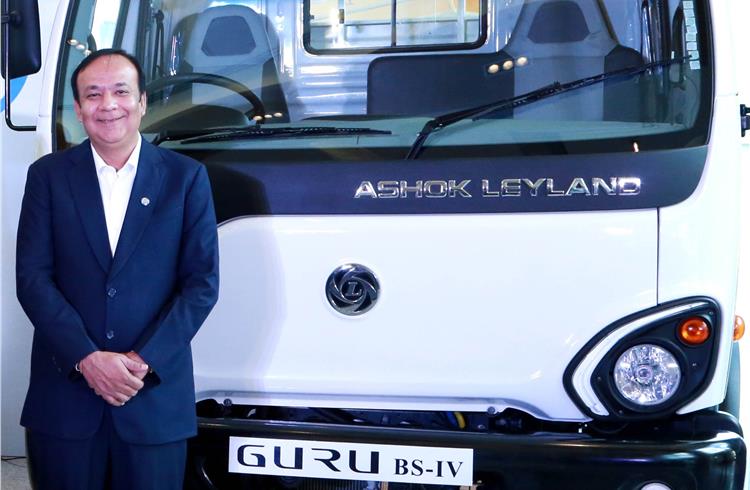 What is your outlook for the truck segment going forward?
If you look at the past 9 months, the truck segment has de-grown by 4-5 percent but we have maintained our volumes and thereby gained market share. The last quarter is always the best for the industry; this year too we expect it to be good, backed up by some kind of pre-buying. I don’t know how much of pre-buying will happen this time; we don’t want too much to take place because then it impacts the subsequent year.

The construction and mining sector is doing particularly well because of the government’s spending on infrastructure projects. As a result, we have seen huge demand in tippers, practically 50 percent better than last year. Multi-axle vehicles have seen the largest de-growth of close to 25 percent.

In the coming year, BS-IV vehicle prices will go up to compensate for the increase in the cost. The cost hike will vary from model to model, on the technology used, and from one OEM to another as the cost structure may be different. The costs will be different for OEMs employing Selective Catalytic Reduction (SCR) technology and Exhaust Gas Recirculation (EGR) technology. But definitely in both, there will be some price increase.

But the actual tweaking would have been completed in BS-IV engines by now?
Yes but the actual production will start from April 2017. We are using both technologies but which one to use, on which vehicle, is always going to provide us the competitive advantage. It is not only the size of the truck but the application whether it is off-highway or on-highway and also whether it is for long-distance usage.

What is the estimated price increase? Also, with safety norms around the corner, what will be its impact?
The price rise will be 5-10 percent. We had regulations like the ABS and Speed Limiting Device  coming in last year. There was also a notification that air-conditioning would become mandatory. There will be challenges around cost and price because of regulations. However, they are welcome  especially if they improve the on-road safety of the vehicle and also enhance driver life. But there is only so much the industry can absorb, the rest will have to be faced by the consumers.

What is Ashok Leyland doing in terms of modernisation of the truck segment?
We always undertake continuous improvements to keep our products contemporary. The improvements are centered around reliability, performance, driver comfort and safety.

Performance would mean better fuel efficiency, better tyre life and reliability which would mean a better life for the aggregates and longer service intervals. This has now risen from 10,000km to 80,000km with technology and use of higher grades of oils.

Ashok Leyland plans to one new model every quarter in the LCV segment. Will this strategy be replicated in the truck segment as well?
In the LCV segment, we have the Dost and the Partner in trucks and the Mitr in buses, so there is huge headroom. In Intermediate commercial vehicles (ICVs) and M&HCVs, we have products that cover almost the entire portfolio. We will continuously add variants and are also looking at fully built solutions. Quite a bit of our sales today are of the cowl chassis where we don’t mount the body. In tippers, we are doing almost 100 percent but when it comes to multi-axle vehicles or tractor-trailers we only give the tractor and not the trailer albeit there are increasing requests from customers for fully built solutions.

As such, we will be working more and more on applications to offer our customers a ready-to-use product that helps them. Earlier, customers went to the unorganised sector for building the vehicle body. They have now realised the benefits of being with the organised sector where they get better quality and reliability and even the ‘super structure’ as we call it. So there will be a lot of emphasis on churning out fully built vehicles.

Which new products do we see in the M&HCV category?
We currently make a generic chassis – we don’t give a refrigerated container or a dry container which is becoming very popular in the white goods or e-commerce industry. We will be getting more into these customer applications, which can be classified as variants or new products.

We will be rolling out BS-IV variants every month.  About 75 percent of the company’s turnover is contributed by the truck division.

What about hybrids and electrics?
We launched the electric Circuit bus which will see broad usage. The initial usage is being experimented and seeded. Commercial usage is a factor of how quickly can we make it cost effective and also the eagerness of the environment to adopt and how regulations support it. A number of countries have gone from diesel to hybrids and then electrics. There has been a lot of incentivisation either by the government or industry and that makes it affordable. In the Indian context, this technology is still not affordable but we are sure that it will change very quickly.

Many companies are entering into lithium ion battery manufacturing. Will Ashok Leyland also be coming out with its own batteries to power electrics?
We have always been the leader as far as bringing in technology and adopting new technology is concerned. I don’t think we will ever lose that position. We are working towards that and when the environment is ready for that, we will definitely bring them.

Is Ashok Leyland developing any new series of engines?
We have the H-Series and the 4-cylinder, 6-cylinder and now the 3-cylinder engines. We also have the Neptune platform that will be good enough to make it compliant to BS-VI emissions.

How much work will be required to make engines BS-VI compliant?
As far as BS-VI is concerned, we can make do with our Neptune engines. But as our endeavour is to harness indigenised technology, there is some work to be done to make it more suited for Indian operating conditions.

How much investment will go into tweaking the engines for BS-VI?
Nothing very big. Yes, there would be some investment required for the technology to enhance the manufacturing capacity of these engines. For the Guru ICV (pictured below), we spent Rs 30- 40 crore. We always go for an approach where we don’t have to make huge dedicated investments as they are all part of the same family and we try to keep it in a way that is manageable. 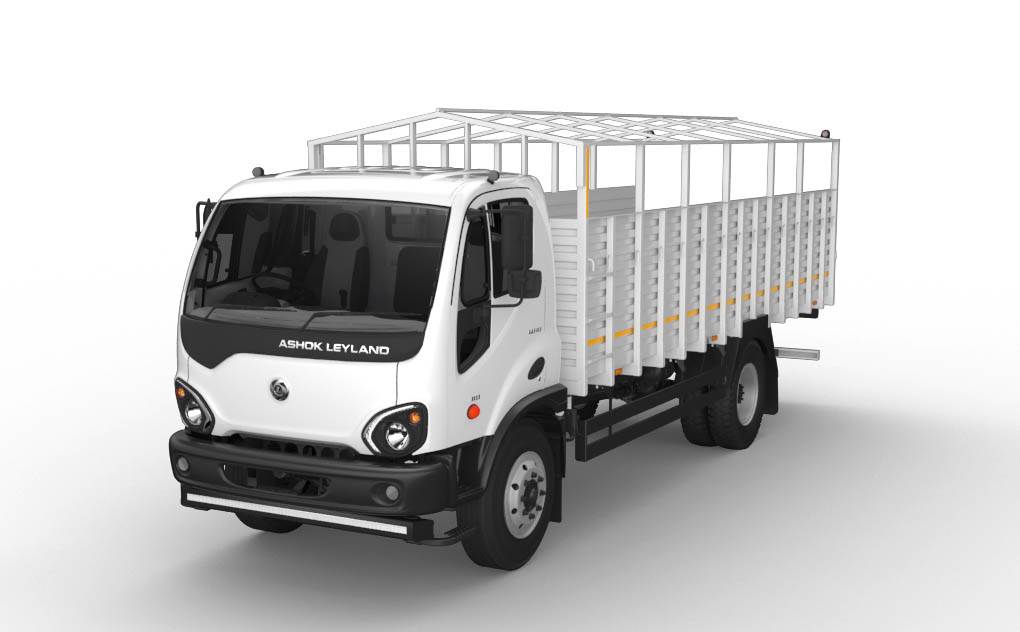 What is the USP of the recently launched Guru and Partner?
It is ‘Business Ka Naya Andaaz’. They give the best fuel economy and payload so the owner can earn, as per our estimates, Rs 800,000 more over a five-year period. They are also hugely reliable – the vehicles have aggregates that have been extensively tested for 12 lakh kilometres. They will not break down on road and not go off the route, which gives comfort and safety to the driver.

We have already handed over 50 vehicles in Chennai, 20 in Coimbatore and 25 vehicles in Delhi. Earlier, we had sold out around 40 vehicles. That number is changing as we speak. We have a lot of apps and are embracing the digital world in a big way. Our sales team has a product configurator on a tablet that enables them to configure a vehicle as per customer requirement, after which it gets booked into the system.

Has Ashok Leyland been affected by the demonetisation effect?
Everybody was and our industry also took a beating but that was more in November 2016. We recovered partially in December and January was still better.

How are global markets performing and how is the export push in terms of trucks?
The export market is almost the same as last year. Bangladesh has been good as it was last year and even better this year. Other markets where there are projected orders are East and West Africa but Gulf countries are a little down in orders for buses. The Gulf economy has been slowing down because oil prices are under pressure. We continue to hold onto the markets that we had planned.

Exports this year, like in 2016, will comprise 15 percent of our overall sales. We export a lot of 11-metre and 12-metre buses and also trucks like the 4x2 16Tonner to Bangladesh where we are doing good volumes. Other products like the Boss and the Captain are being showcased and trialled into new markets, so we will have a full range going forward. Buses and tippers though will take the lead. 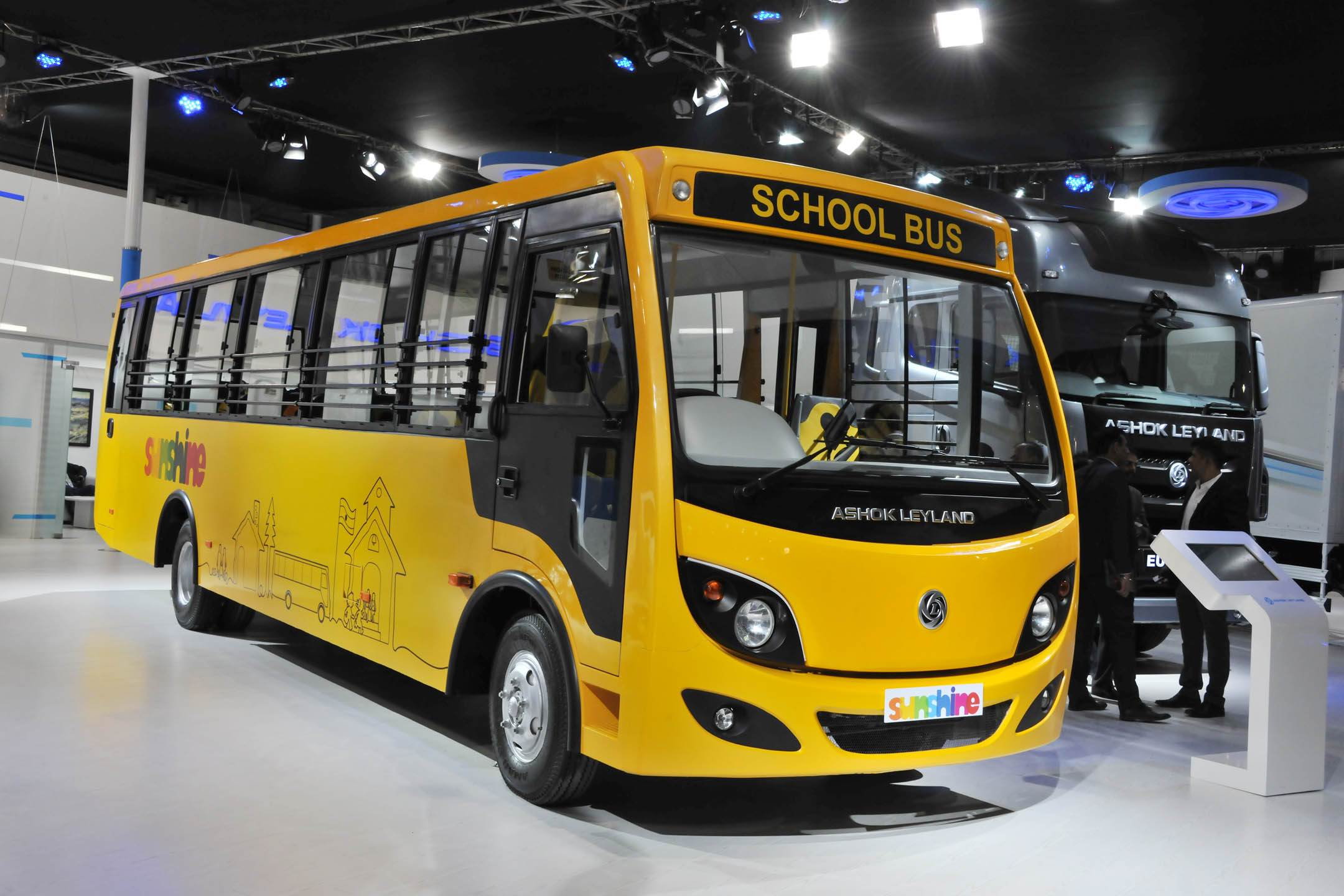 Recently we got a new product for the Gulf market – the Oyster school bus that holds sway in terms of technology, safety and comfort. Similarly we have the Sunshine (pictured above) for the Indian market.