At Rs 63.50 a kg, CNG turns costlier by 22% in three months; PV and 3W OEMs which are seeing strong demand could be impacted in the long term 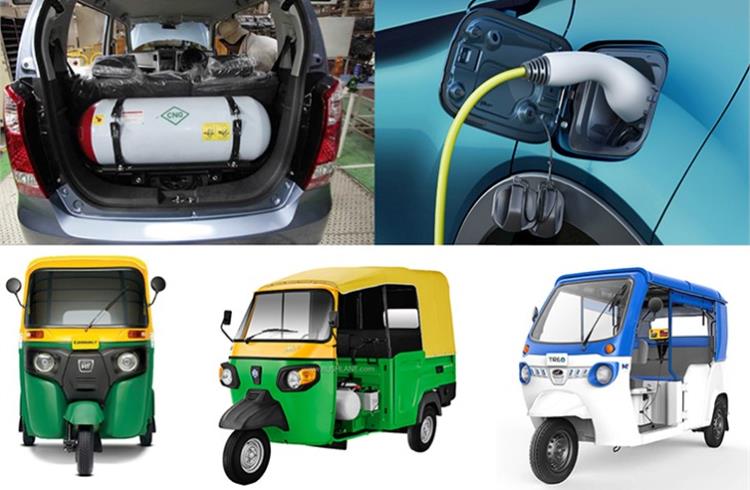 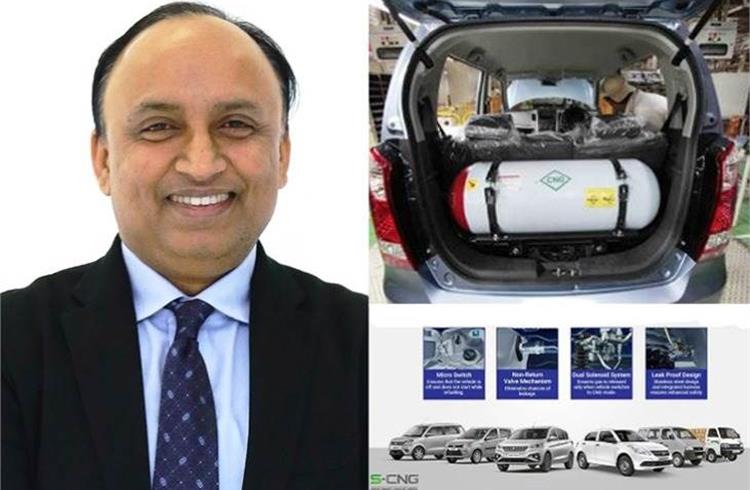 Maruti Suzuki India's Shashank Srivastava: "While the road to EVs will be electrification through scale up of hybrids and other technologies, CNG shall continue to increase its presence in the market and be a key differentiator for us.”

The continuing price increase in CNG, even as petrol and diesel prices have remained unchanged  since the November 4 excise duty cut is now becoming a cause of concern both for CNG vehicle users as well as CNG vehicle manufacturers. Billed as an eco-friendly and cheaper alternative to fossil fuels, CNG is now Rs 46.48 cheaper than a petrol litre (Rs 109.98) and Rs 30.64 cheaper than a diesel litre (Rs 94.14).

It is understood that the hikes are due to Mahanagar Gas sourcing additional market-priced natural gas to meet growing demand of the CNG and PNG (piped natural gas) market in India. Also, global prices of natural gas have increased. Nonetheless, continued upward price movement could see demand for CNG vehicles, which has been recording a smart upswing, could move to electric vehicles, thereby impacting the CNG market whose market share has grown sizeably in the fist eight months of FY2022.

Maruti and Hyundai reap first-mover gains
As a result of sky-high petrol and diesel prices, and the high initial cost of EVs, both passenger vehicle and three-wheeler segments have benefited from consumer demand for CNG-powered vehicles. A glance at the data table for PV and three-wheeler sales above reveals just that.

The much-improved performance of all three sub-segments is amply seen in the growing CNG market share in the PV segment: cars to 9.87%, UVs to 3.50% and vans to 24%. Overall, the CNG share in the PV market has grown to 7.50% from 6% a year ago.

Hyundai Motor India, with 4 models – Grand 10, Santro, Aura and Xcent – has sold 25,898 units in the period under review and posted 130% YoY growth, albeit on a low year-ago base. Tata Motors, which is on a roll in the PV segment, doesn’t have a CNG vehicle in its portfolio yet. But its entry into the CNG segment is imminent.  In fact, Autocar India has revealed earlier today that some Tata Motors dealerships have begun accepting unofficial bookings for the CNG-powered Tiago and Tigor.

Sustained growth for CNG commercial vehicles
Like their PV brethren, demand is up for CNG-powered CVs, particularly three-wheelers. The first 8 months of FY2022 saw 67,927 units being sold, marking 45% YoY growth but on a low-year ago base of 16,407 units. Importantly, the share of CNG three-wheelers has grown three-fold across the fuel mix of petrol, diesel and electric – to 45.40% from 14.90% a year ago. 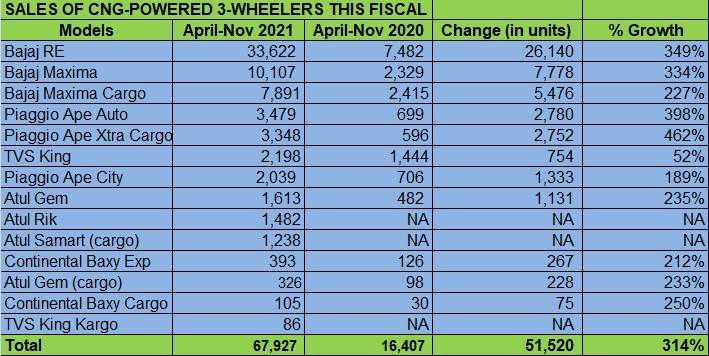 Will rising CNG prices drive consumers towards EVs?
While it is difficult to say whether CNG prices will keep moving upwards, given the growing demand for the fuel in India both for motoring and household usage, the fact remains that CNG vehicle running costs are significantly lower compared to petrol or diesel as a CNG vehicle inherently gives better fuel economy.

A few challenges remain though. Refuelling takes longer due to a fewer number of CNG stations and highway driving requires additional planning in terms of trying to take a route with a CNG station.

PV and three-wheeler buyers now have another option – electric vehicles. While the initial cost of an EV is higher than a CNG or petrol/diesel model, the much lower cost of vehicle ownership in the long run is very attractive. With the Central and state governments offering a host of subsidies, the fast-expanding EV charging infrastructure and also banks and financing institutions plugging into the EV sector, it is likely the CNG sector's loss could be the EV segment's gain. But Maruti Suzuki India has a different point of view, and is well placed to further accelerate its dominance in the CNG four-wheeler market. In fact, the Maruti Brezza and Nexa range could get the CNG option soon 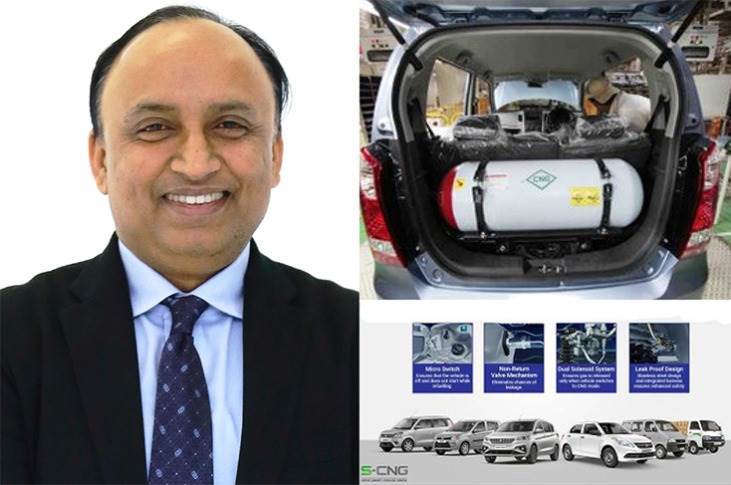 Maruti Suzuki India's Shashank Srivastava: “While the road to EVs will be electrification through scale up of hybrids and other technologies, CNG shall continue to increase its presence in the market and be a key differentiator for us.”

CNG car market leader Maruti Suzuki is undeterred by the CNG price hikes. Commenting on the subject, Shashank Srivastava, Senior Executive Director, Marketing & Sales, Maruti Suzuki India says: “When we talk about different fuel alternatives, it’s important to look at them from a holistic perspective. In the face of rising fuel prices, now more than ever and with the gap between the price of petrol and diesel closing in (weighted industry average of the price difference between petrol and diesel, is just under five rupees), the tilt in favour of CNG is natural. With EVs, consumers may be faced with challenges such as lack of infrastructure, range anxiety and cost of acquisition.”

He added, “What’s more, CNG as we are observing has risen as a viable clean fuel alternative and is gaining a lot of momentum in the mainstream market. The key reasons for this are, ‘affordability and availability’. When we consider the cost of acquisition and maintenance, CNG rises as one of the most feasible and economical clean fuel alternatives in India. It is evident that Government is boosting diverse avenues of clean fuel alternatives. With the government’s focus, there is a visible increase in CNG stations across the country. We have already sold over 150,000 CNG vehicles last year, we are aiming at around 250,000 sales target this year. At present out of 280,000 pending bookings for Maruti Suzuki cars, nearly 120,000 are for CNG vehicles. We believe that going forward, while the road to EVs will be electrification through scale up of hybrids and other technologies, CNG shall continue to increase its presence in the market and be a key differentiator for us.”

EV OEMs understandably bullish
EV makers are pleased with the CNG price increase. Mahindra Electric said that the rise in CNG prices augurs well for the electric three-wheeler segment in market which have a developing EV charging ecosystem.

According to Deepak MV, co-founder and CEO, Etrio, “The recent increase in CNG prices will further accelerate EV adoption in India. The increase is nearly 25-30%, which further increases the advantages of operating cost of EVs over CNG vehicles and makes electrification in mobility a bigger reality in times to go.”

Uday Narang, founder and chairman, Omega Seiki Mobility said, “Given the rising prices of CNG in India, EVs are the most viable alternative to the ICE engine. CNG vehicles, which were initially considered to be both environment- and pocket-friendly alternatives, are now experiencing growing ownership costs. EVs are seen to have many advantages such as the ownership cost, which is nearly half of what CNG vehicles cost, lower service cost and close-to-nil NVH levels of EVs making them more attractive compared to CNG vehicles. Hence being the cheaper fuel option, economical service and increased ease of use makes EVs more sustainable compared to other options available.”

(With inputs from Mayank Dhingra and Nilesh Wadhwa)