What has helped the Seltos cut through India's UV market is Kia's ability to match production with demand and a sound marketing strategy of offering multiple engines, multiple gearboxes, multiple variants and at multiple price points. 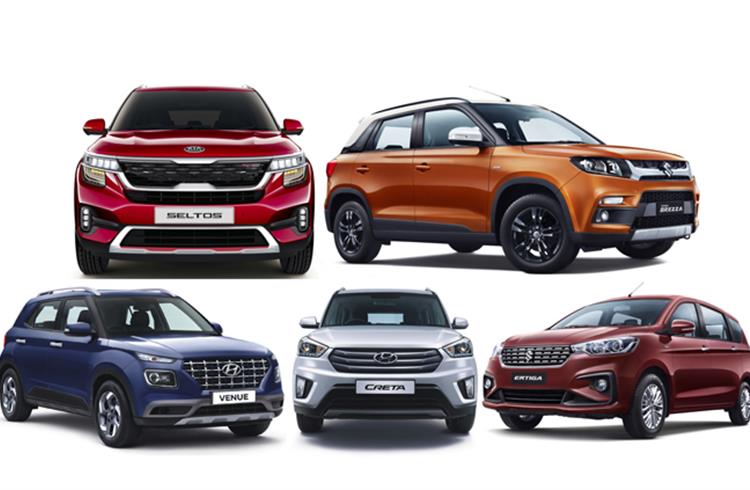 The Kia Seltos is the new utility vehicle (UV) market leader in India. And it wrests the UV crown in just three months of its launch on August 22. With 12,786 units to its credit in October 2019, the Seltos has breezed ahead of the competition, leaving the market leader Maruti Vitara Brezza trailing by 2,559 units.

To be honest, there were all the indications that the Seltos was headed this way. Right from launch, the Seltos has seen month on month growth – 6,236 units in August, 7,554 units in September and 12,786 units in October. Cumulatively, the three months add up to 26,576 units or a monthly average of 8,858 units. Interestingly, the petrol/diesel ratio for the Seltos is rather close at 51:49.

Very solid going for a new brand in the Indian market and a robust performance which gives Kia Motors India a 4.85% UV market share. What has helped the Seltos cut through India's UV market is Kia's ability to match production with demand and a sound marketing strategy of offering multiple engines, multiple gearboxes, multiple variants and at multiple price points.

Kia Motors India says it has received over 60,000 bookings for the Seltos till now and, to ensure timely deliveries, has started the second shift to ramp-up production at its manufacturing facility in Anantapur. The company says it will not close bookings as the plant is fully capable of meeting the rising demand for the Seltos.

What is helping the BS VI-compliant Seltos make headway in the competitive Indian SUV market is its very aggressive pricing. The Korean carmaker's pricing strategy for all of 16 variants covers virtually every price point and starts from Rs 969,000 (for the entry-level petrol Smartstream G1.5 HTE model) and goes up to Rs 15.99 lakh (for the diesel 1.5 CRDi HTX plus (6AT) and Petrol Smartstream 1.4 T – GDI GTX (7DCT) and GTX plus top-end variant). With this, it takes on rivals like the Hyundai Creta, MG Hector, Nissan Kicks, Mahindra XUV500 and the Renault Captur in India.

Maruti Vitara Brezza sells 10,227 units
Having wrested the crown back from the Hyundai Venue in September, the Maruti Vitara Brezza has just lost it to the Seltos in a span of 30 days. With sales of 10,227 units, the SUV has recorded its third-best monthly sales in the April-October period, following the 11,785 units in April and 10,362 units in September. The Brezz's cumulative sales in April-October 2019 are 62,437 units, down 34% year on year (April-October 2018: 94,869). The importance of the Brezza to Maruti can be gleaned from the fact that it accounts for 45% of the company's UV sales of 137,318 in April-October 2019.

The lack of a petrol engine amidst the growing consumer shift from diesel to petrol has impacted the Vitara Brezza adversely over the past year. Newer rivals like the Hyundai Venue and Mahindra XUV300, both of which are available with petrol engines, have not helped things either.

However, the Vitara Brezza will fight back with a petrol engine under the hood. Maruti Suzuki India has begun road testing the refreshed Vitara Brezza, which is likely to debut around the Auto Expo 2020 in February, exactly four years from the model's world premiere at Auto Expo 2016, in New Delhi. The upcoming Vitara Brezza petrol will replace the current diesel-powered model. The company had announced earlier this year that it will stop selling diesel cars from April 1, 2020, due to the upcoming BS VI emission norms.

Hyundai Venue now in third place
As a result of the hard-charging Seltos and an improved performance from the Vitara Brezza, the Hyundai Venue has been pushed to third place in the Top 5 UVs chart with despatches of 8,576 units. From launch on May 21 till end-October, the compact SUV has sold a total of 51,257 units comprising 21,531 diesel and 29,726 petrol variants, which makes for a 42:58 percent ratio and indicative of the consumer preference for petrol power in the domestic market. The Venue comes with three engine options – a 90hp, 1.4-litre diesel, an 83hp, 1.2-litre naturally aspirated petrol unit, and a 120hp, 1.0-litre turbocharged unit.

The Venue, Hyundai's first ever compact SUV, has given the company new heft in the UV market. Of Hyundai's total 106,366 UVs sold in April-October 2019, the Venue accounts for 48%. The company says it has around 75,000 bookings for the Venue, which means this is one model which will continue to be in the news.

Hyundai Creta stays at fourth
Once a longstanding No. 2 below the Brezza, demand for the Hyundai Creta has been impacted by newcomers like the Kia Seltos and sibling Hyundai Venue. With sales / despatches of 8,576 units in October, the Creta takes fourth place in the Top 5 UVs list, similar to its ranking in September. The October performance is better than September's 6,641 units, August's 6,001 units but a tad below July's 6,585 units.

Maruti Ertiga sells 7,197 units
The sole MPV in this list, the Maruti Ertiga takes fifth place with 7,197 units, better than the 6,284 units in September but more less than the 8,391 units in August. The Ertiga in its new avatar is seeing decent demand. With its modern design, ample space, thoughtful features and a value-for-money package, the new Ertiga is ticking most of the right boxes for family and fleet buyers.

UVs sole segment to shine in festive October
Take a close look at India Auto Inc's October 2019 market performance and the sole vehicle sub-segment that shines is utility vehicles (UVs). At 22.22% YoY growth (100,725 units), it not only accounts for 35.33% of total passenger vehicle sales (285,027 units) but importantly it is also the sole category to be in the black in the first seven months of the fiscal year to date (April-October 2019: 547,572 units / 0.14%). Here too, it constitutes 33 percent of overall PV sales in the seven-month period.

SUVs clearly are good news for the beleaguered Indian automobile industry, which has seen 11 straight months of overall sales decline, a trend which looks to continue till the fiscal year-end. The clutch of recently launched SUVs, all from global manufacturers, are playing a key role in the resurgence of demand for this vehicle type. Not surprisingly, their robust sales have resulted in their manufacturers expanding their UV market share, eating into established OEMs' share; this at a time when the chips are down for the rest of the industry. UV manufacturers will be hoping this trend stays strong through to 2020 and beyond.