With 56 percent of the total scooters sold in India in January 2019, Honda Motorcycle & Scooter India’s flagship product – the Activa – is beginning to take off again. 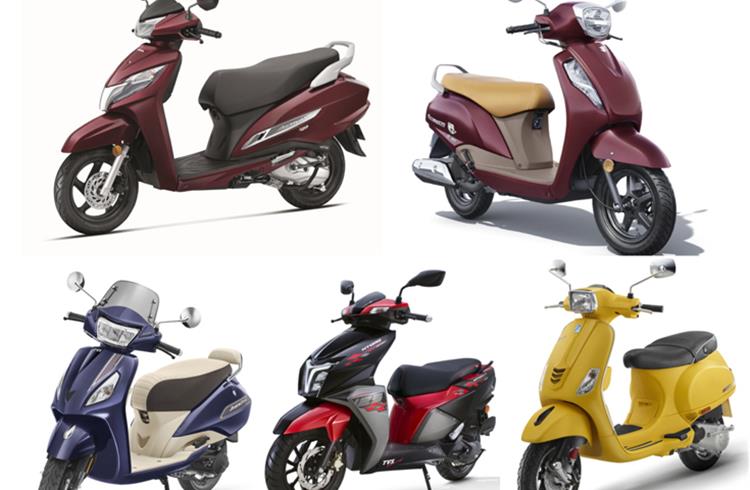 Nothing like a successful product which, along with new customers, also drives up market share. That's just what Suzuki Motorcycle India and TVS Motor Co are experiencing. Even though the overall scooter market is down 16.16 percent in the April 2019-January 2020 period to 4.8 million units (48,80,548), a million units down on year-ago figures (April 2018-January 2019 (58,21,294), these are the only two OEMs out of 8 scooter makers to have increased market share, at the expense of the others. And it's the scooters in the monthly Top 10 that help OEMs do that.

What helped accelerate the monthly sales was the launch of the BS VI-compliant version of the 110cc Activa. Called the Activa 6G, the scooter is available as a standard variant priced at Rs 63,912, and a Deluxe variant that costs Rs 65,412 (ex-showroom, Delhi). The new Activa 6G costs Rs 7,500 over its corresponding BS IV Activa 5G model.

The Activa 6G is the second BS VI 110cc scooter to be launched, after the TVS Jupiter Classic (Rs 67,911), joining a list of 125cc+ scooters that have made the switch to the more stringent emission norm.

The Access 125 clearly has proved to be a game-changing product and has brought Suzuki back into the scooter game. In fact, in January 2020, the Access has increased its leader over the TVS Jupiter. In December, the Access was ahead of the Jupiter was just 1,311 units; in January 2020, the gap has increased to 15,906 units. The Access sold a substantial 54,595 units last month, similar to its year-ago number of 54,524 units, which means traction is returning to the scooter market. In the Apri 2019-January 2020 period, the Access has sold a total of 494,319 units, up 12% YoY.

On January 6, the company launched the BS VI-compliant version, with prices starting from Rs 64,800 for the drum CBS and going up to Rs 69,500 for the disc CBS Special Edition. The upgraded BS VI Access 125 develops 8.7hp at 6750rpm and 10Nm of torque at 5500rpm. The power output remains unchanged as compared to the BS IV engine albeit torque figures have dropped marginally by 0.2Nm.

The 2020 Suzuki Access 125 continues to be all it has been, in addition to offering a few more features and being ‘greener’. It is priced on par with the Yamaha Fascino 125 that has a scantier features list and is a whole Rs 5,000 more affordable than the top-spec Activa 125. This special-edition, disc brake and alloy wheel-equipped version costs Rs 6,000 more than the BS IV version in the same spec, one of the lowest BS VI-related hikes yet. The Suzuki Access has always offered a little bit of everything you’d want from a scooter, and this new one continues to do just that.

On November 27, 2019, a day after it rolled out its first BS VI-compliant two-wheeler, the Apache RTR, TVS expanded its BS VI product range to its Jupiter, which is now equipped with ET-Fi (Ecothrust Fuel injection) technology. The BS-VI TVS Jupiter Classic ET-Fi is priced at Rs 67,911 (ex-showroom Delhi).

Launched in 2013, the Jupiter remains the best-selling TVS scooter and crossed the million-unit sales mark 30 months after launch. It has a customer base of over 3 million customers.  The TVS Jupiter is available in four variants – Base,   ZX (Disc and Drum), Classic and Grande.

These are the top three best-selling scooters in the Indian market. No major surprise in the other seven in this Top 10 list other than the Vespa – 110cc and 150cc – which has entered the best-sellers’ list for the first time. With 2,662 units to its name, the Vespa brand takes 10th position.

The scooter market, like the motorcycle market, is feeling the heat of the slowdown. In January 2020 as well as April-January 2020, sales are down 16% year on year. All OEMs are currently busy implementing the emission technology upgrade to BS VI, which has seen a 7-10% increase in costs. Will consumers take the price increase in their stride and will the tide turn in favour of OEMs? Keeping wathing this space for more.