Given the high year-ago base, weaker Q2 PV sales were expected while CVs continue to record healthy growth and scooter sales moderate. Challenges remain in the form of high fuel prices and rising insurance premiums. 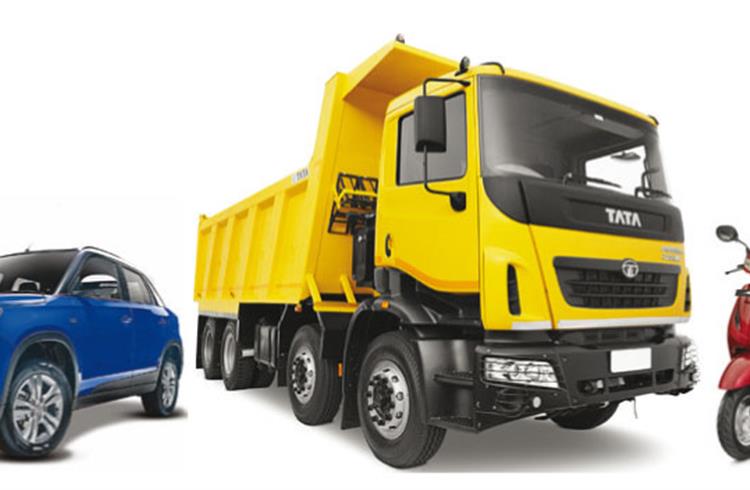 Even as economic factors such as a growing GDP, bountiful monsoon and a slew of infrastructural projects remain on the uptick, the Indian automotive industry, especially the passenger vehicle (PV) segment, still witnessed a rather slow second quarter (Q2), due to fuel prices rising stratospherically and importantly, a comparatively high year-ago base when sales were shooting through the roof on the back of GST-led tax benefits from July to September 2017.

Growth in the high-volume two-wheeler segment too saw a bit of dampening with scooters declining 2.91 percent with overall sales of 666,476 units and motorcycles saving the blushes for the two-wheeler OEMs with cumulative sales closing in at 1,360,414 units and growing a respectable 7.04 percent.

The Q2 results clearly depict a tapering-off performance caused by factors such as the high year-ago base due to GST implementation, as well as the advancement of the festive months in CY2017, when the auspicious Navratri ended in September itself.

"The industry saw a mixed performance in Q1 and now in Q2, we have seen the growth getting tapered off, firstly because of GST creating a high year-ago base, and also because the festive period spans across different months this year," said Rajan Wadhera, president, Automotive, Mahindra & Mahindra, and also the newly sworn-in president of SIAM.

While the passenger vehicle segment registered de-growth of 3.6 percent in Q2 between July and September, its performance over the first-half of the fiscal remained positive at 6.9 percent. While van sales recovered (+4%) with good availability of finance schemes, UVs slumped by 8 percent in the quarter. The UV-to-PV ratio, however, was maintained at 27 percent just like  the second quarter of last year.

Similar to PVs, growth in the two-wheeler segment too had to bear the brunt of a high year-ago base due to shift of the festive season, as well as the increase in insurance premium slabs, which drastically impacted new vehicle on-road prices by as much as 5 to 16 percent. While two-wheelers posted a moderate growth of 5 percent in Q2 of FY2019, in H1 (between April to September), their overall volumes stood at 11,569,770 units (+10.07%). 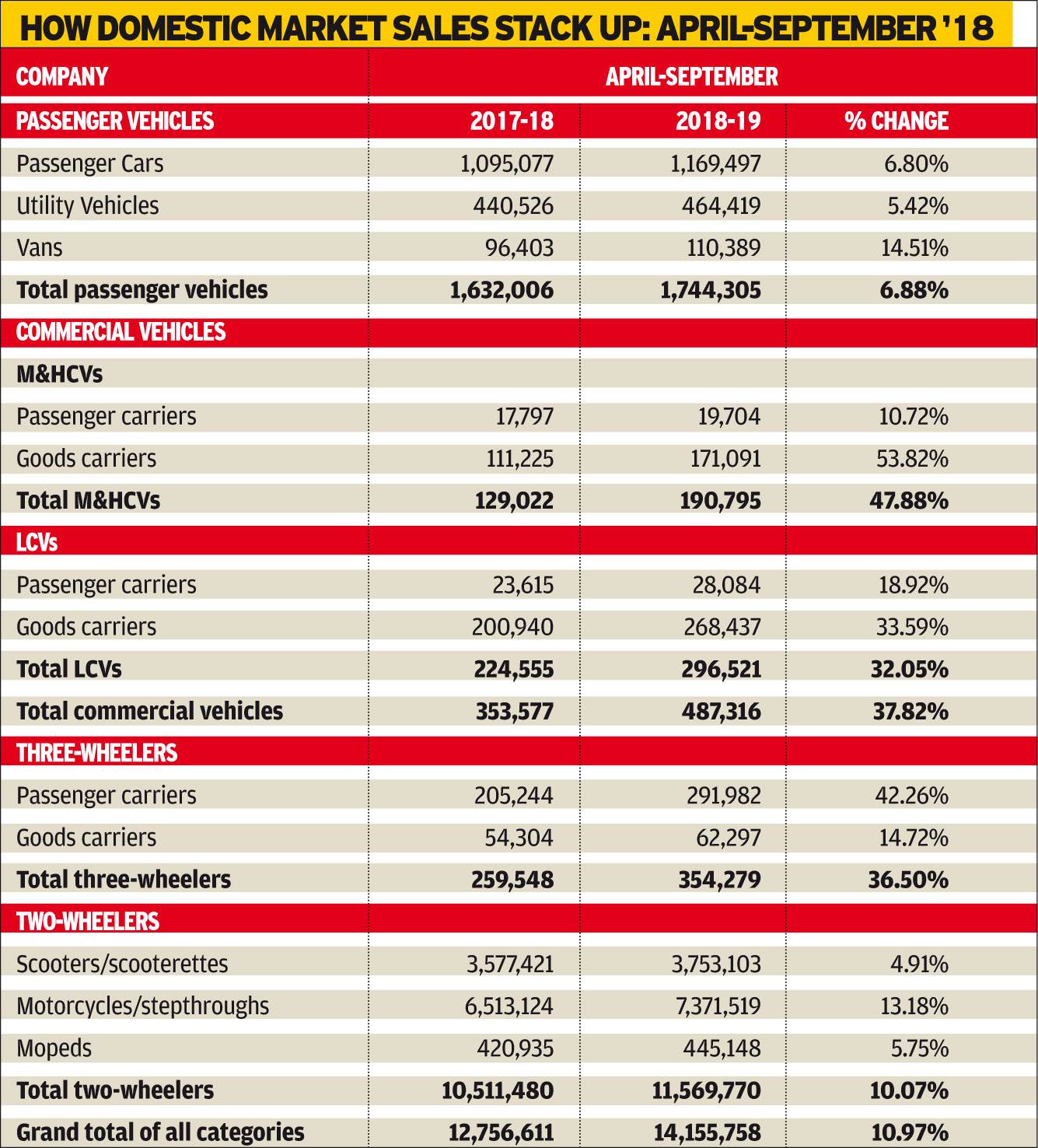 Being optimistic about their performance, Wadhera said, "This growth is set to further increase in the festive season when two-wheelers sell in big numbers."

While scooter sales remained absolutely flat in Q2, motorcycles grew by 8 percent YoY. Wadhera explained and said, "Demand from the rural markets, which majorly is attributed to motorcycle sales, is driving two-wheeler growth."

The H1 FY2018-19 sales data underlines that the two-wheeler industry has registered total domestic sales of 115,69,770 units, marking  YoY growth of 10.07 percent during the April-September 2018 period.

Notably, the motorcycle segment has outperformed the scooter category, which appears to have come to a standstill. With cumulative domestic sales of 73,71,519 units in H1 FY2019, the motorcycle segment has recorded YoY growth of 13.18 percent; in comparison, scooter growth stands at 4.91 percent YoY with total sales of 37,53,103 units for the period.

Mopeds, on the other hand, have recorded total sales of 4,45,148 units and have grown by 5.75 percent YoY during the period.

The two-wheeler industry leader, Hero MotoCorp, which has registered YoY growth of 6.41 percent in September, has grown by 9.18 percent during H1 FY2019. While its H1 growth in its motorcycle sales is 12 percent YoY, its scooter sales have declined by 11.80 percent YoY.

The scooter market leader, Honda Motorcycle & Scooter India (HMSI), which has registered a decline of 8.67 percent YoY in its September (overall) sales, has grown by a flat 4.03 percent YoY in scooter sales during H1 FY2019.

In contrast, Bajaj Auto, which sells only motorcycles in the two-wheeler market, has grown by 10.35 percent YoY in September and by 27.37 percent YoY in H1 FY2019.

A number of factors can be attributed to this shift, which marks a reverse order for the growing scooterisation and is in favour of the traditional mode of commuting across the local markets in India. Firstly, the floods in Kerala, which is a substantial market for scooters, impacted sales. Secondly, West Bengal, which according to YS Guleria, senior VP, marketing & sales at HMSI, accounts for about five percent of the total two-wheeler demand, is known to have issued an advisory making it mandatory for the buyers to possess license. This, as Guleria told Autocar Professional, has resulted in sales collapsing by about 50 percent July onwards.

The difference of about Rs 10,000 and more is understood to be one of the key factors driving away price-sensitive buyers to purchase 100cc bikes.

Commenting on sales for September 2018, Anupama Arora, VP and sector head, Corporate Sector Ratings, ICRA says, “Two-wheeler volume growth of 4.1 percent in domestic sales in September 2018 comes on an expanded base of the previous fiscal that benefited from the festive season. Also, the sharp rise in insurance premium to include third party liability cover for five years, as well as an increase in personal accident cover, resulted in a sharp increase in the acquisition cost of vehicles. This compelled customers to postpone purchases to the festive season, anticipating promotional schemes.”

Forecasting growth for FY2019, she adds, “We expect two-wheeler volumes to grow at 8-10 percent, led by continued recovery in the larger bike  segment, even as the scooter segment may pick up pace after a modest run in the past five months.”

CV sales moderate in September but still up 24 percent

After sustained accelerated growth of around 40 percent in the first five months of the ongoing fiscal year, commercial vehicle sales appear to be  moderating. Nonetheless, numbers from four leading CV OEMs reveal strong double-digit growth of 24 percent year on year.  What is enabling continued demand is the sustained infrastructure spend on the part of the government, improving demand from the logistics sector and intra- and inter-city transportation. If there is any slowdown, then both the M&HCV and LCV segments remain resilient to that.

Also, the increase in axle load limit, announced in July for HCVs, has not dampened growth as there is still strong demand for tippers, tractor trailers and trucks carrying voluminous goods. The focus on building highways across the country, construction activities and government focus on job creation through infra spending augur well for the CV sector in election year. The industry is well on its course to record yet another year of robust growth.

Commercial vehicle market leader Tata Motors sold 46,169 units in September 2018, up by 26 percent YoY (September 2017: 36,678). Its M&HCV truck sales grew by a strong 32 percent to 16,239 units, while ILCV numbers remained strong with sales of 5,465 units, and growing 23 percent YoY. The cargo SCVs and pickups together witnessed sale of 19,846 units (+ 27%); this higher growth is led by SCV Cargo (<1 ton payload) along with growth in the e-commerce sector as also the evolution of the hub-and-spoke model and the growing rural consumption, which are all driving small vehicle demand for last-mile connectivity operations. Tata Motors also sold 4,619 commercial passenger carriers (buses) (+6%), helped by sales in the STU and ambulance segments.

All put together, the CV segment continues to drive along in growth lane with few impediments expected this fiscal. 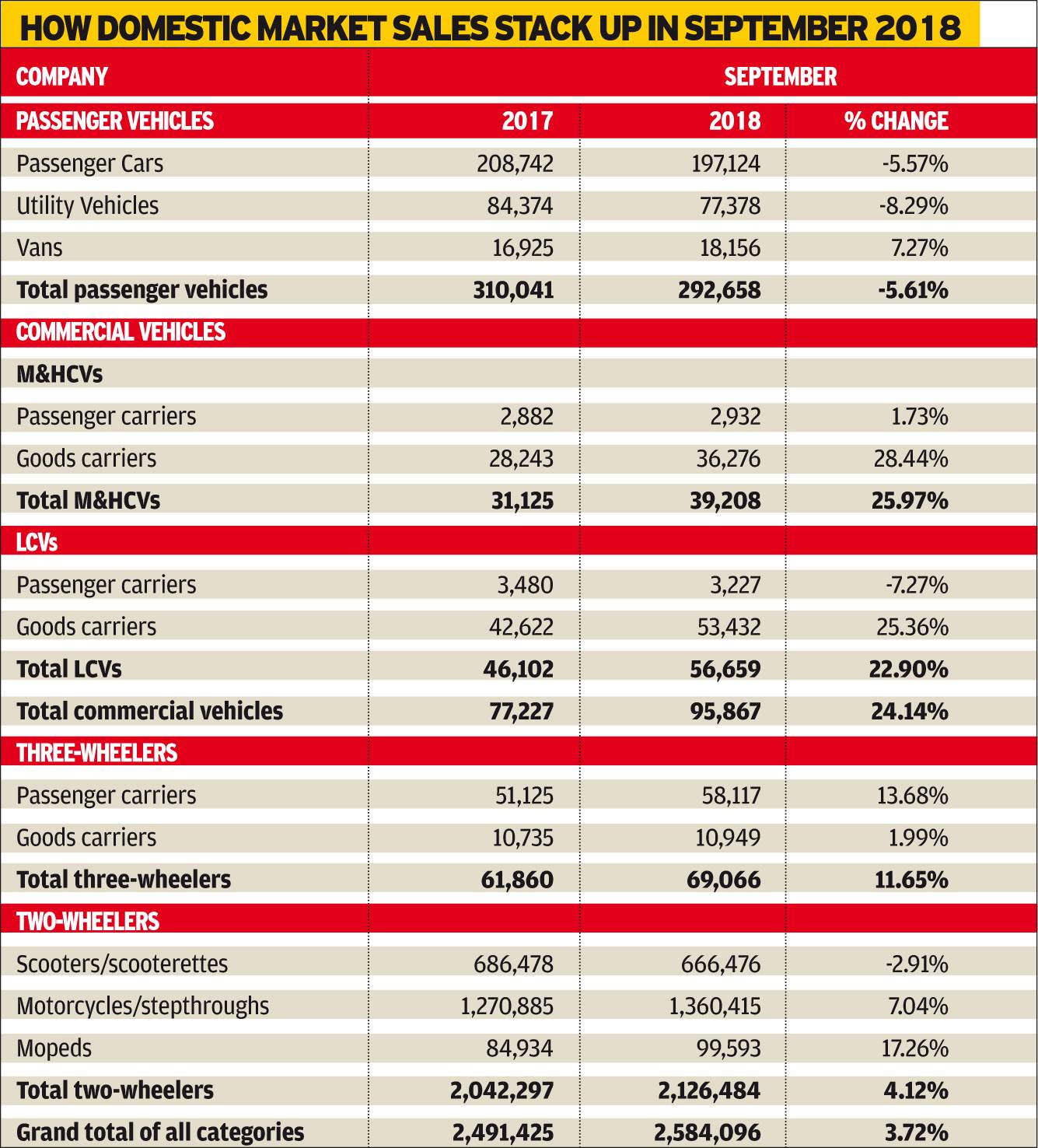 While PV exports remained almost flat at 1 percent in Q2, CV and two-wheeler despatches grew by 23 percent each, with three-wheelers hitting 51 percent.

Commodity prices also bettered in the recent past, with key materials such as steel, pig iron, copper, natural rubber and aluminium, all improving just between Q1 and Q2.

On the other hand, fuel prices, which have been consistently on a boil over the last few months, saw the average prices reach their pinnacle in September, with petrol hovering around Rs 80.4 a litre and diesel at Rs 72.3 in the national capital, with a marginal gap of only Rs 8 left between the two fuels. As a result, what used to be a 43 percent (FY2013) skew towards sale of diesel passenger vehicles, the trend has significantly shifted in favour of petrol, with diesel cars only accounting for 23 percent of the overall sales. UVs, however, still see diesel as the preferred fuel type, with 83 percent of such models remaining oil burners.

With good rainfall being received across most parts of the country, barring only a few states like Gujarat and Bihar, the industry anticipates good rural demand in the coming months, and helping drive demand. While the government’s focus on agricultural and rural development as well as on increasing banking reforms are being viewed as the growth drivers for the industry, factors such as fast-rising crude and petrol/diesel prices, and increase in insurance policy premiums remain the major challenges impacting industry’s growth in the near future.

“Based on the government’s initiatives, we see our outlook to remain positive for the fiscal. We continue to maintain a 9 percent growth forecast for the PV segment until end-FY2019. The industry will write a good growth story for the next three months and we are looking forward to a good festive season, which will be a trigger to revive our growth trajectory,” Wadhera concluded. 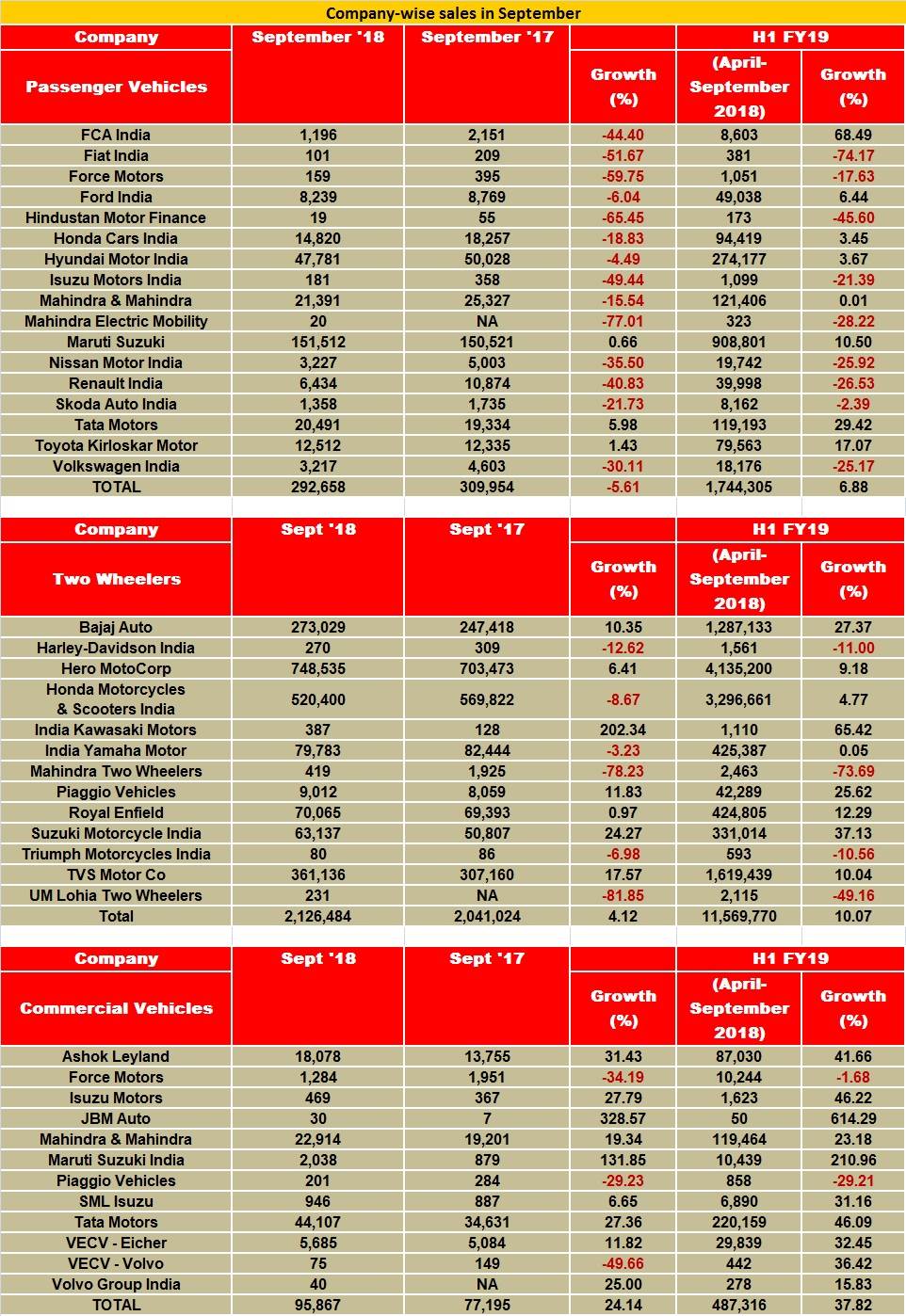