The longstanding UV chart toppers continue their reign but there’s brand new competition which has entered the fray. 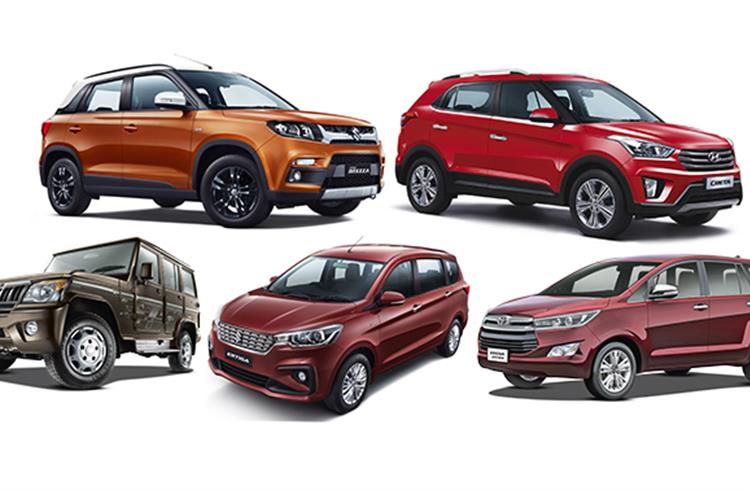 The utility vehicle (UV) segment, once the powerhouse of the passenger vehicle segment in India, has been caught in a bind for sometime now, impacted by factors such as fuel efficiency of these relatively heavier vehicles becoming important to customers in times of fuel price uncertainty. Also, vehicle buyers are wary of making new purchases at this juncture as the country nears general elections in May.

While Nissan launched the Kicks, Tata Motors brought out the Harrier, arch rival Mahindra & Mahindra launched the XUV3OO crossover on February 14, Hyundai, Kia Motors, and MG Motor India are all in the queque to belt out more UVs in the days to come. Let’s take a look at how UVs performed in January.

Maruti’s Vitara Brezza maintained its reign and continued to lead the pack of the top five UVs, selling 13,172 units in the month (January 2018: 11,785). The popular crossover has been one of the growth drivers for the company’s UV market share, which today stands at 28.34 percent, with cumulative sales of 764,995 units, clocked between April and January 2019.

The Brezza is the sole offering amidst the stiff competition to be playing in a diesel-only avatar in the market, and with BS VI expected to skew the mix significantly towards petrol, Maruti Suzuki is known to be in the works on a petrol variant as well.

The scale of the Vitara Brezza’s success can be seen in the fact that the compact SUV has driven past the 400,000 cumulative sales milestone in 35 months since launch in March 2016.

At No. 2, the Hyundai Creta maintains its position in the tally with sales on the uptick and clocking 10,314 units (January 2018: 9,284). Expecting a rise in competition from recent entrants – Nissan Kicks, Tata Harrier and the Mahindra XUV 3OO – Hyundai is learned to have added more features to the popular crossover, wherein the Creta now gets an ‘SX Executive’ top-trim offering ventilated seats, a segment-first feature at a premium of around Rs 30,000.

While the rugged Mahindra Bolero maintains its spot in the list, the UV, however, declined slightly in terms of the overall numbers. The Bolero sold 7,998 units in January, with most of the numbers coming in from rural and Tier 2 markets (January 2018: 8,206).

Launched in November 2018, the latest iteration of the Maruti Ertiga is creating some waves for the company. The Ertiga made its entry into the list at the No. 3 position and with a compelling package, garnered sales of 6,352 units, where a CNG variant which entices the fleet operators is yet to be introduced. The bi-fuel option  will be offered in its new 1.5-litre petrol engine.

The quintessential MPV of the Indian market – the Toyota Innova Crysta – faced some heat from  Maruti's seven-seater and declined to the No. 5 spot, registering sales of 6,283 units. The Crysta had clocked 7,028 units in January 2018 and now bears competition from Mahindra's Marazzo as well.

While fuel prices have certainly had an impact on UV sales, the vehicle category remains the top one to be seeing fresh developmental investments from global OEMs the world over. Hyundai's Carlino Concept, Kia's SP Concept and MG's Hector are the products to watch out for in 2019. Will they add some spice to this list? Stay tuned.